So, it had been a bit of a crazy weekend between desperately trying to get a party hat Pikachu before they left today and also getting a Nintendo Switch. I had been wanting to talk about this for a while, but just have not gotten the chance. I’ll get to more of that soon, but for now, let’s get to the start of it all. I will admit this does go into a bit more personal stuff so if you’d rather just stick to more game-focused things, I’d either skip to where I start talking about Pokemon GO or wait until my entry sometime later this week about the latest Story of Seasons game :) But yes, moving on…

With the weather being so… odd lately (in fact, it was quite cold today, is supposed to be hot tomorrow, and then snow sometime later this week…), it’s hard for me to really feel up to doing much lately. I’ll start to feel better and then suddenly feel like I’ve been hit with a bag of bricks and it’s the absolute worst and reminds me of some of my worst days when I was younger. That said, with the fact that this has been something that has been effecting both my husband and myself these last few months, we had a feeling we just might not be able to do the Nintendo World launch event for a Switch. Until the weather normalizes a bit or our allergies get used to it, we both would just end up being very sick by having to wait on line for 24+ hours. Thus, we decided to fully depend on Amazon this time around.

Due to the aforementioned issues, things weren’t going as smoothly though. I at least managed to get the Grey Nintendo Switch and the Special Edition of Breath of the Wild (sadly not the Master) right as Amazon put them, but I missed the Neon Switch (which was put up later), the Amiibo, and the Pro Controller which was pretty discouraging.

Regardless, I was glad I at least got the system and felt, even if we couldn’t get to the launch, at least we’d still have the system, right? And as I heard of some Master Editions being cancelled, I felt maybe it was okay that we only managed to get the Special Edition. Until my order didn’t update on Thursday. Or Friday. And thus, like many others, it seems our preordered Nintendo Switch was currently unavailable.

While I generally may have been able to wait, The Legend of Zelda is one of Mark’s favorite game series and he’d been excited for it since it was just announced as the next Legend of Zelda. And thus, I was pretty upset. Especially as I felt it was my fault for not encouraging us to go to the launch more where, even if maybe it wouldn’t have been the best choice for many many reasons, we would have at least got the system. Heck, we probably would’ve gotten everything else we wanted to. While I was able to somehow preorder all the Amiibo from Best Buy a few weeks ago (which thankfully did all come), we did still want the Pro Controller and who knows, maybe by some miracle they even had Master Editions.

Regardless, I was at a loss and didn’t know what to do. That was when I stumbled upon someone mentioning that the Nintendo NY Store still had Nintendo Switches and even some Master Editions along with plenty of many other things. They mentioned it taking about 15-20 minutes, but I was set and with some help (because I was just not doing great, driving wasn’t really an option), I was off.

The car ride took forever due to so much traffic. I did, however, hatch my 10KM Egg in Pokemon GO and get a Chansey which made me feel like maybe, things would work out and I’d get lucky. I also managed to FINALLY get some Party Hat Pikachu–both males and I was unable to get a female, but at least I’ll have one Party Hat Pikachu and Raichu now… Unfortunately, I wasn’t really dressed to be waiting long due to rushing (I wore a dress–I probably should have worn pants) and it was very cold. The line took about 40 minutes, but thanks to some nice people in front of me for talking to me on line, it made it a lot more bearable and helped me get my mind off a lot of it.

And despite all the craziness (and feeling even worse due to how hot it was in store compared to the coldness of outside), I did manage to get everything we wanted–the Neon Nintendo Switch, the Master Edition of Breath of the Wild, and a Pro Controller. 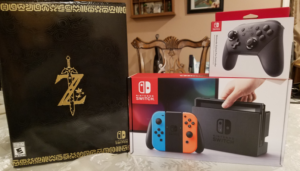 I might have picked up Bomberman too, but it was already sold out. Regardless, I hope we’ll be able to get it soon. One thing I was really surprised about though is I only managed to get 8 StreetPasses… I’m really worried I may not be able to finish the StreetPass games at this point :/ I did complete the main “goal” of Market Crashers though with the most recent group: And I did at least take some other pictures in the store as well: 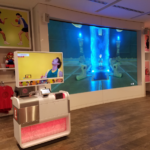 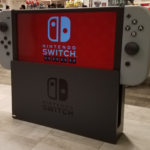 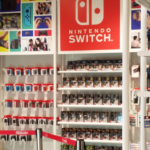 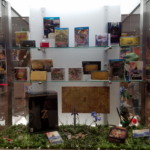 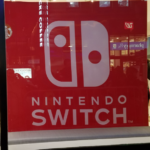 We’ve been having fun playing Zelda since (I mean, we do sleep at points but besides that :P) and I’ve even gotten a Pink Horse I named Shortcake (because Strawberry was too long :( ): 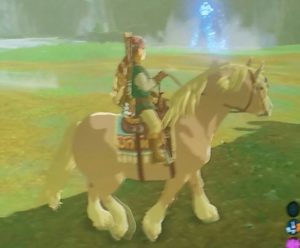 I plan to give it the flower mane.

I’m also hoping to find a plain pink horse to give the teal mane and name after the My Little Pony that was made for me: I feel like it’ll be a long time before the game is done due to all the exploring. I don’t see us finishing the main plot until every other thing is done.

Moving onto Pokemon GO again, as I mentioned, I got a Chansey and two Party Hat Pikachu on Friday! Unfortunately, I wasn’t able to get more to either evolve one or get a pair of females as well now that gender differences are in. I really wish they were around longer and had their percentages upped again. They only had them upped once and that was halfway through the event and it still wasn’t enough for me to see them around my neighborhood at all. If I hadn’t run into Manhattan, I never would have gotten any Party Hat Pikachu :/

There’s a lot I like about Pokemon GO, but it just keeps finding new ways to disappoint me mechanic-wise. That said, right now Sprint and Pokemon GO have a fairly neat Rewards Program that will let you redeem some neat stuff including $10 gift cards for Apple Store and Google Playstore. There apparently will be special events as well and you do not need to have Sprint as your phone provider to participate.

Meanwhile, moving onto Fire Emblem Heroes, they are doing their new voting today. I’m stuck between Lucina and Elise, but something tells me Lucina is going to blow the entire competition away… Speaking of Elise, I FINALLY got her thanks to the new Princess Focus. Now Linde is the last super wanted character on my list. I’d like to get Azura as well, but she’s a much lower priority and I’m still debating on Klein who is in the Sibling focus.

I’m keeping an eye out for Super Mario Run’s Android release. I really hope my IOS progress carries over considering I connected it to my Nintendo ID, but I’m really worried it won’t be… Fingers crossed anyway.

I also am super curious about the Animal Crossing one, but still concerned. Regardless, I’m going to stay positive.

Besides BotW and Mobile stuff, I’ve mostly been playing Story of Seasons: Trio of Towns, but that will wait until my next entry~

Finally, here’s some lovely pictures of all the Master Edition stuff: 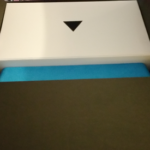 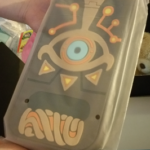 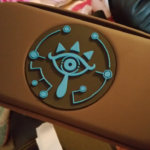 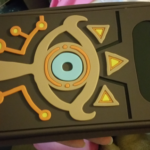 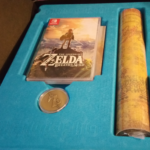 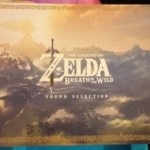 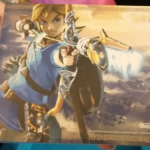 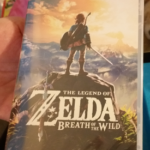 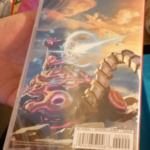 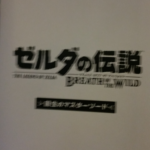 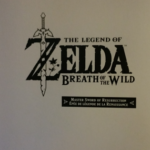 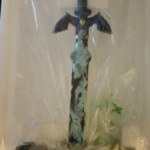 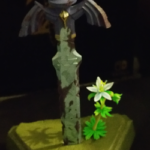 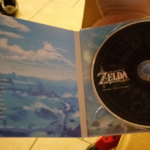