So, if you’re new here, you may be wondering why I’d be talking about something like Club Penguin Island. The short answer is I played Club Penguin, so why wouldn’t I try the new version of the game? The long version is that, no matter how many years have passed, I’ve always had a soft-spot for Multiplayer Online games. What separates Browser games like these and MMORPGs, which tend to be what jumps into mind first if you mention an MMO, is that Browser MMOs tend to be more relaxing. There are definitely some that are very similar to the MMORPGs, but most of the time, the key things you do in Browser MMOs are Explore, Collect, and/or Dress-up and those are the three things that I tend to enjoy most in games.

Even though I didn’t play Club Penguin much anymore, I did at least try and poke in for events and other things. I had a lot of items I really loved and an Igloo I enjoyed and while there were also many items I missed that I would have liked, I still enjoyed checking out the new parties and new items so I was upset to see they were closing the original to make way for a new mobile-based game. In general, while I don’t necessarily mind mobile games, I kind of hate touch screens and find them uncomfortable to play along with many being common games with super pay to win aspects and/or forced waiting/stamina bars.

The biggest difference between the Mobile game and the original Club Penguin is a huge graphic upgrade and full voice acting. And I’ll be honest, I could care less about either of those. As Club Penguin Island stands right now, it’s kind of disappointing for one specific reason only: There’s not much to do. I mean, my Penguin is pretty cute, but I’ve still essentially run out of things to do: 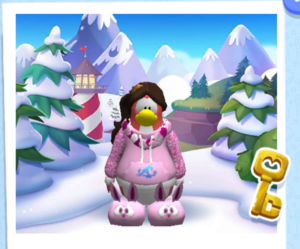 When there is stuff to do, ignoring the awful controls, it’s actually pretty fun. Unfortunately, Adventures and some of the Daily Missions are exclusive to Members and while there is a free trial for a week, it gives very little for non-members to do. And the trial would seem more rewarding if you literally didn’t get stuck waiting until the next day to do things again.

I really adore the Adventure feature, but despite doing all my daily missions, I did not get my “Pirate Status” up enough for Rockhopper’s next mission and Aunt Arctic’s next mission will not be available until tomorrow. This is an example of what I mean by forced waiting. It wouldn’t be so bad if there were other things to do, but the adventures are currently the funnest part of the game.

More or less, the things you can do in the game are:
1. Explore one of 3 Maps (the Boardwalk, Cove, and Cave–you can also dive underwater which can bring you to a few tiny areas, but not much you can do in those places)
2. Collect coins and various items to trade in for coins.
3. Adventure
4. Buy and/or Make Clothes (Creating clothes is exclusive to members though)

The only Clothes you can buy right now are Disney Collaborative stuff. Otherwise, you can spend your coins on “Party Supplies” which are cheap holdable items that you can interact with/use. You can also interact with certain things in the environment, but in general, the game feels much more geared to social aspects and if you’re not chatting/hanging out with people, the only thing to really do otherwise after finishing your Adventures and Dailies is to earn coins.

And Coins just… don’t have enough use right now. I mean, I guess saving up is good, but most stuff respawns and there isn’t really a huge rush. Maybe if you’re not a Member as the things that give the most coins are locked out (Adventures and Fishing–only limited to 10 a day as a Member as it is), but I don’t even know if you’ll be spending as much without using the Clothes making feature. I will admit that feature is pretty cool. You get several options and multiple ways to add colors. My only real issue with it is some areas seem to be very limited on how many decals you can add. For example, I wanted to add a kind of belt design to the bottom of a top I had to make and it would not let me add more than one decal to it which made it impossible to do.

Similarly, I don’t really care for the daily missions that require you to wear a certain outfit to finish as it’s often caused me to have to make an outfit I’ll never wear again.

Regardless, it’s like… it could be fun? But there’s just so little to do and the forced time limit on the Adventures makes that stand out even more. I had fun swimming around in the Cave once and exploring all the different areas and finding the throne room, but I’m not going to bother much. And the amount of coins you get for trading items in is so small compared to what you get from Adventures and Missions it just doesn’t feel worth it. I spent a long time collecting everything in each map–Flowers, Coconuts, Seashells, Pearls, Crystals, Crystal Clusters, and more and only got 40-50 each time upon trading everything in. It just didn’t feel worth it to do and after constantly running into multiple technical issues (Free Trial glitch where it didn’t activate and yet said I had it already, constant crashes, some disconnects, etc. I played the opening segment so many times due to things just not working), I stopped playing for the day after maybe only 30 minutes to an hour of actual play time. Which was after 2 hours of issues.

In general, just being able to play or do other things.. Like I hoped maybe I could place the items I found somewhere or like, with the fish I caught, maybe I could hold a fish bowl with them or eventually get them in a igloo-like feature or something, but instead they are automatically turned into coins. 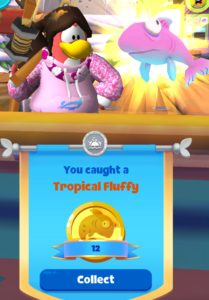 And some of the fish are really nice.

I get that it just came out, but when you just close a game that was opened for years for something that has less areas than the original started, it stands out as an issue. And graphics and voice acting pretty it up, but that doesn’t fix the fact that it’s just… not that fun right now. I’d easily take the old flat graphics and lack of voice acting (heck, I usually played Club Penguin with the sound off) just to have more things to do right now. 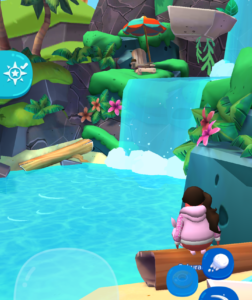 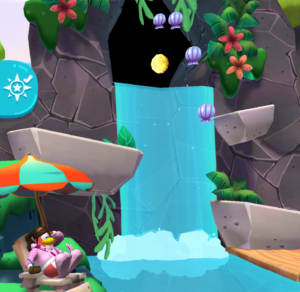 There’s no minigames and there’s not much to explore and there’s nothing really to buy. I’ll keep checking in and trying to play and do the Adventures, but I don’t know if I’ll keep up with it once my membership ends.

I will say though that the Controls are my least favorite part though. You’re essentially supposed to play it with two hands–your left thumb being used in a box to move your Penguin around and your right thumb for all interactions and jumping. I had so many issues getting my Penguin to move properly and this made some of the platforming super frustrating and nervewracking to do. This kind of movement should be on a computer or with a controller–not a touch screen.

Poptropica is also going to the route of switching to a new game system due to it being such a big upgrade, but the difference there is that they are keeping the original version up and also letting the new version be available and connected through both mobile and the web which is… great. I probably would be less frustrated with Club Penguin Island if I could play it on the computer like I will be able to with Poptropica Worlds. I’m still apprehensive on that too and also sad a lot of stuff will, once again, not carry over, but I’m looking forward to seeing what new things will be there.

If there is one thing though that has stood out for me from all this though, it’s more on what Animal Crossing Mobile could be too. I’ve mentioned before that I’m fairly worried/apprehensive about it despite my excitement, but this kind of made me think of what I’d like to do. Being able to explore around a town and interact with the World and Collect and not so much building a town so much as taking the simpler parts of Animal Crossing and making it into a fun collectible dress-up game where you can do quests and explore. I don’t want a full Animal Crossing game in mobile format, but considering how Fire Emblem Heroes is a simplified form, I can kind of see Animal Crossing being done in a similar way to do this. I just hope they will still have a good amount of things to do so waiting doesn’t feel as forced. Part of why you can wait a day or hours in Animal Crossing is you can do things with your fish and plant things and flowers, visit friends, work on making your town something, but when all you have to do is “earn money” with nothing really in sight to spend on, it just feels boring and empty.

I really hope Nintendo will bring up Animal Crossing mobile soon. It keeps getting pushed back. I’d like to think we’ll see it before E3, but if not, maybe it’ll come out with an announcement of a future Animal Crossing game.