So, today was the latest Nintendo Direct :D No matter what, Nintendo Directs never fail to get me excited to see what’s coming soon. If you haven’t seen it yet, you can check it out below!:

Assuming you have seen it already though, I’ll be doing my usual thing and talking about what interested me the most among various other tidbits. Thus, I won’t talk about everything, but I hope you enjoy my thoughts regardless!

Nintendo started up with Pikmin which is always a weird case for me. I adore Pikmin and the characters, but I don’t enjoy the actual games at all. I had been excited to try the first one, but ended up getting too stressed out by the end of it and… more than a little upset when I saw all my Pikmin get eaten. It came out when I was 12 so maybe it wasn’t too much of an overreaction, but it’s something that permanently ruined the series for me. Despite those issues, as mentioned, I really love the Pikmin and so I was really excited to see this Amiibo that will be launching on the game July 28th: 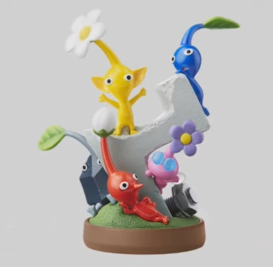 Ever Oasis was brought up next and I am still so excited for that game. It genuinely looks really fun. The game looks so pretty too and I just love the art style so much. 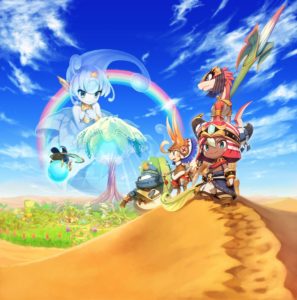 It’s just really beautiful. But most importantly, this plushie needs to be available to buy because I love it and need it: 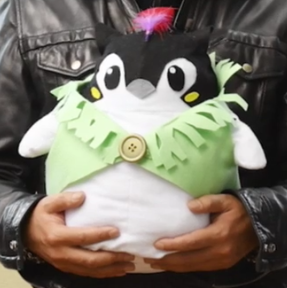 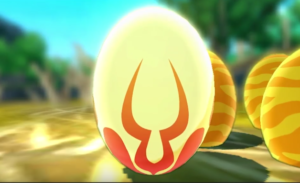 Depending on how essential the battling is and how the Egg hatching works, I might actually pick it up. I may even be able to deal with the battling as long as everything else looks great. I just don’t want a situation of “there’s this one rarer species but all the eggs look the same so have fun hatching 500 bazillion of the same egg to try and get the rare one!!” because that just… isn’t fun. At the very least, I’m probably going to keep an eye out for new information regarding it.

Around this time, Lady Layton starting playing on the Japanese Nintendo Direct AND I WANT IT SO BADLY.

There was no news for it here in the US just yet, but I really hope we’ll hear something soon… It comes out 2 days after my birthday in Japan T~T <3 Going back to the US Nintendo Direct, MIITOPIA! I'M SO HAPPY IT'S COMING OVER! I can't wait to play it. 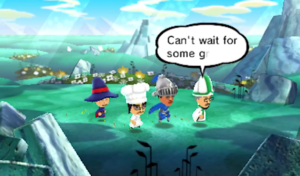 At the moment, we just know it’s coming this year, but that’s more than enough for me.

Next up was Kirby and standing out to me the most from the selection was the Team Kirby Clash Deluxe. It’s already available to get now, but I’m not sure if I will try it just yet. 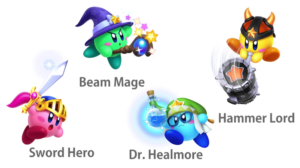 I kind of wish the colors weren’t locked into what skill Kirby has though. I am intrigued by the new multiplayer action game for the holidays as well, but until we have more information, I don’t have much else to say about it. Except that I want the Crystal Shards cast back :( 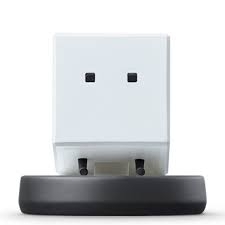 I guess I’ll have to look into importing :(

While the Qbby Amiibo went unmentioned, we did hear about a large amount of other new Amiibo coming soon besides the Pikmin Amiibo. For one, three new Legend of Zelda Amiibo featuring Link from Majora’s Mask, Twilight Princess, and Skyward Sword respectively.

I’m hoping they may do a reprint of the original Zelda Amiibo as well with these as Breath of the Wild has made them hard to find. And I am continuing to kick myself for not getting a Sheik Amiibo :(

The new Smash Amiibo were also finally announced. Everyone knew they were coming–they promised afterall, but everyone was wondering when and apparently the answer was this July.

We’ll probably get both Cloud, female Corrin, and maybe a Bayonetta Amiibo. I’m personally leaning towards the one in the front.

New Splatoon Amiibo were announced as well to go with Splatoon 2: 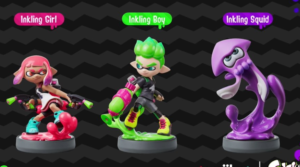 We’ll get all three, but I’ll talk about them more when we get to Splatoon 2 :)

After the Amiibo showcase, next up was ARMS. ARMS is such a weird case for me because it kind of looks fun and I enjoyed playing it when I got to try it out at the Switch Preview Event, but I feel like its a game I would just end up not having much fun with after. I’m not a huge fighting game person and it’s really the story and background things that get me interested or it’s more of a party fighter. The team fighting thing sounds neat, but I’m still not sure if it’s enough to get me into it. That said, the fighter designs are all really cool and Minmin looks great:

I adore her design and while she doesn’t beat out Ribbon Girl for me, it makes me excited to hopefully see more fighters in the game.

Just briefly on Sonic Forces: I want to get into this game, but it’s still not pulling me in yet. Crossing my fingers for Chao Gardens and a lot of extra stuff because I still don’t have as much fun with 2D Sonic and have mixed feelings with on rail segments, though, the day stages in Unleashed WERE pretty fun and it looks like that is where the inspiration came from so fingers crossed.

One other brief interlude is Monopoly for the Switch. One of my all-time favorite versions of Monopoly was an old PC version where when you landed on a space, it would show you this gorgeous animated Picture-esque version of it. Seeing how animated it looks in the Switch version is kind of making me hope for that. 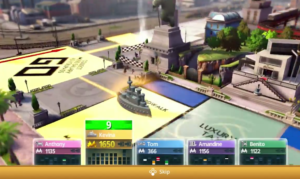 I don’t know if I’d get it, but I feel intrigued regardless.

Speaking of brief interludes, Rayman Legends Definitive Edition :P This is a game we got to try out during the Wii U launch, but due to it being pushed back for whatever reasons, we ended up not getting it as there were higher priorities at the time. Maybe we can finally get this version this year. As long as something else doesn’t come up.

Finally, we’re onto Splatoon 2! I’ll be honest, I’m a LITTLE suspicious of Grizzco Industries, but at the same time, I’m just SO excited for some kind of PVE Feature. Salmon Run looks so much fun and despite the ugly outfits, I’m just really looking forward to playing it. 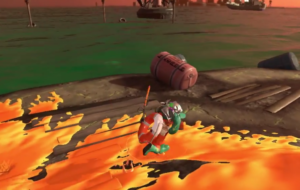 I kind of hope you might actually get to switch outfits to some extent. I also hope you can play together locally. Like 2 people can go online together with a Split Screen. I’d love that for the normal modes too. I’m just not a huge PVP person and I would have a lot more fun if my husband and I could actually play the main game together this time without needing a second system.

Regardless, there’s a lot I’m looking forward to along with the whole revive thing with the lifesaver. After showing off this move, we were shown the new Amiibo (as I mentioned above) and how they work. One of the things I really like is you’ll be able to save outfits and hang out with the Amiibo. Since the old ones will be compatible as well, I wonder if you can hang out with them too? 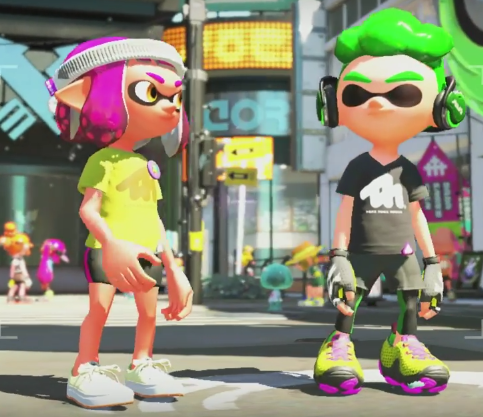 That said, I do have some concerns as it looks like stats are still tied to clothing (I hope we can change EVERYTHING this time and there’s a better re-rolling/skill switch system) and there’s only four hairstyles: 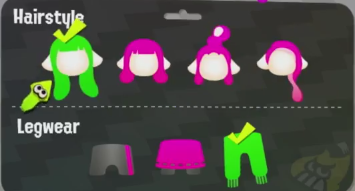 I’m really hoping we’ll be able to unlock more. I’ll probably use the original style or the 4th style. On the bright side, I’m very happy about skirts!

At the very least, despite my worries, this has definitely made me excited for Splatoon 2 and I am looking forward to it when it comes out a few days after my birthday!