So, Microsoft started with their “new” console today, or well, upgraded one as Xbox One X. Which is just… genuinely not a great name? I think if anything, especially after the Wii U, people would realize maybe more unique names would be good. The big deal? It’s faster and has 4K resolution. 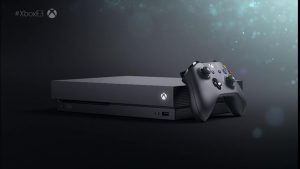 Except… for me, neither of those are big deals. Ignoring that I don’t even have a 4K TV screen, I’m one of those people who really just stop noticing the differences at this point and so, a bigger resolution is meaningless for me. I also can’t care too much about it being faster as I just… don’t mind waiting much. As it is, we’ve only gotten two games on Xbox One–Sunset Overdrive and Rise of the Tomb Raider, which if it wasn’t for the fact that it came out several months for Xbox One first, we probably would’ve gotten it on PS4 like the first one. We beat the games once and that was it though, so…

I’d also like to point out that the fact that this is now their smallest system has ruined the point of the Xbox S so umm….. Moving past the system, Forza is pretty weird for me as it’s a game I keep meaning to get and everytime something comes up. 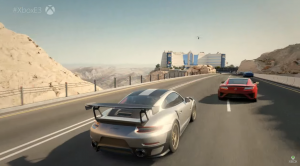 That said, I think part of it is that they focus on the graphics and areas and not so much the actual mechanics and things you can actually do in the game, besides, well, race. Also all Racing games need Beetles. Or at least a lovely Horse Carriage.

After many games I didn’t care about (STOP THE ZOMBIES AND POST APOCALYPTIC ADVENTURES. IT’S OVERDONE AND SO ANNOYING) a brief comment on Minecraft that I really can’t expand on, and a few other random tweets that also don’t really get expanded on…

…We got more information on Sea of Thieves which I genuinely do think looks really nice? Plus I love riddles.

It kind of reminds me of Endless Ocean and I want to explore and collect stuff with friends and sail around and it just looks really fun. I just hope people can play together using the same console. 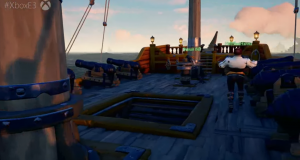 Regardless, this is the first game of the night where it’s one I’d likely get at launch, though, more likely for the PC than the Xbox One. Sad to see it was pushed back to 2018 though, but still looking forward to it and hope we get a more concrete date for it soon.

Next up was a new game which I was very surprised to see. It actually looks really cut and reminds me of the 3D Mario Platformers and Sonic Adventure and I actually really want to play it?

LOOK AT THOSE CUTE GHOSTS AND CARVNIVAL GAMES. So, Super Lucky’s Tale is on my list. And this one I will likely actually play on my Xbox One and also another “must get at launch” title for me.

We then had an Indie trailer and I really wish they spent more time on them? There’s more I’m definitely curious about, but I will take this moment to talk about Ooblets which I am very excited for and plan to get for PC and already have it wishlisted on steam. The game is inspired by some of my own favorite titles–Harvest Moon, Pokemon, and Animal Crossing. You get to plant, grow, and collect Ooblets along with having a customizeable house and character.

There are no words for how excited I am for it–it’s not coming out until 2018, but that in no way dims the excitement. It’s supposed to be shown during the PC Gaming Show tomorrow as well with a surprise so I’ll be sure to talk about it more then :)

Ori and the Will of the Wisps looks very pretty. I never played Ori and the Blind Forest, though, it was on my list… but I heard it was quite sad and well, this game definitely looks like it’ll go that direction too. I really appreciated the live piano playing though. I love pianos.

And that pretty much sums up my Microsoft thoughts! I actually had a lot more to say than I expected and even have multiple games I’m excited for so I’m pretty satisfied, honestly. Bethesda is up later tonight and while I’m not expecting too much, it should still be fun! For now, I’m totally watching the Sea of Thieves co-stream though :P

I’m going to say right now that it’s very likely I will have nothing to say, if anything. I really haven’t played Bethesda games–in fact, the only one I’ve played was a tiny bit of Elder Scrolls Online with my husband. But who knows, maybe there could be a surprise tonight and I do like the Amusement Park theme.

While there were parts of Elder Scrolls Online we had fun, I think the general thing was it just felt kind of a soul-less game with most of the story lacking. While the new area does look nice, I just don’t think it’s enough to get me back into it when I’ve already missed enough (But at least the Bear ended up surviving). In the meantime, please look at this adorable Mudcrab I screencapped from the Creation Club part because it’s the only thing I’ve liked so far: 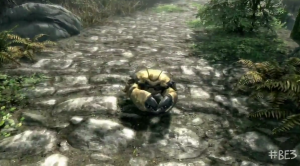 Amiibo support in Skyrim for Switch is definitely interesting though. While I’m still not too interested in Skyrim, I’m curious if other Amiibo could end up being able to be used for the Switch as well. 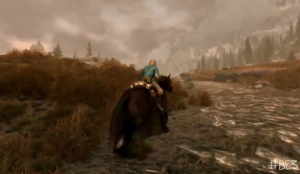 I’m guessing we’ll hear more during Nintendo’s on Tuesday if so.

The finisher for Bethesda was… very weird. From the shorts at the beginning, I kind of liked Liesel though? Peggy’s outfit was cute and Liesel was pretty cool, though, clearly needed more training. 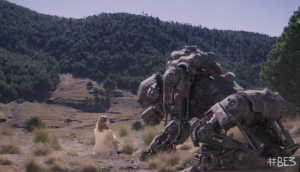 And yep, I was more interested in that random weird short on the TV than the game itself so as expected, this was pretty short. But it was longer than I expected it to get so that’s something! I’d have brought up the cute little animated Chameleon that was completely out of place, but the commentary at the end ruined that for me SO….

But yes, tomorrow is the PC Gaming Show, Ubisoft, and Sony :) Looking forward to it!