Lately, there’s been a lot of discussion (even more so than usual) about when/if Phantasy Star Online 2 will ever be released in North America. The game had a playable English demo at PAX 2012 and was scheduled for “early 2013″… and well, now it’s 2014. And Malaysia is getting an English version very soon while there’s still no news for the North American version.

My boyfriend had talked me into playing the Japanese version with an English patch and in the end, I ended up playing longer than he did. He doesn’t play much anymore which stinks as usually if I do have time to play, he’ll want to play something else…

I think it’s a cute game–I’m pretty happy with how my character looks and I’ve made some nice friends. 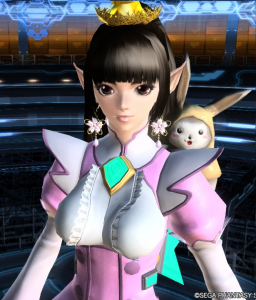 That said, I don’t know for sure if I’d play the English version if one did come out. I don’t like redoing things so… Also, at whatever point they do bring it over, I’m not sure I’d still want to play.

The main issue with the game I have right now are solo quests… the NPCs are just so useless that they aren’t very fun :( And when those are most of the quests I have left (plus I’m hitting the point where you have to do all this crafting and weapon grinding), it’s a bit hard to get motivation to play.

As it is, besides my boyfriend repeatedly dragging me on ESO, he is also really excited for Star Citizen. I am excited by certain prospects of it, but since I’ve never played a game like it, I don’t know what to expect. Right now, I’ve been really loving my little trophy case and fish tank and thus, everyone who has a Golden Ticket taunts me. I don’t care about the skin or anything else, but the little trophy trinket makes me want it so much T__T I really love stuff like that. Trinkets and pets are my things.

The Avenger is probably my favorite ship and I’m happy I managed to get it while LTI was still around. I really wanted to get a Constellation and 325A with LTI, but I couldn’t afford them–I can’t even afford them now. I’m still sad I missed out though.

I’d also, at some point, like to get back to Star Wars: The Old Republic just to finish character stories. But I had such a terrible issue when I quit that I can’t even be excited for things or look forward to that without feeling frustrated. It’s similar to why I left Maple Story (which was one of the few MMOs I really stuck to).

I’d like to find another MMO I can play and completely enjoy, but something tells me I never will. Mostly because people can be jerks. Unfortunately, non-MMOs are less likely to stick around even with DLC around. Like I’m loving being able to explore and collect in Disney Magical World–a game based off a Japanese web game, but there has only been one world DLC which not only is there no confirmation of it coming over to the US just yet, there may never be other DLC like that… Which seems like a shame and a huge missed opportunity. But I’ll keep my hopes up.