So, despite saying I wouldn’t really talk much about stuff from the Direct on Twitter, I couldn’t help it to an extent. For the most part, I’ll just be talking mostly New Horizons in general rather than just what was shown in the Direct last month, but just things I’ve been thinking about a lot.

For the most part, I’m generally excited for the game. It looks fun already, New Leaf brought a ton of new people into the fandom so if region-exclusive stuff does happen again, hopefully everyone will have lots of friends to play with. Not to mention with seasons actually taking the lower hemisphere into account, people can work together to complete their encyclopedias faster than ever before (no time traveling needed).

But I find the main thing I have in mind right now is just… a lot of questions. As games are now region-free, will they pay attention to what shop you get the game from? Will you get to choose a country when you start? Animal Crossing, being a real time game and where things kind of progress as you go, the earliest you can start, the better. Even if I start playing at midnight, it means I can still get ready and prepare as much as I can for the day to start. It may seem silly, but one of the ways I really made progress with Pink Sea was making sure, at the very least, my debt with Nook was paid off each day. So that first debt? Paid off the same day. I worked hard earning bells to pay them off immediately. Same for Public Works projects– I tried not to let any take longer than a day. Plus, I would empty out every single shop and then either sell back or give away the items I didn’t actually want or plan to use. That may be a bit excessive, sure, but it meant I was progressing and unlocking things quicker and for me, that’s the best way I can plan things out.

I’m a super detail oriented person, but I can’t really work in parts– I need to have everything together in order to fully break it down. Anyone who’s watched some of my Happy Home Designer videos may notice I have a tendency to just dump out everything and then from there, work on sorting and placing. I’m not really super into surprises and I like having an idea of what I want ahead of time. Which makes things a little complicated with HHD where with a worldwide release, it’s a little harder to prepare for. Thus, right now, my main goal is just to pay things off quickly and do as much as I can.

I think my main hope is a more “natural” Pink Sea– some of my favorite new items in Pocket Camp have been the waterways. I’d love to see them adapt in some way where, if there is one next to it, it automatically connects in a flowing canal versus wood/stone/etc. patterns at the end of each end irregardless. In general, I’m hoping to see the best things from both Pocket Camp and Happy Home Designer in this game with all the additional items and customization, but I hope it’ll still to AC’s usual pacing and not Pocket Camp’s constant energy as I just can’t keep up with that.

Regardless, I’d really like to keep the game pattern free this time outside of like… the town (or well, island) flag. I don’t really have anything against patterns, but they take a long time and I wouldn’t really call myself artistic. At most, maybe I’ll do recolors of certain existing outfits if anything, but I think Animal Crossing has a lot of great outfits already, especially in Pocket Camp, and with so many new designs, I’m curious how that could effect things. Can we pick different dress styles? Just another thing I’m super curious about. Even if I do go the outfit route, I don’t think I’d want to go the path route again. I’d like to try and keep things just to official items, especially now that we can place any outside.

I would say my biggest worries with the game right now are that the ordinance system is likely not going to return (I’d love to be proven wrong though) and the… fruit energy meter? 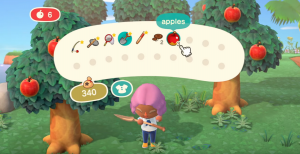 (as a side note, I can’t wait to see all the new hairstyles… come on wavy ponytail that is NOT a sidetail…)

We still don’t really know the full low-down on how this works beyond seeing the character eat an apple, the number go up, and then it going back down 1 as they dug up a tree. And you know, sure, digging up a full tree is a bit crazy, but Animal Crossing isn’t exactly super realistic in the first place. For me, this is just another Quality of Life thing, which is always good in a real time game.

But Animal Crossing has enough walls with paying things off, unlocking shops (Heck, I’m tempted to hoard clothing just in case Gracie has fashion tests again…), and progressing in general. We even have the Nook Miles app which will unlock new recipes.

I don’t want something akin to an energy system. If I want to spend hours picking up and moving every single tree, just let me do it, game. Landscaping is a big deal in Animal Crossing. And like, I get it, fruit doesn’t have much use other than to sell for some early money, trade with friends for other fruit, and look pretty, but to be blunt, not everything needs this big ultimate use. I’m trying to not jump to conclusions on it because we still don’t have much information yet, but it’s one of the things that has me most concerned (The other being crafting, though, it looks like the game is doing it in a fun way).

Moving back to the ordinances, honestly, if it wasn’t for the Beautiful Ordinance, Pink Sea wouldn’t really exist. Or well, it’d be a lot less pink at least. I kind of hate watering. Like if you ever wondered why my Harvest Moon/Story of Seasons fields are filled with grass and I just take care of animals, this is why. I find it way too monotonous and it just doesn’t vary enough for me not to get bored with it. Considering how differently flowers seem to work (with you just harvesting the bulb– it also makes me wonder if the breeding system could be more akin to how it is in Pocket Camp than how it currently works), I’m really curious if they will need to be watered every day still or maybe just to grow or what. At the very least, this’ll make it a lot easier for me to have a bazillion pink flowers.

Despite these few concerns, I just find myself excited about what’s to come while also being super overwhelmed on just how I’m going to set things up. I don’t necessarily want to make a copy of my New Leaf Town, but I do think it’ll be similar as that’s just how my tastes and aesthetic tends to go. While I’m still undecided, I’d like to be able to just have my main character versus three others this time, though, I liked being able to make so many different “house themes”.

I’m curious how big our house can be in this. I think right now, I just am longing for any new details. I don’t really feel impatient as I’m not in any rush to March– I still want to plan and think it all out. But at the same time, I genuinely am looking forward to playing and just seeing how much I can do.