I’ve decided the drop the day count as we get closer to a year and since I played from the start anyway… Regardless, this goes over pretty much everything exciting that happened in New Horizons since my last entry including Flurry’s birthday, new seasonal items, preparing for Festivale, Setsubun, Lunar New Year, and Valentine’s Day. Festivale will be getting its own entry tomorrow!

One thing that surprised me is I incidentally ended up making a Perfect Snowboy… I randomly had snowballs just spawn so I figured “Why not?” and did my best. Didn’t expect to manage a second perfect one which brings Snow Maestro up to 2/20. Still doubt I’ll finish it though.

The next day, Leo kindly gathered up fruit for me to help me with my Nook Miles fruit selling goal. There was so much fruit. So. Much. Fruit. 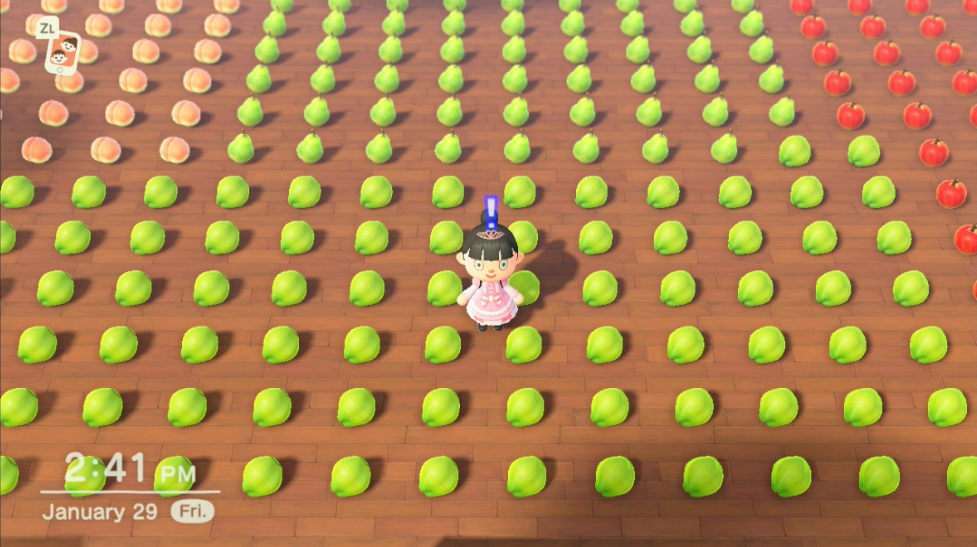 Then Flurry’s birthday was on January 30th.

Considering Peanut is essentially the newest villager we have, I was kind of surprised she was the one celebrating with Flurry as Flurry was like… the third villager I got. I guess they are pretty close to neighbors though.

With February hitting, new seasonal items were available for Valentine’s Day. I ended up placing the chocolate in the Kitchen and redoing Judy’s yard for the Heart Bouquet.

Festivale items also started showing up in Nook’s Cranny along with the new special Festivale Reactions.

I was also surprised to see decorations already out for Resident Services. Especially as there was no announcement yet on the bulletin board. 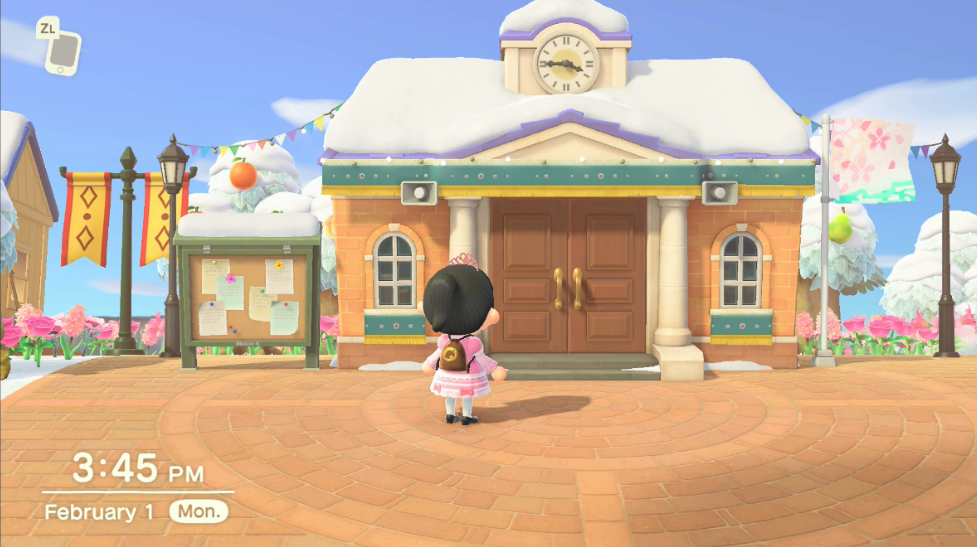 I ended up putting the garland on the beach. I think it looks kind of nice. 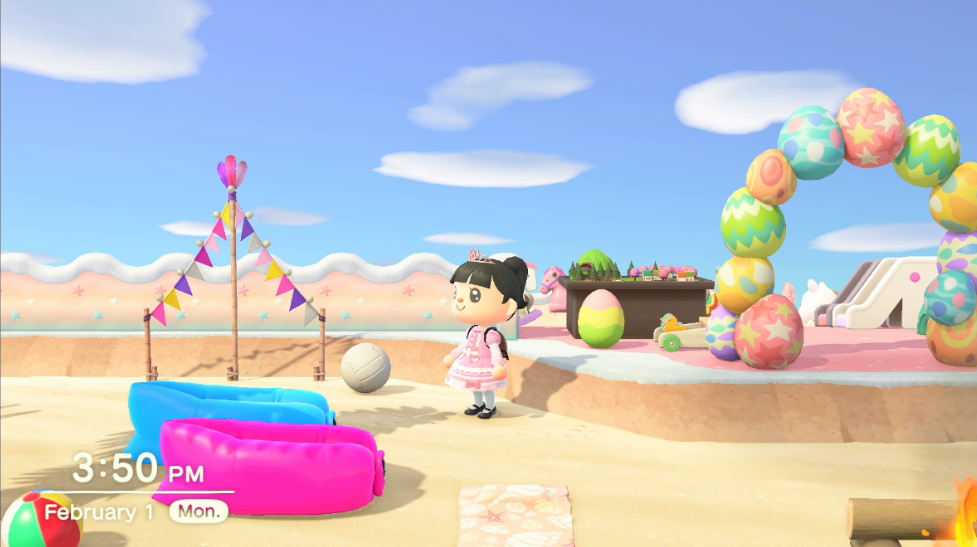 And the reactions are so cute.

As the 2nd and 3rd came around, I was… truly surprised Setsubun didn’t get a mention. I suppose part of me shouldn’t have as we hadn’t really seen any of the Seasonal items get their respective events in any way, shape, or form, not to mention how disappointing the beans are in New Horizons, but just due to how much more of an involved thing it was in New Leaf. While other seasonals got some love, it was mainly just a gift from Isabelle and a special standee and that was it, but Setsubun had unique interactions with the villagers and with them bringing over the masks and outfits as well… It just feels so weird.

If you want to know more about how Setsubun worked and how it and the Beans varied between New Horizons and New Leaf, I’d highly recommend checking out my friend Zed’s video that goes into it (I also show up a bit to help demonstrate some things :P). You can also read the post I wrote over on my New Leaf blog.

I really think this would’ve been the perfect time to let us learn more about the events by experiencing them over just reading as we buy them from a catalog. Or, compromise of still having regional events, but letting people buy the items from the Nook Shopping Catalog even if they can’t do the event themselves (whether in their town or by visiting a friend in the appropriate region).

Meanwhile, I had been doing my best to try and buy up all the Festivale items that show up in the Nooklings’ Shop… For the most part, they’ve mainly ended up being used around the beach. 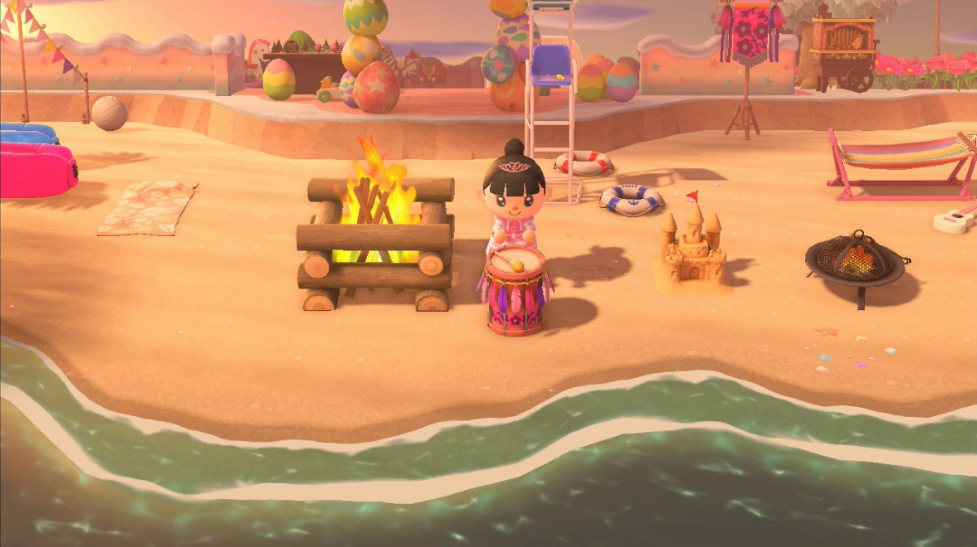 I had originally hoped to use the Balloon Lamp to switch out some of the Balloons in my shopping area but they’re just… way too tall. I’m not even sure it looks good where I put the one for now which is a shame (I might just remove it for now v-v) as I honestly adore the designs, but I’m just not sure if there’s anywhere on my island that they’ll genuinely look good. If anyone has any ideas, let me know?

The Festivale Announcement also finally showed up on the Bulletin Board which I get them usually not putting them up until a week before, but with all the decorations out already plus the furniture and reactions in the Nookling shop, it still made it feel kind of late. 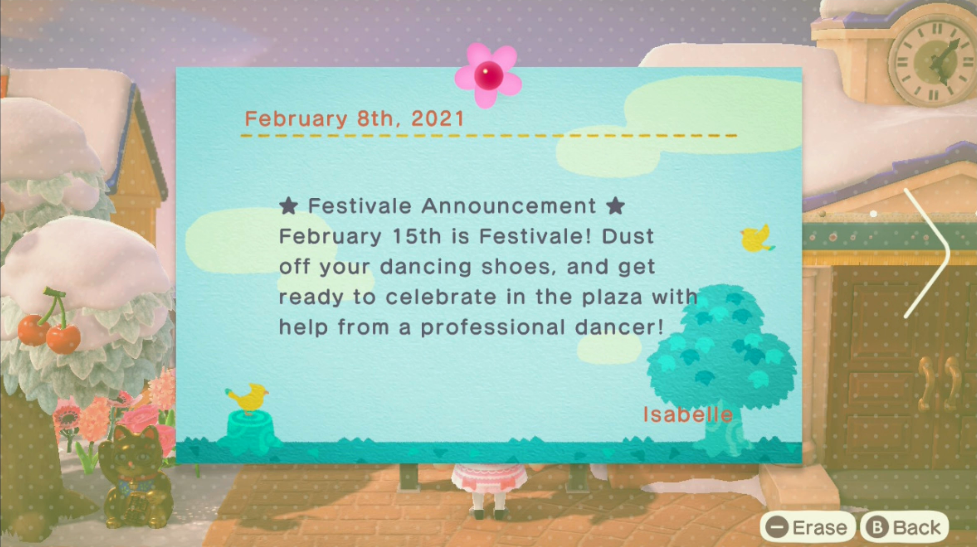 On the 10th, items for Lunar New Year were added. 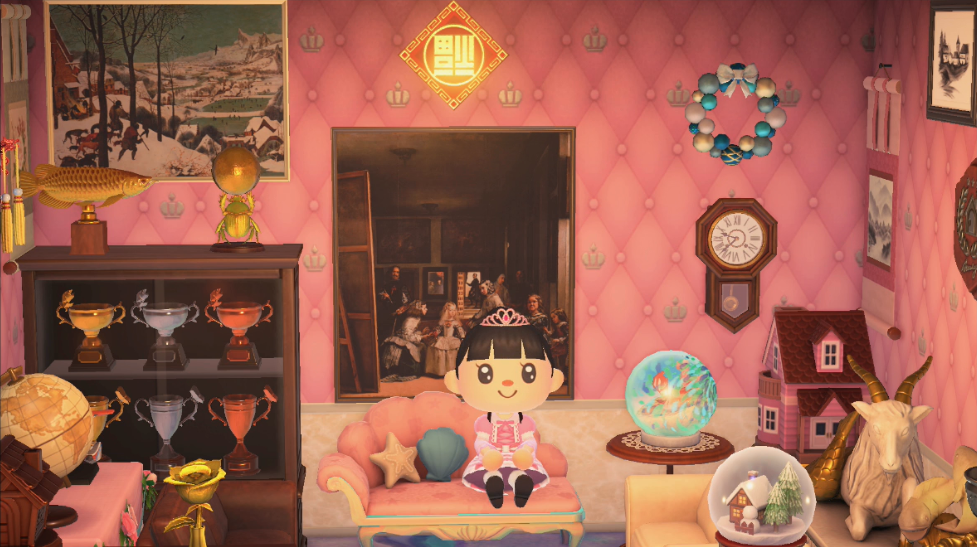 I found it odd that they made them wrappers though? I guess it makes sense, but they look the same when dropped and you can’t store the wrapped money versions… I also find it really weird that the Bokjumeoni wasn’t actually wearable considering.

With the lack of anything for Setsubun, I was so surprised to see Isabelle greet me when I booted the game up on the 12th. And for each of my villagers to say something about it– heck, I didn’t even get a single duplicate dialogue line:

Despite the initial greeting though, none of them commented when I gave them either the Lucky Money or Sebaetdon which felt rather odd. Though, I didn’t have enough for all of them due to not expecting the greetings so honestly, I’d probably have felt worse in this case if they did have more special messages.

Nothing really happened on the 13th, but the weeds are starting to change again. We’ve seen them all now. 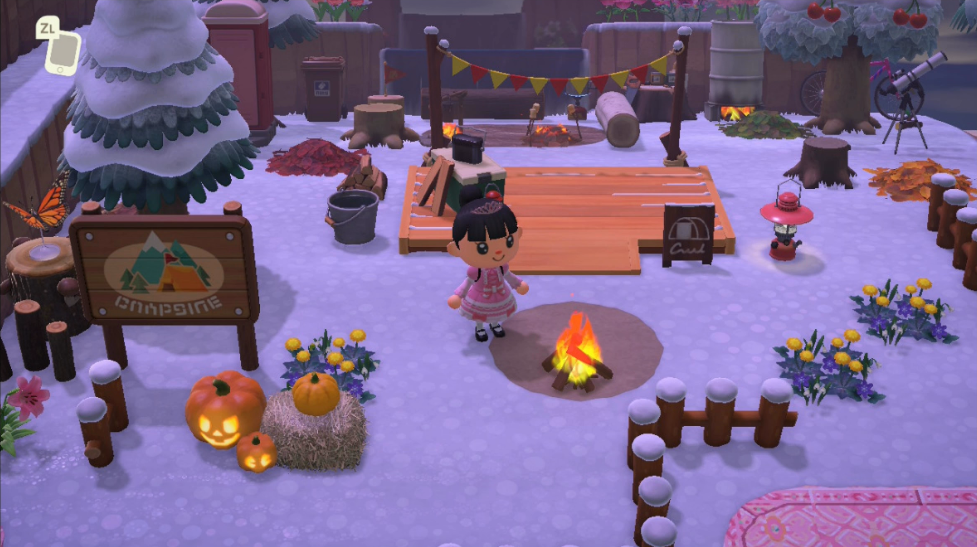 As for the 14th, well… Happy Valentine’s Day! To go with my Animal Crossing valentines from last year that featured all my favorite villagers, I had to make one of Judy as she’s part of that favorite bunch since her official reveal. I think hers may have came out best (maybe because I’ve gotten better after a year, I don’t now), but that may be partially because her color scheme is my entire aesthetic. 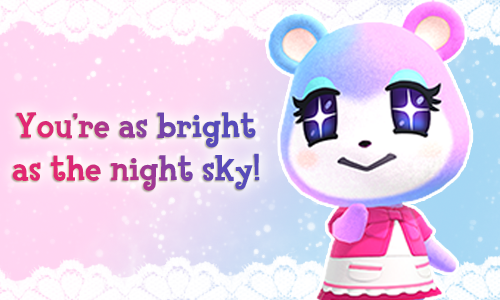 To my surprise after Friday, there was no morning anouncement from Isabelle. But to my even bigger surprise surprise, I had a bunch of mail from my villagers, Isabelle, and friends as well for Valentine’s Day: 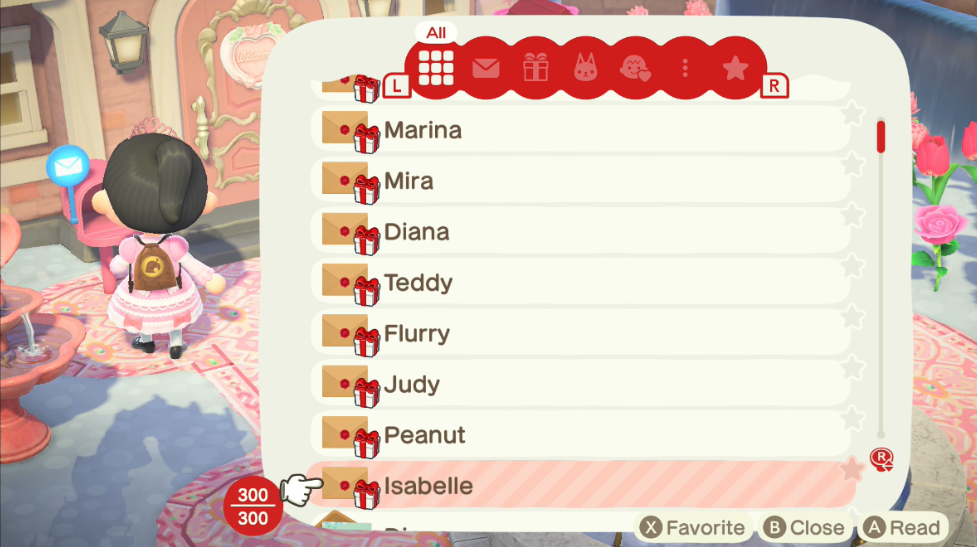 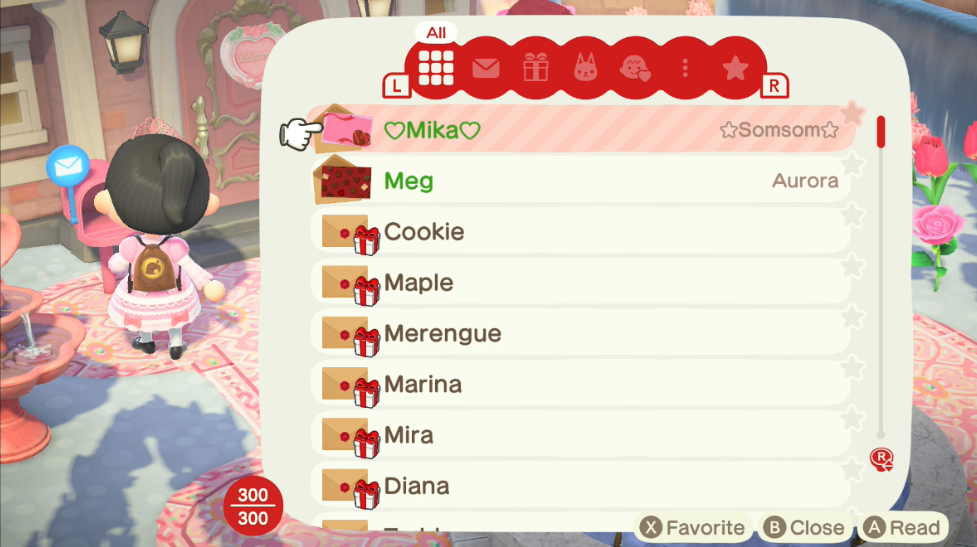 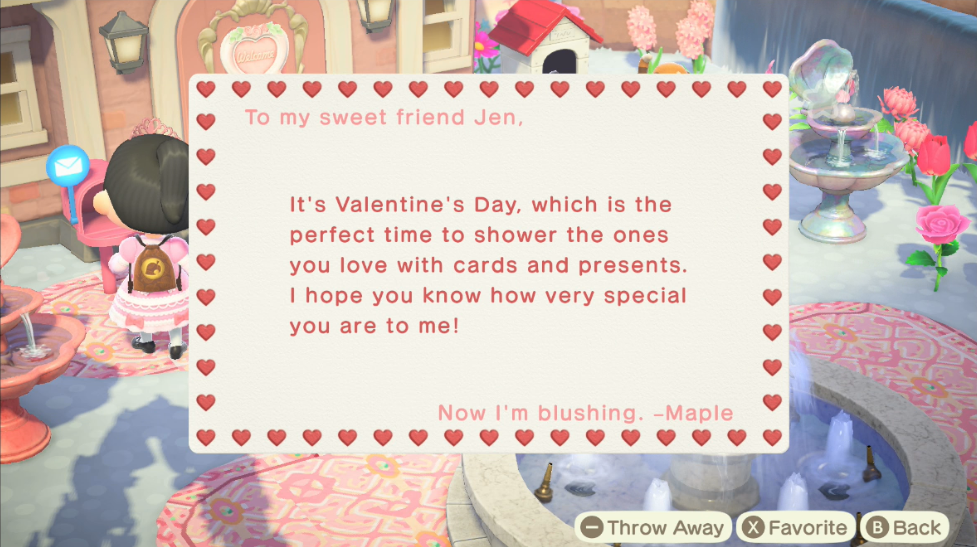 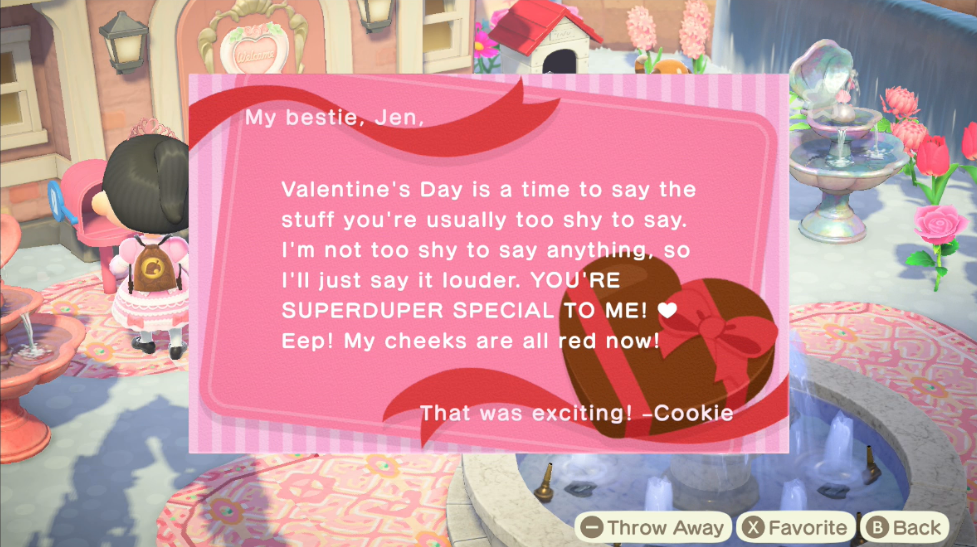 There was no greeting when talking to them (which I guess as they already sent a letter) so I wasn’t expecting much, but they actually did respond to me giving them a Valentine’s Day gift– I would say the only issue is there was so little variety here as it seemed like there was just one message per personality type.

I also finally managed to get the Treasure Hunt minigame after having properly made space for treasure to be buried so I could actually play. 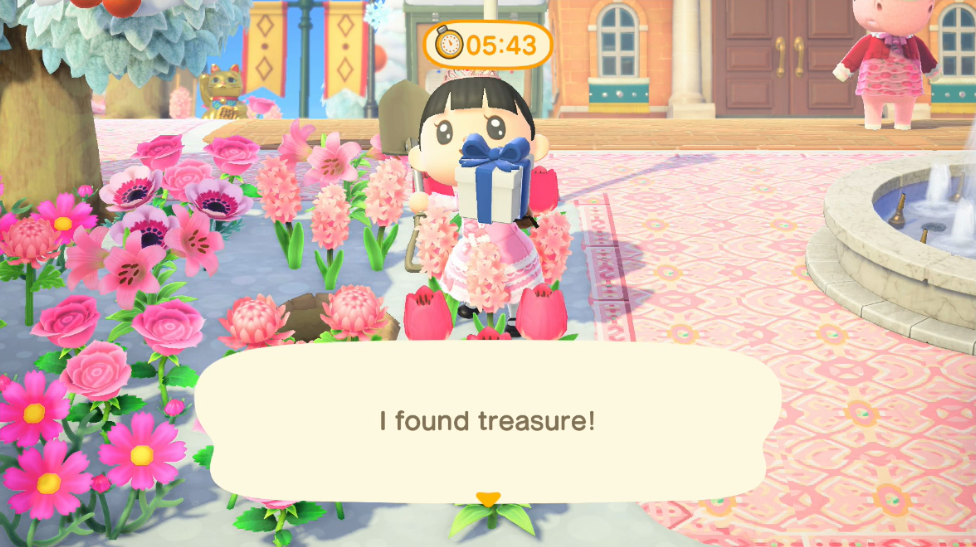 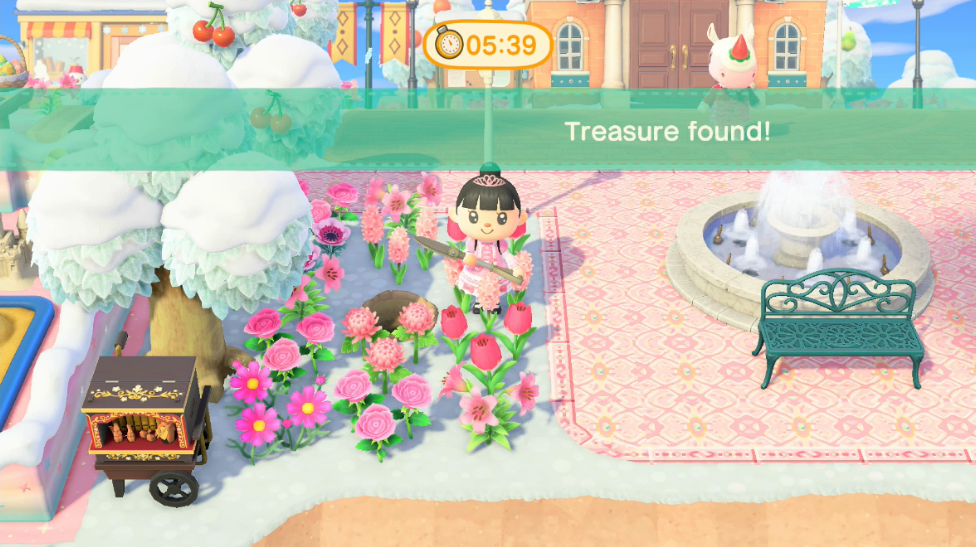 I only got the game once before otherwise when I literally just started and there was just too many places to look to manage to find it. It was nice to finally finish the minigame.

Anyway, with this done, it’s time to prepare for Festivale… 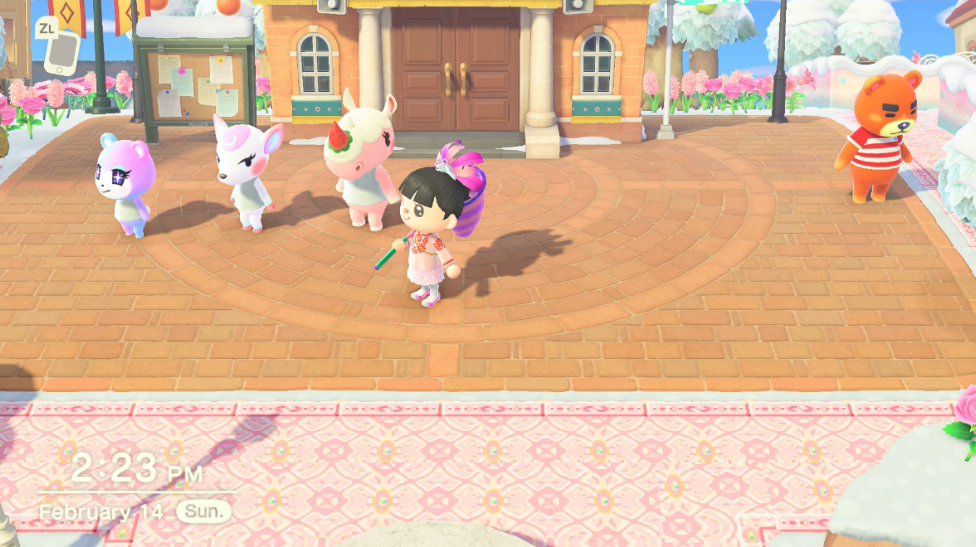