I wrote a post when Disney Dreamlight Valley was first announced about what I hoped would maybe be in the game. Today, a lot of footage dropped including a Gameplay Overview Trailer.

And if I had to state how I’m feeling after all this, well, honestly, my first feeling would be “Overwhelmed”, but after that, I think “Excited” fits the bill. I also feel a lot more optimistic towards the game for reasons I’ll get to further in, even if I do still have some concerns as well (and even one new concern from the recent footage), but for the most part, there’s a lot I’m really excited about.

For one, the character creation is clearly pretty detailed– we had already seen some snips of it in footage, but this is the first we’ve really gotten to see people creating their character with 15 presets and various more in-depth options such as two-tone hair, opacity options for freckles and eyebrows, and various other details. 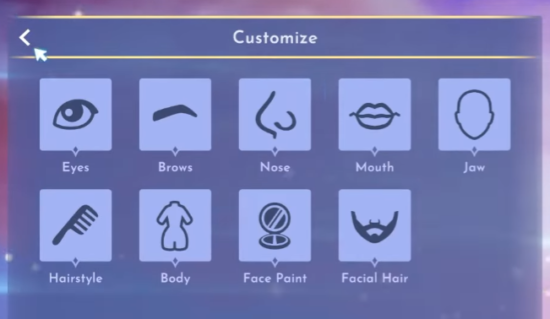 Even Blush Color and Lipstick can be adjusted and everything is unisex so you truly have the freedom to create the character you want. I know one thing I’m personally very excited for is the fact that right off the bat is a long, wavy, ponytail. 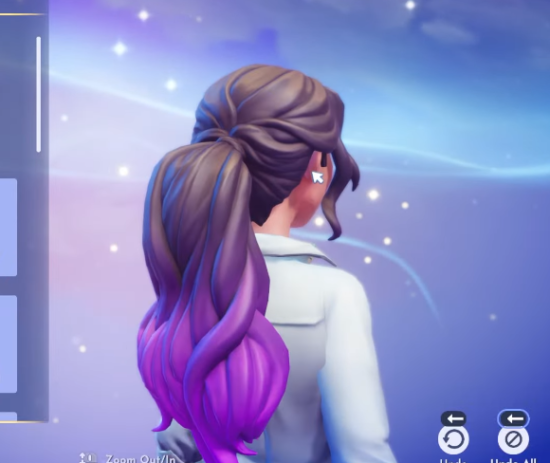 I didn’t see any videos showcase the options from the “body” section, but I’m hoping there will be options for height among other things. This is all considered early beta footage (even more so than whatever Early Access may have) so it’s possible there could even be more in the future. And while it doesn’t look like there will be options for starter outfits (As someone who dislikes jeans, I would’ve liked at least some kind of dress/skirt option instead), I know there’s still tons of customization options actually in the game so hopefully it won’t take TOO long to get an outfit I’m at least okay with. At the very least, you likely will be able to change your appearance whenever as well. 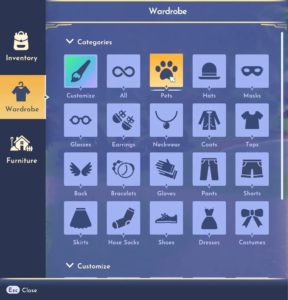 I will absolutely need every single pet. I’m also genuinely really happy to see Hats, Masks, Glasses, Earrings, and Neckwear all having their own categories– while maybe some things won’t be able to overlap, I feel like a lot of games often will allow just one or the other so I’m glad it seems like things will be more flexible here allowing more options. And that doesn’t even take into account the customizing feature that will let you make some of your own designs. It honestly kind of reminds me of Imagine Town and I appreciate how it gives a lot of options for people who may be less artistically-inclined which I feel is a bit of an issue in Animal Crossing. The fact that it seems like even backpacks can be customized really gives me hopes that it may even be possible for everything. This entire outfit was also customized using their customization tool: 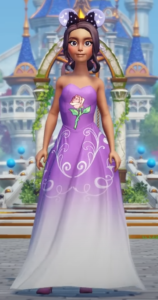 If you prefer more interior and exterior design options, of course, there is tons to that as well with a drag and drop system for both furniture inside and outside your house. You can also move any buildings outside wherever you would like whenever you want. 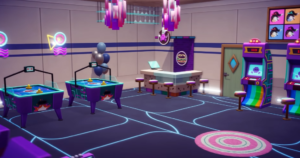 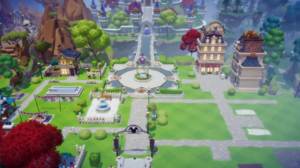 And like with character customization, there’s tons of different furniture types as well. I know I’m especially really excited to mix and match in all facets of the game. I haven’t quite decided where I want to put my character’s house, but I hope to put all my favorite characters near it while putting other characters in areas that I feel fit the theming. Characters move in by paying Scrooge to build a house for them– most buildings you end up making will be done with Scrooge’s help with him taking on a Tom Nook-esque role in the game. I also hope we’ll be able to customize the exterior of our house in some way… I really want a cute pink house. 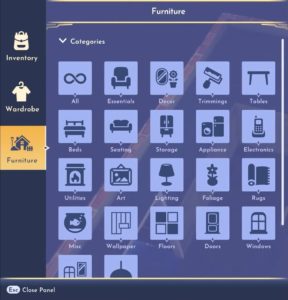 Going back to the game features themselves, one thing that is my biggest surprise is that the farming system actually sounds fun for me. While I’m sure a lot of people may find it less satisfying, the more simplistic approach actually has me excited for it in a way that maybe won’t feel as much like a constant chore. For one, the watering can is always completely full. No constantly having to head back to refill your watering can. Plants also grow within minutes and while you start off with just only harvesting one, as you level up you’ll be able to harvest more items per plant. 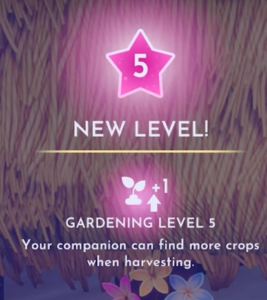 Just the entire idea of being able to water once and being done is such a huge game changer to me for how overly monotonous I tend to find farming in most games, usually being the area I excel the least in trying to progress pretty much any other way. While there was confirmation of crafting furniture and cooking, the more relaxing farming and having a very lovely ponytail has already more than made it worth dealing with, especially feeling like things will be less stressful. As far as I can tell, there’s no inventory limits for materials (in the sense of each caps at some amount) and it seems like even just doing more chore-esque things, such as removing the night thorns, isn’t without its own rewards and surprises. Besides getting money and leveling progress, it seems you can even find recipes as you clear them out which adds a fun surprise element over just getting rid of them because they’re there.

Fishing also seems to have its own kind of spin on a timing mechanic with you timing the ripples to a circle around over just pulling at a sound or doing some… weird back and forth mechanic. While I have seen this mechanic before in games, it is the first time I’ve seen it applied to fishing.

Besides what seems to be the norm at this point in a lot of life sim games, each character in the game will have friendship levels that let you unlock exclusive items (and possibly also quests?) that cap out at 10. I’m especially eyeing that fountain that is a gift for hitting maximum friendship with Mickey. I loved it since we saw it in some of the first footage from the game so it’s no surprise that I’m considering it a priority. 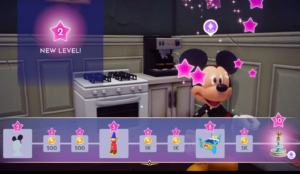 It does seem just doing quests can help raise their friendship beyond just giving gifts, but I genuinely appreciate that it lets you know what items they really like that day over having to keep track and possibly even guess early on what may make them happy. 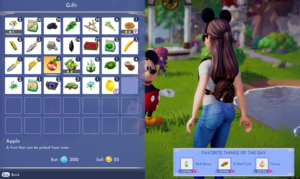 I’m also happy to say that for the most part, a lot of my concerns with the Free-to-Play aspect felt alleviated watching all the upcoming gameplay. For one, the stamina system seems very forgiving and easy to work with– it goes down as you expect when doing things in the valley such as cleaning up the night thorns, but you can easily replenish it by eating food whether it’s just stuff you harvested from your own garden or around town or from cooking recipes in your own home or with Remy once you unlock his restaurant. It seems that Recipes can both be found in the world as well as just learned from experimentation which is neat too. Your stamina bar will also increase as you level up.

Between crops growing in minutes and the fact that you can play whenever you want, the game feels much more freeing. No worries about it being too late to check the store or being forced to go to bed in-game. You can take your time and just enjoy the game as is. Monetization seems to be solely confined to some vanity items in the shop and expansion passes and seeing the items in Scrooge’s store, clearly they won’t be nerfing any of the items available in-game just for the ones that can be bought for real money.

I also genuinely love the game’s interface from what we’ve seen so far. It looks really great and organized. 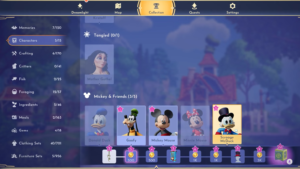 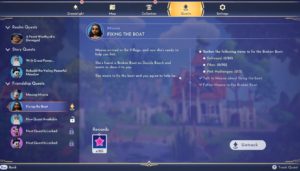 I would say my only concern is the rumored “Star Path”– a season pass type of mechanic that was only mentioned offhand in one article and alluded to as a possibility in another video. I honestly can’t stand Season Passes due to rarely having the time (or energy) to put into them and they almost always feel rather costly in the long run, on top of requiring a significant grind. There are some ways I could think it could maybe work (IE: Completing some dailies/weeklies each day levels it and it lasts a full season to give everyone time to do it considering this is supposed to be a relaxing game), but for the most part, I’d really rather it not become an extensive grind no matter how generous the game’s stamina system appears.

We also still don’t know how much the Founder Packs costs will be– considering the brief hinting when I mentioned Gamescom in the Discord though, I’m wondering if we’ll hear pricing then with preorders possibly going up, if not sooner. I just hope they won’t be too expensive and that there won’t actually be tons of exclusives.

Finally, I wanted to talk briefly about the story shown in one of the gameplay videos, so if you want to stay completely spoiler-free, I’d recommend stopping here.

We learn our character has left the city to go back to, what appears to be, their Childhood home which looks very much like the Yellow House we start with in the game. I’m worried our house in-game may even stay this same yellow house (even if it does expand inside) because of that, but I’m really hoping we’ll be able to do something with it considering how extensive all the other customization seems to be.
The game seems to take place in a dream-esque version of the yard where it seems the player character made up their own stories with Disney characters and that the area has slowly overgrown with thorns. When they fall asleep in the yard, they wake up in the “Disney World” and I’m guessing the Player is actually the “missing Ruler”. Whether it’s an isekai situation, all a Dream, or the player just living out their imagination as they clean up and renovate the area in the real world, I’m really curious where the story will go and if it’ll truly have an actual “end” or not. Though, I suppose even if it is, I would assume we can still revisit our friends back in the kingdom whenever we want.