So, as I said yesterday, my goals for today were:
-Getting everyone to level 10
-Catching a Fugu
-Figuring out all the recipes.

For the most part, we got really close! We just… ran into a small number of caveats. I did succeed in getting everyone to level 10! And even finished all their quests! The problem is I’m still waiting to finish the step I’m on of Mother Gothel’s quest and apparently it takes 24 hours for the Crystal/Shard/Fragment to… feel like coming out of the ground so uh, tomorrow we should finally have it done and then, all quests will be complete!

I DID catch a Fugu! It seems they may only be able to be caught in the rain (in gold bubbles) which is… frustrating to say the least.

As for Recipes, I only have four left to figure out: Mushu’s Congee, Pan-Fried Angler Fish, Steamed Fugu, and Walleye en Papillote. Hoping I manage to soon T~T

But now, onto the tasks of the day! I decided to start on Elsa’s yet as she was pretty close and I was really curious what the door would open (I also took Eric along to help level him up as we went). That said, I ended up being a bit disappointed as it only really made the ice melt for a chest and there was no secret door opening or anything. It felt kind of anticlimactic– we did get some lore though! Elsa is the one who made the Frosted Heights… well, Frosted. 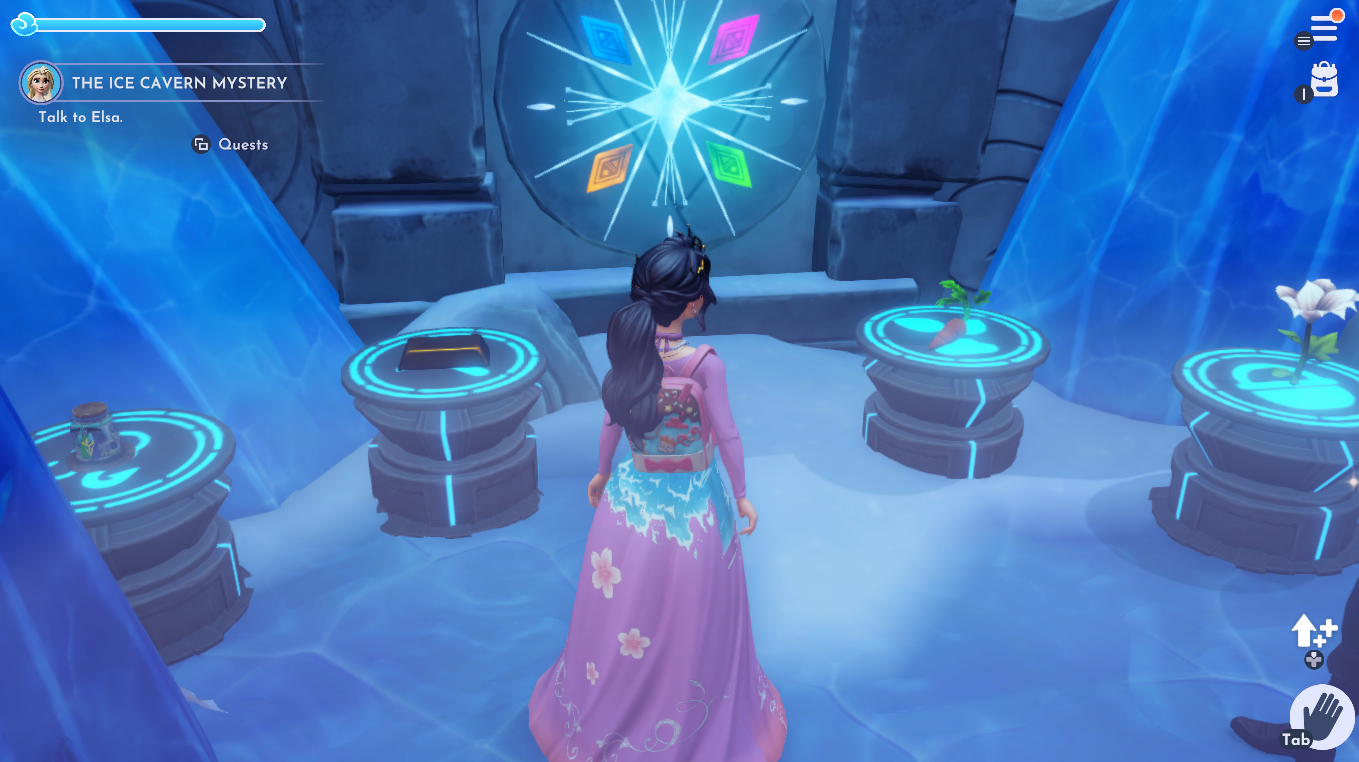 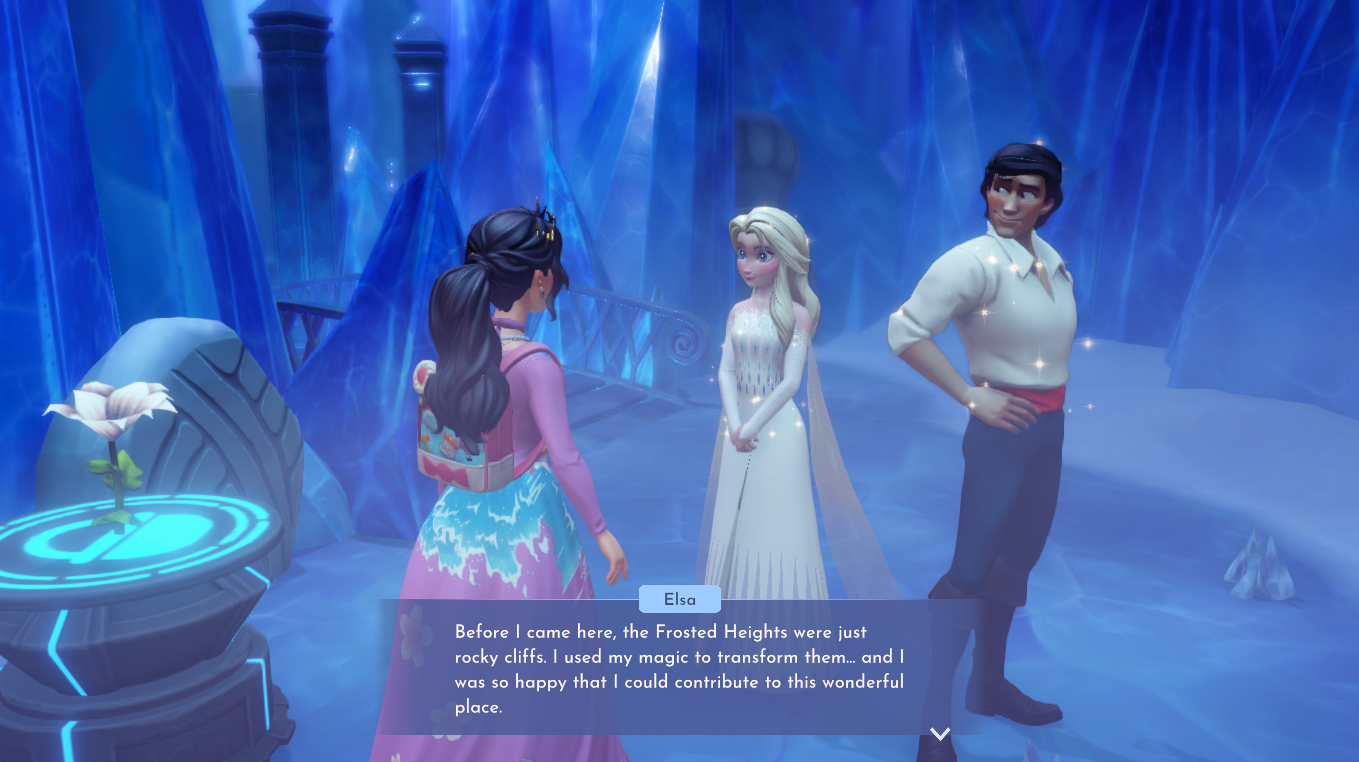 While working on leveling Eric up through some extreme mining, I realized there was actually a path down from the Forgotten Lands to the backside of the Sunlit Plateau for Ursula’s quest, so I didn’t need to move the well at all. 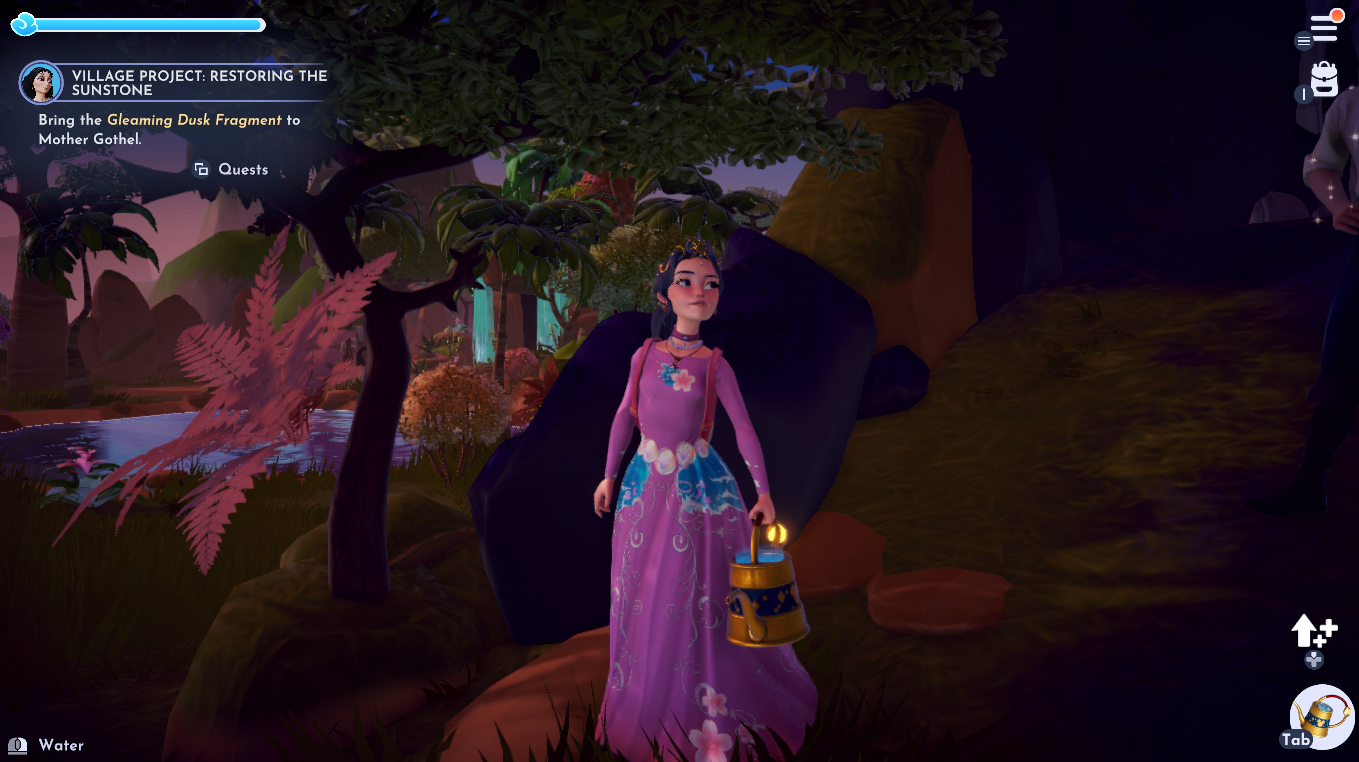 Eric’s quest was neat, but I was thinking we’d get to explore the Skull Cave due to some hints of him interacting with it over him just… going diving offscreen. I do like the ship model we get as a gift though. 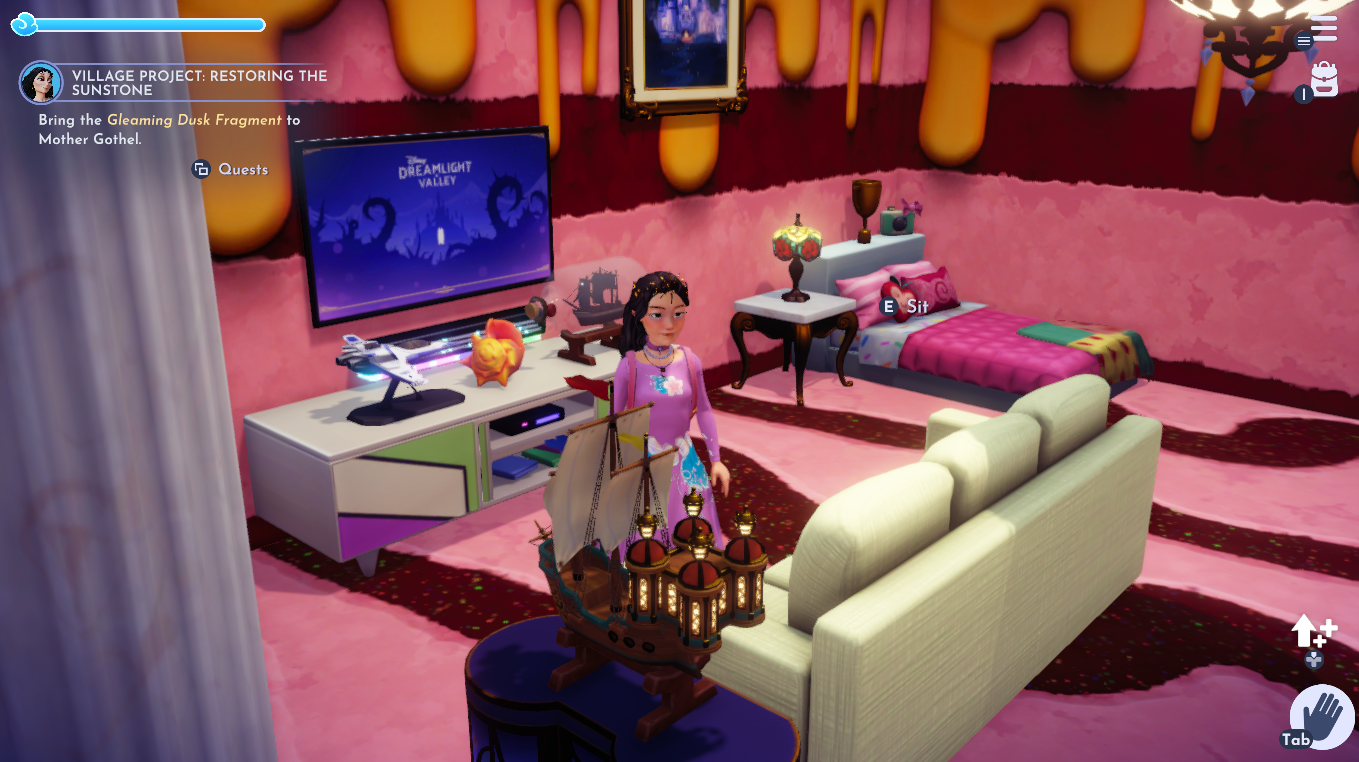 I wish he’d stock blueprints more, however. It feels like he only stocks one a day thus far, which seems odd as he clearly has slots for more and it seemed the upgrading just came from finishing his friendship questline.

I decided to work on Ariel’s next, while having Anna tag along, if only because since Ariel can’t hang out, I just need to spam her with gifts and Ariel’s has been fun with each of her quests kind of affecting her house’s interior and I didn’t see much coming from Anna’s. We essentially got more lore, but also some hints to possibly Atlantis maybe appearing/being part of where we initially found Ariel. I’m really excited how this could tie into future content. I want some of the items she collected for my own house, honestly.

I did kind of hope to find more puzzles over just a crystal, but it was still neat if only for lore reasons. That said, I have no idea why we went to Ursula for the Anger emotion over Donald??

Anna’s quest was just about cheering up Elsa and giving her some gifts. My favorite part was making the Snow Family and it’s probably the only commemorative photo I haven’t ruined…. but I’m really sad because for some reason the Snow Family disappeared after :( I know you can make them all individually, but I really liked the group of four. 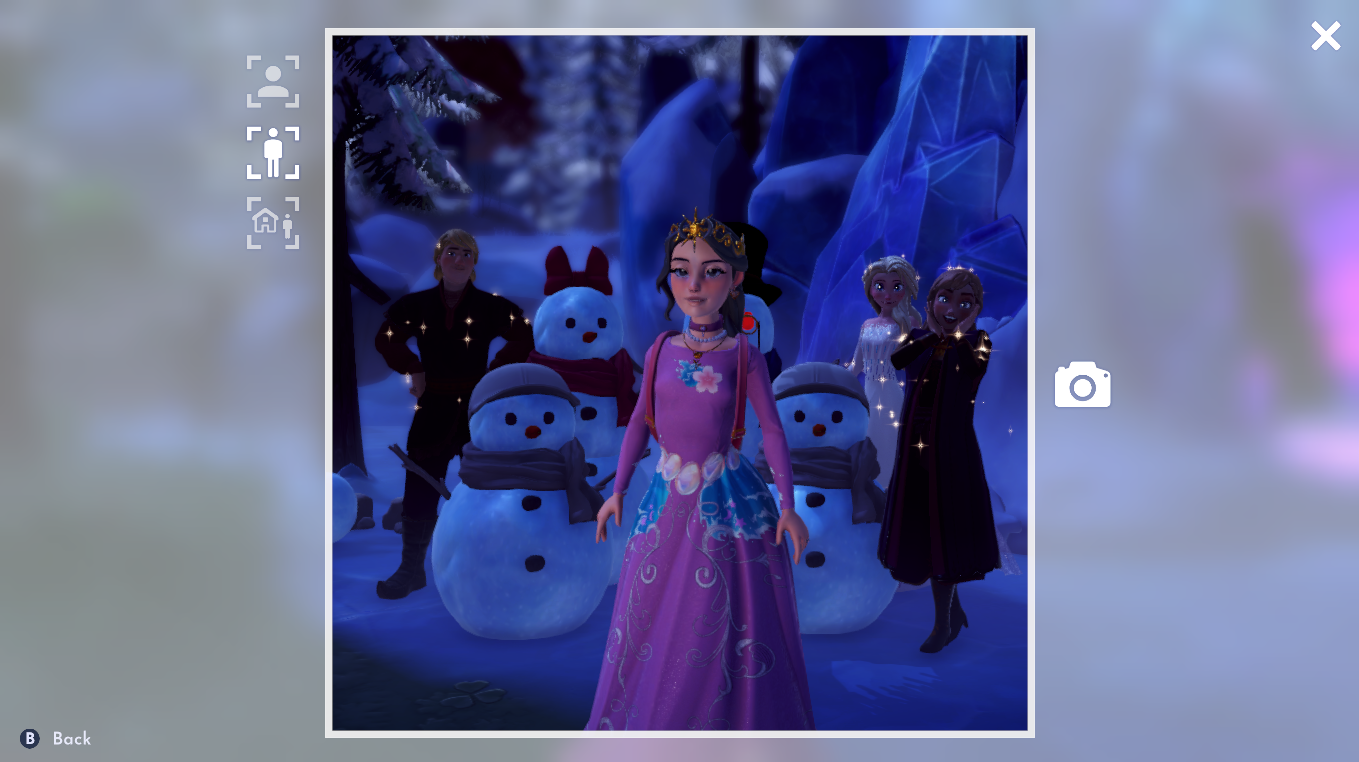 With all the quests done, I did a little more crafting and decorating by making a Zen Garden and placing the Couch I got from Ariel in my character’s room for now.

That said, there is still one mystery left… What is with the book I found in the secret room at the end of Mickey’s quest? Maybe it’ll be used with Mother Gothel’s? Or is it something for the future? 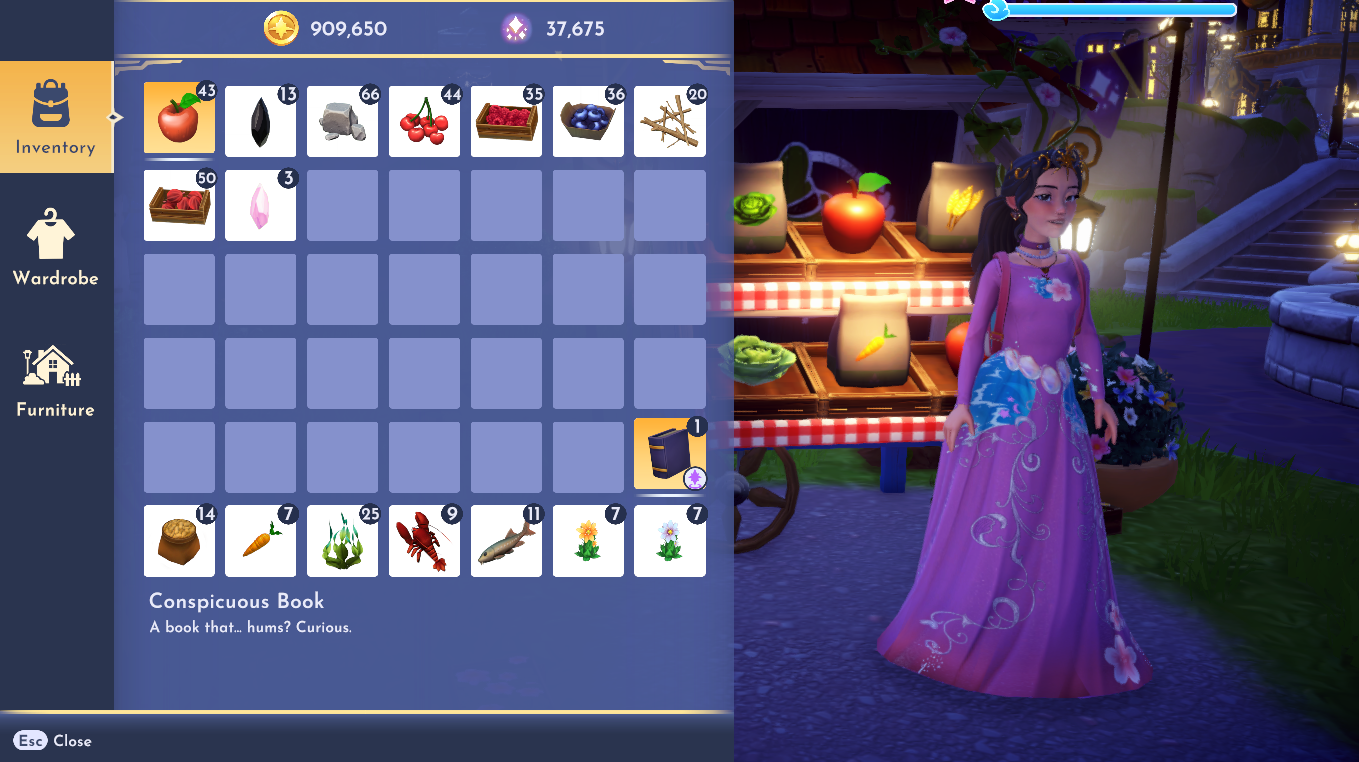