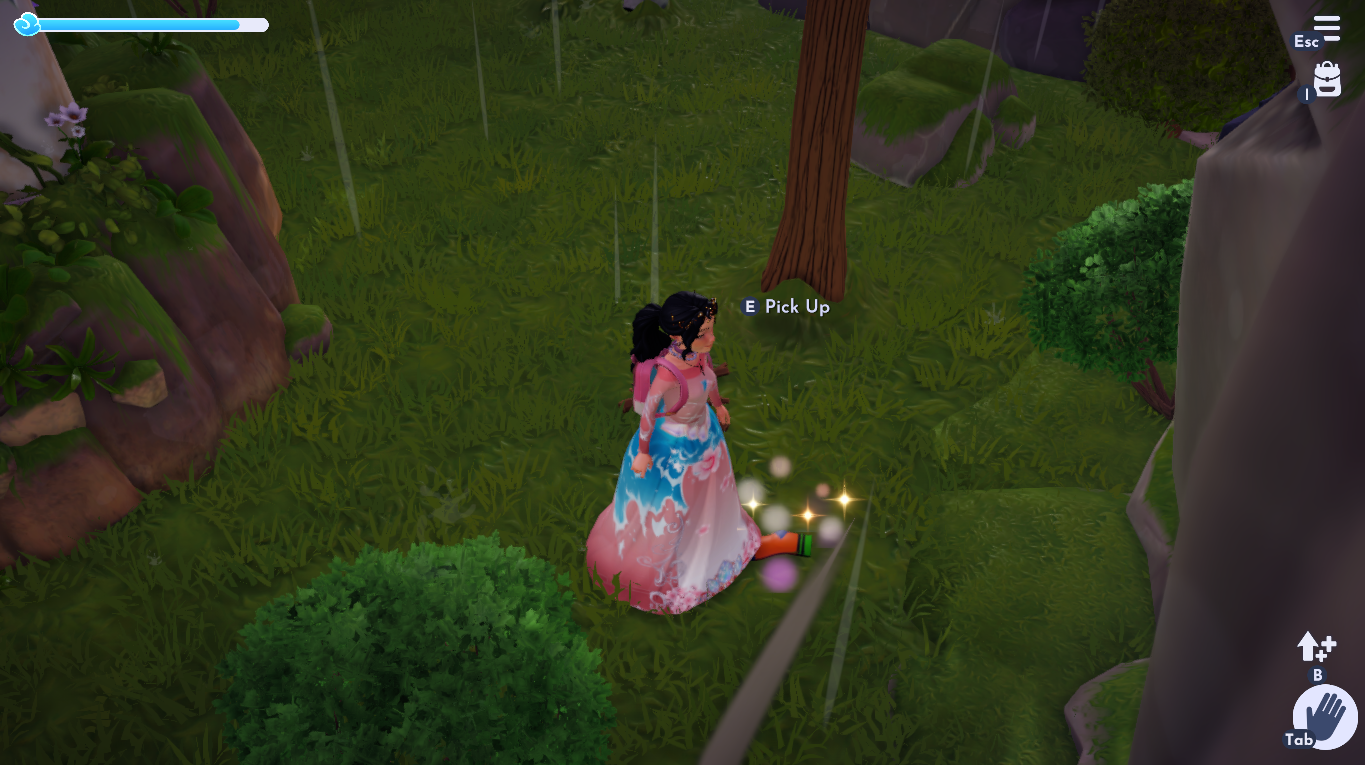 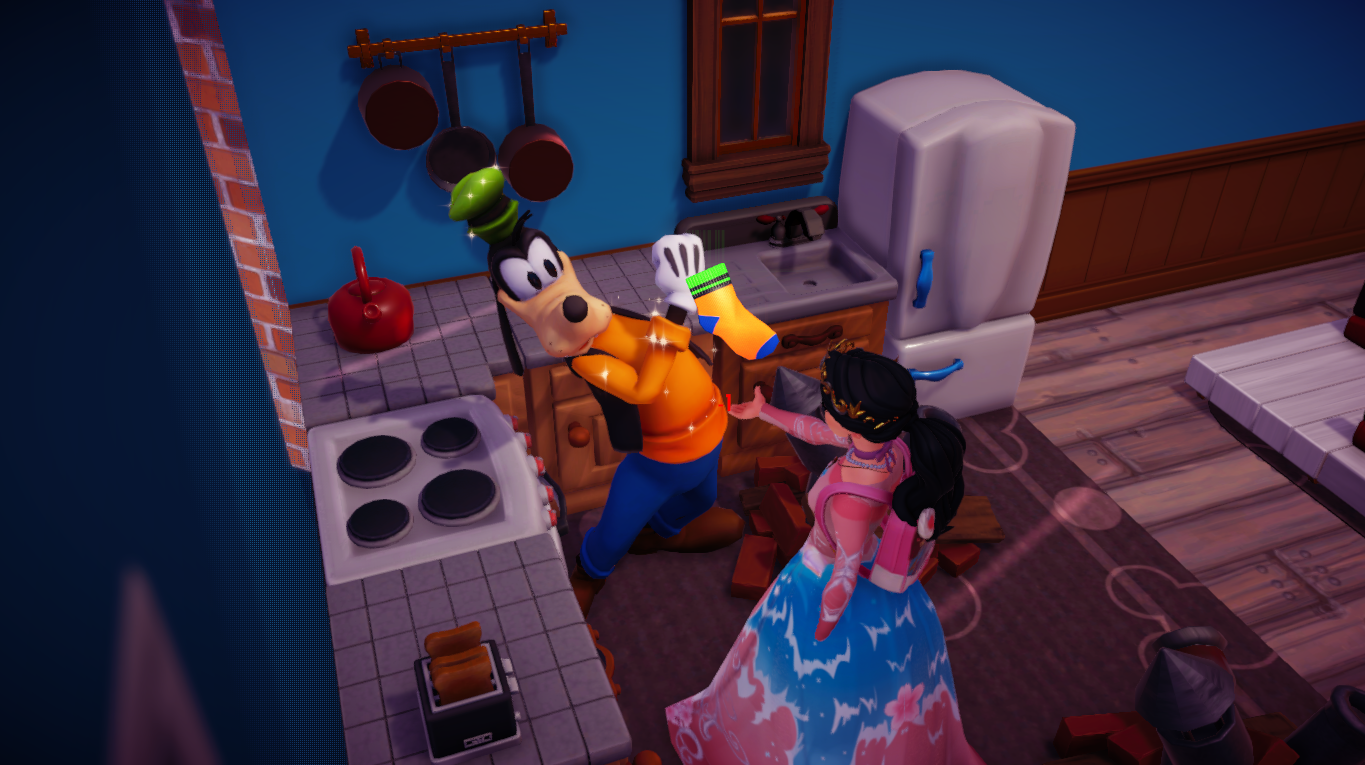 After helping clear out Goofy’s house, a new clue was found: Some blue fur! So, I brought it over to Donald to scan into the device and despite his protests, there absolutely is a Blue Raccoon. 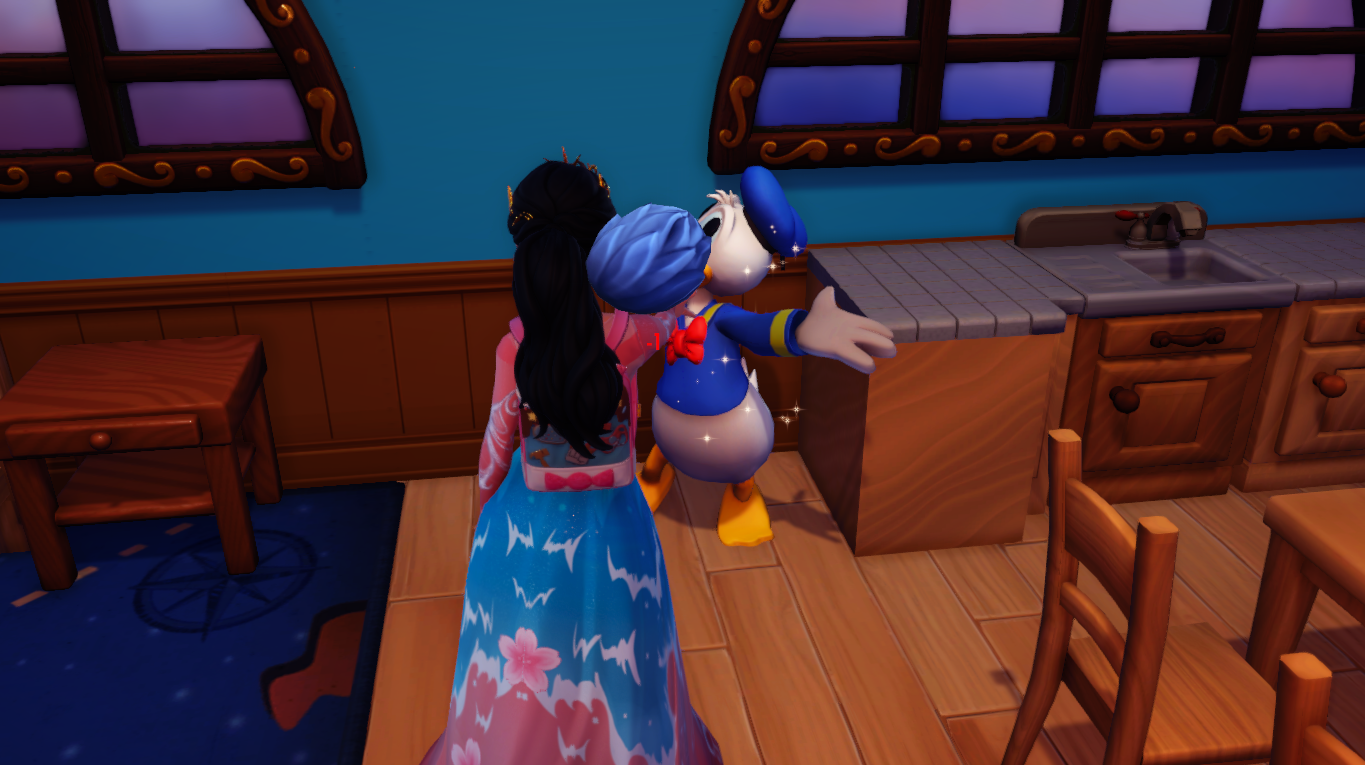 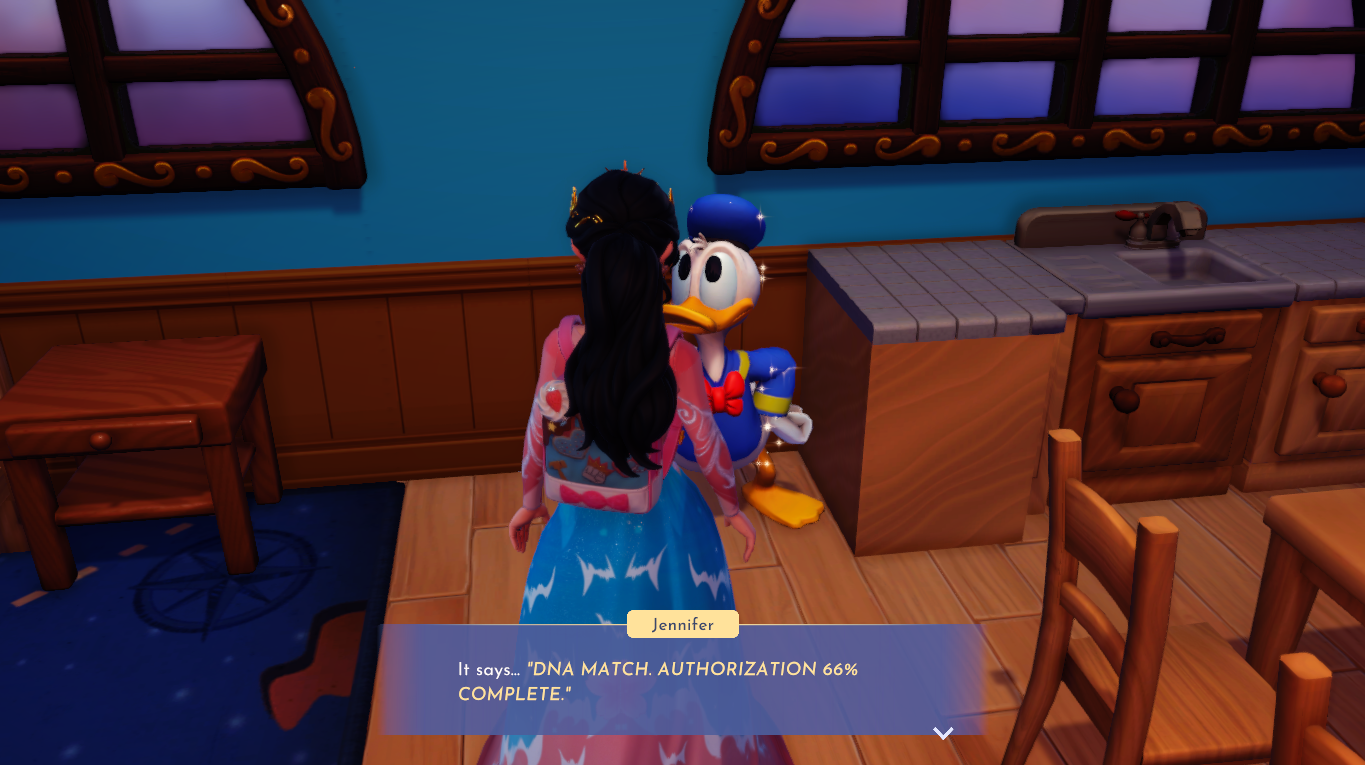 Considering the matching 33% up (making it now 66%), I figured it’d be another five days until the next part and well, as you can tell from the date of this post, I was right!

Today (Friday, the 16th), I found another sock. This time, in the Forest of Valor. You can also find my playthrough of everything I mention here over on Youtube! 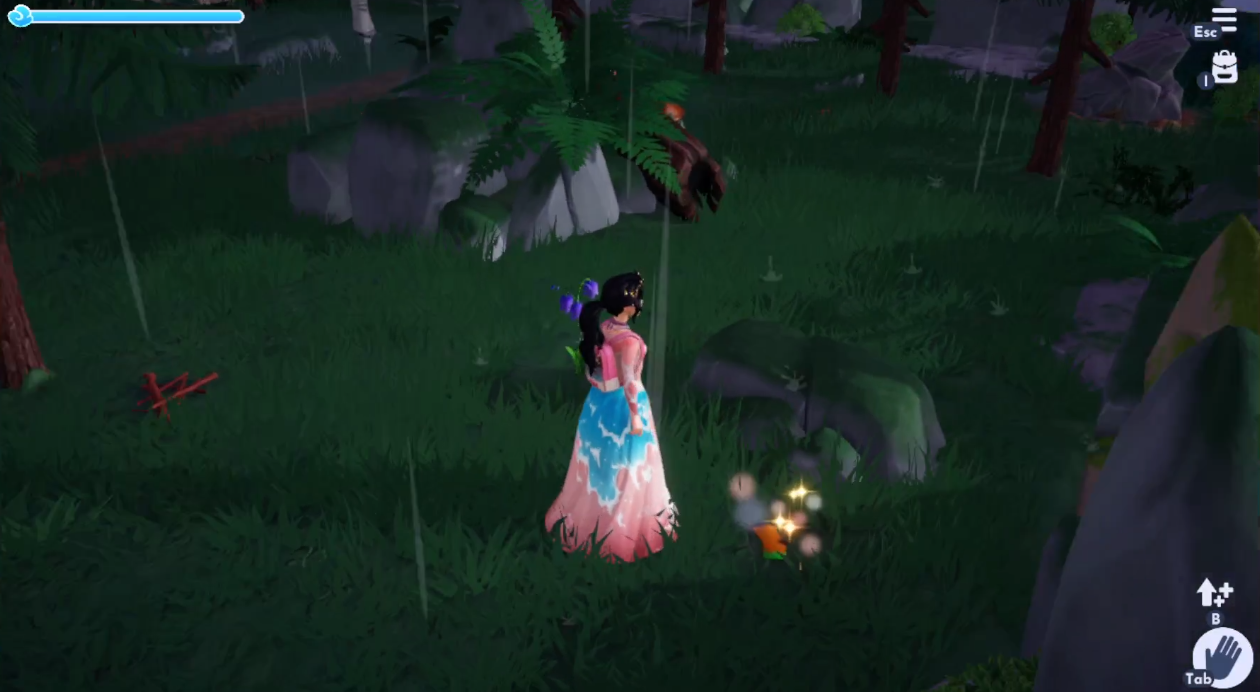 Unlike the last two times where we were told pretty quickly whose sock it was, this time had to ask around. I decided to go in order and started with Kristoff. Despite him making it pretty clear it belonged to Merlin, I headed to Mickey next which gave some interesting dialogue… He mentioned how the socks were made by someone. 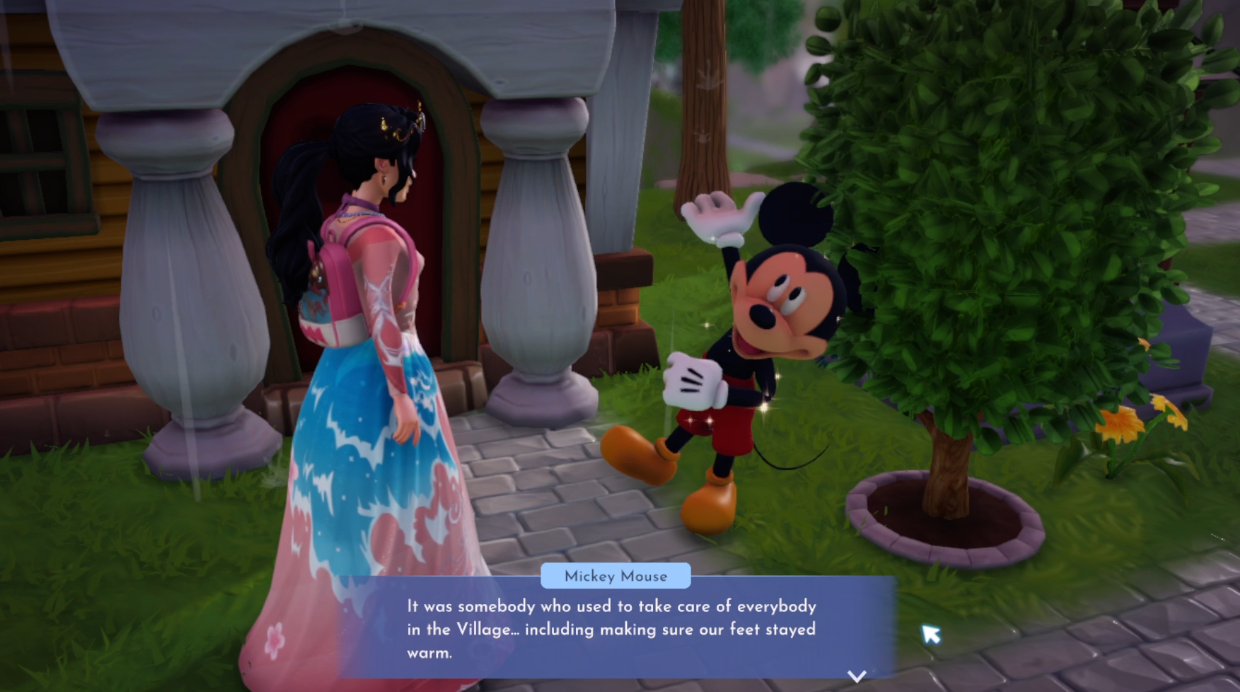 Initially, I thought he meant us as I don’t think Mickey fully remembers we’re the Ruler yet… Especially when he says “she” next, but I recalled the game didn’t ask us for pronouns, so he was likely talking about someone else and a few female Disney characters quickly jumped to mind.

Making my way to Merlin next, the sock was indeed his and he dropped more information on us. 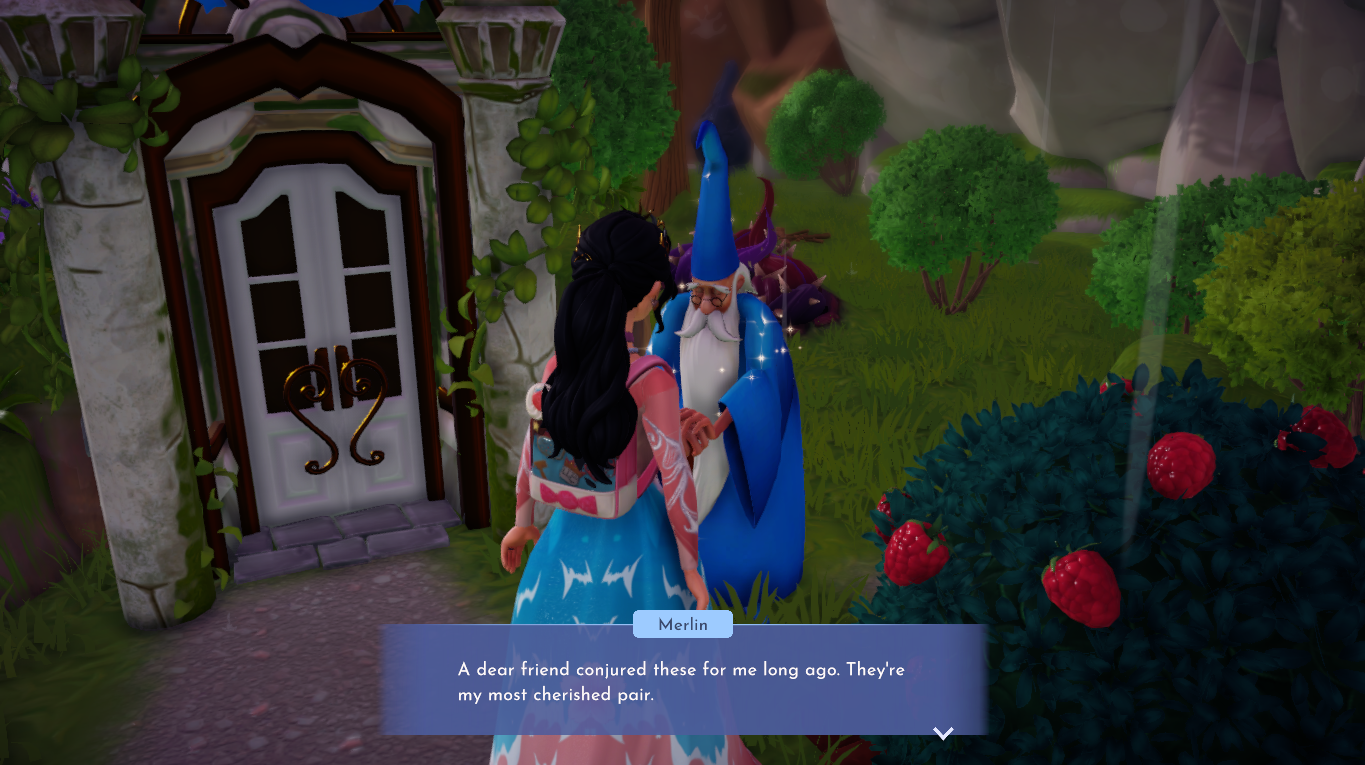 What I find interesting is his use of conjured which makes me think it has to be a magical character… A Magical character who would make socks… Fairy Godmother was the first to come to mind, but I suppose some others may fit the bill too.

After clearing out the mess in Merlin’s house, we had our final piece of evidence which also got the Beacon to 100%. 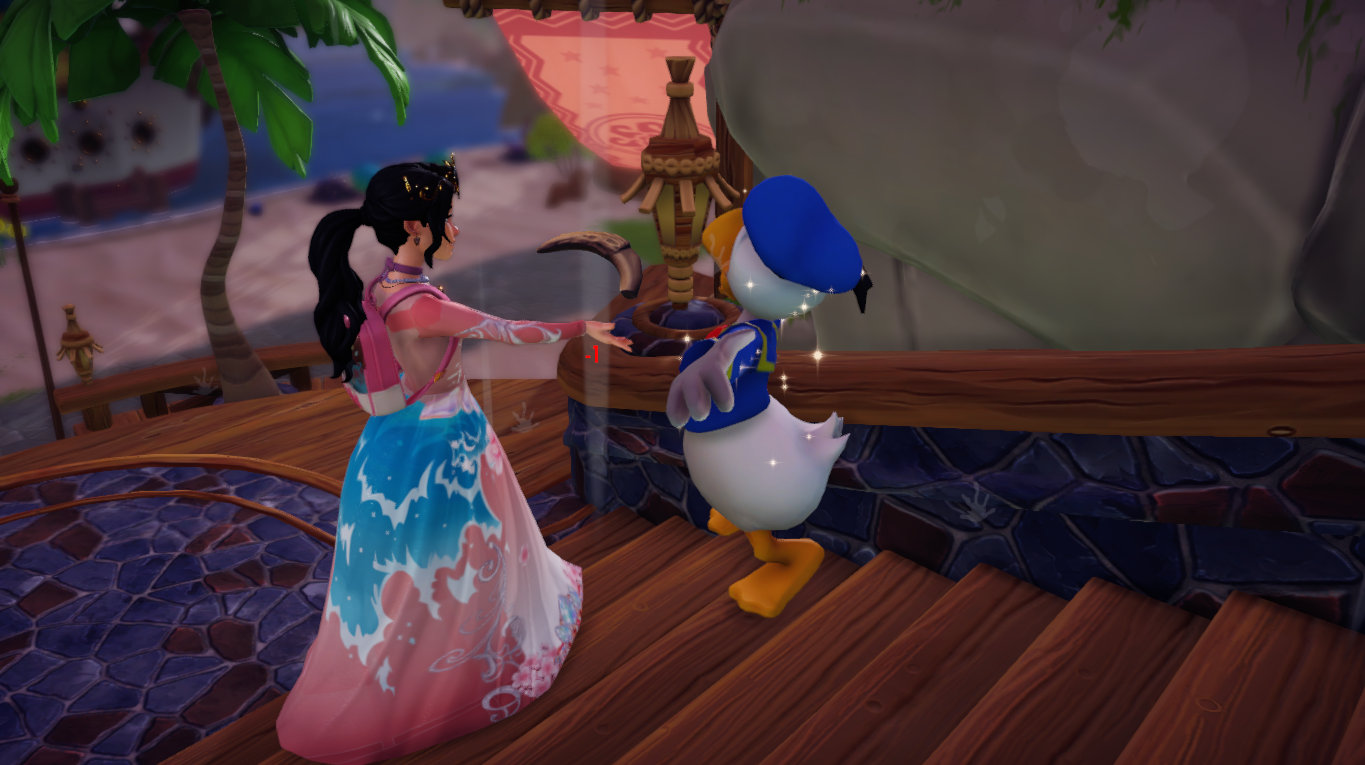 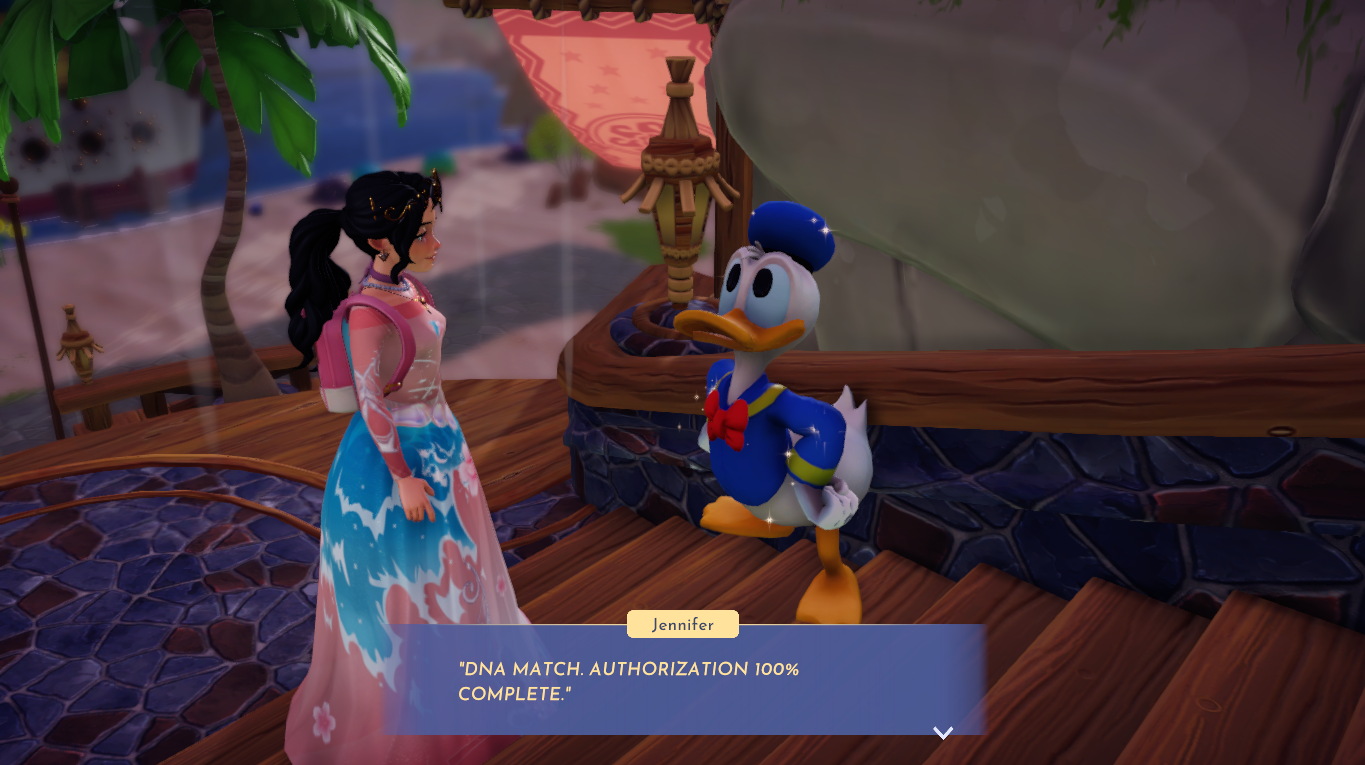 Placing it caused Stitch to crash his ship right on the beach… But at least he was okay. I do hope Lilo won’t be too far behind though… I always feel a little sad when they’re not together. 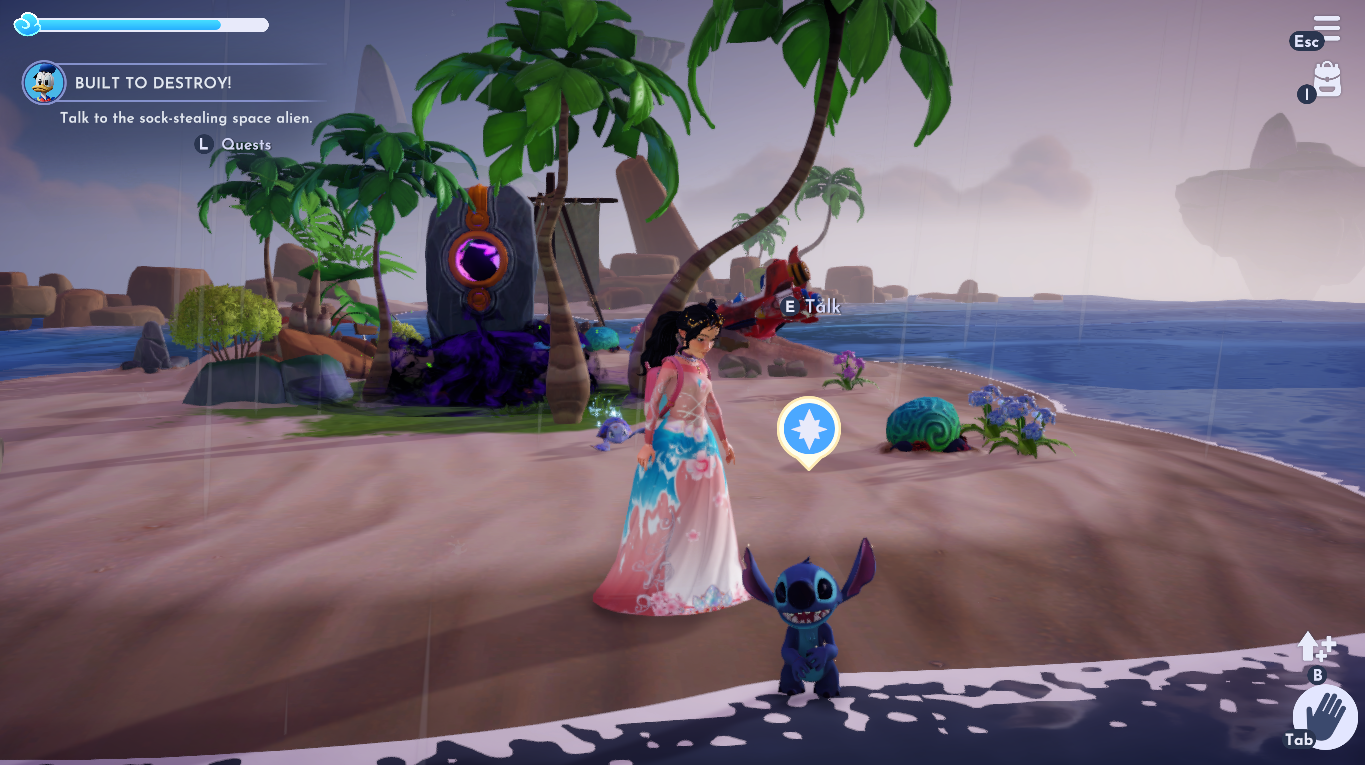 Stitch is another character who essentially managed to escape the Forgetting and mostly seems to remember his memories. To make up for his ship crashing, we made him a very nice new house. 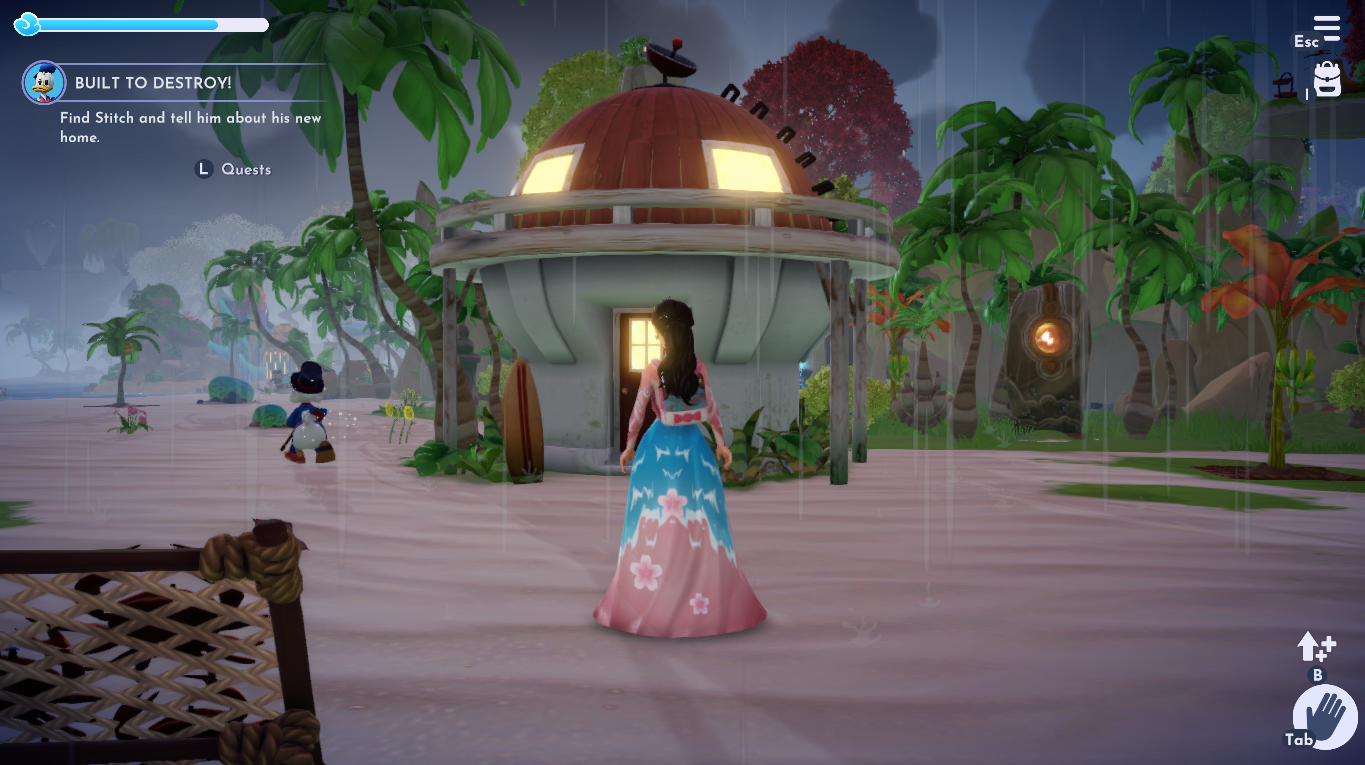 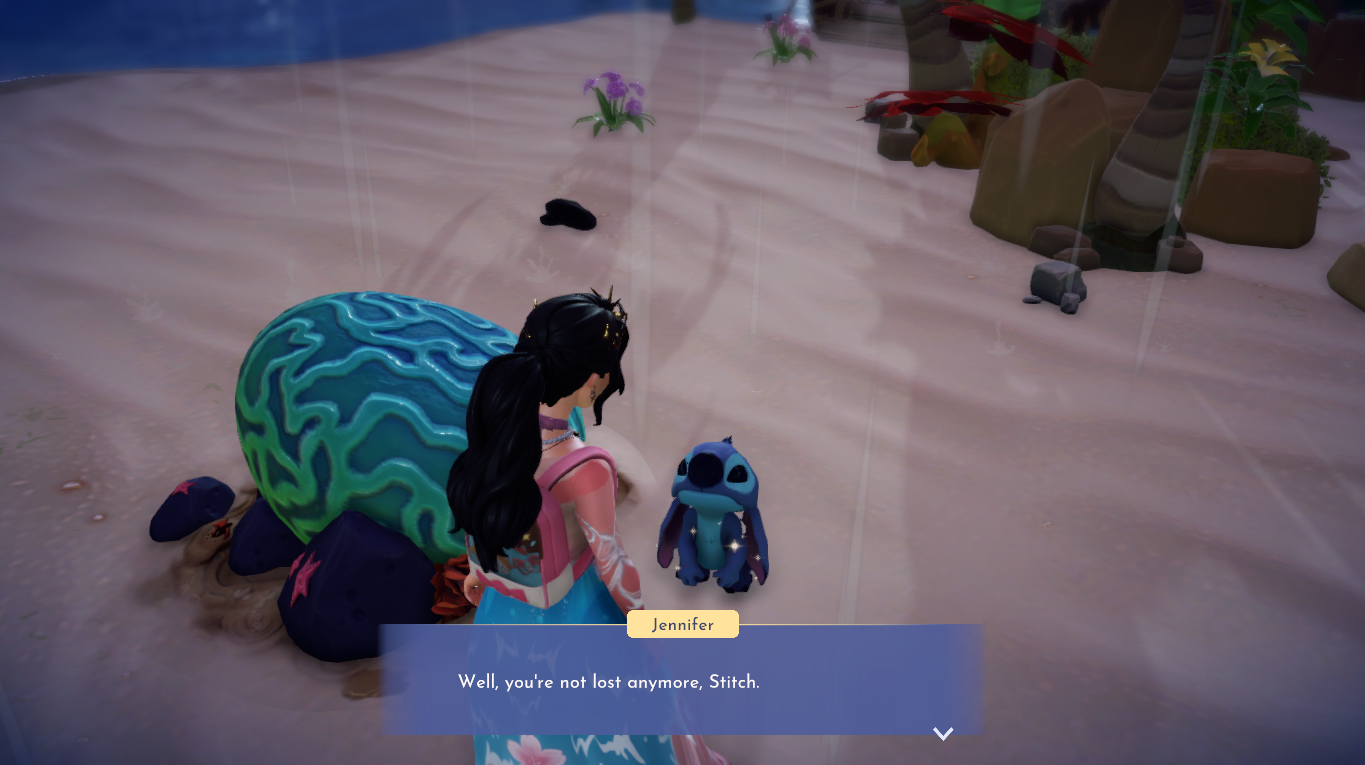 It was then onto Friendship leveling! After giving favorite items, I kept giving him flowers until level 10. If you’re wondering why I didn’t do the questlines in-between like I usually do though, it’s because Stitch’s had a hidden requirement right off the bat. Thankfully, it didn’t take me too long to find it after seeing this sign of Donald all messed up: 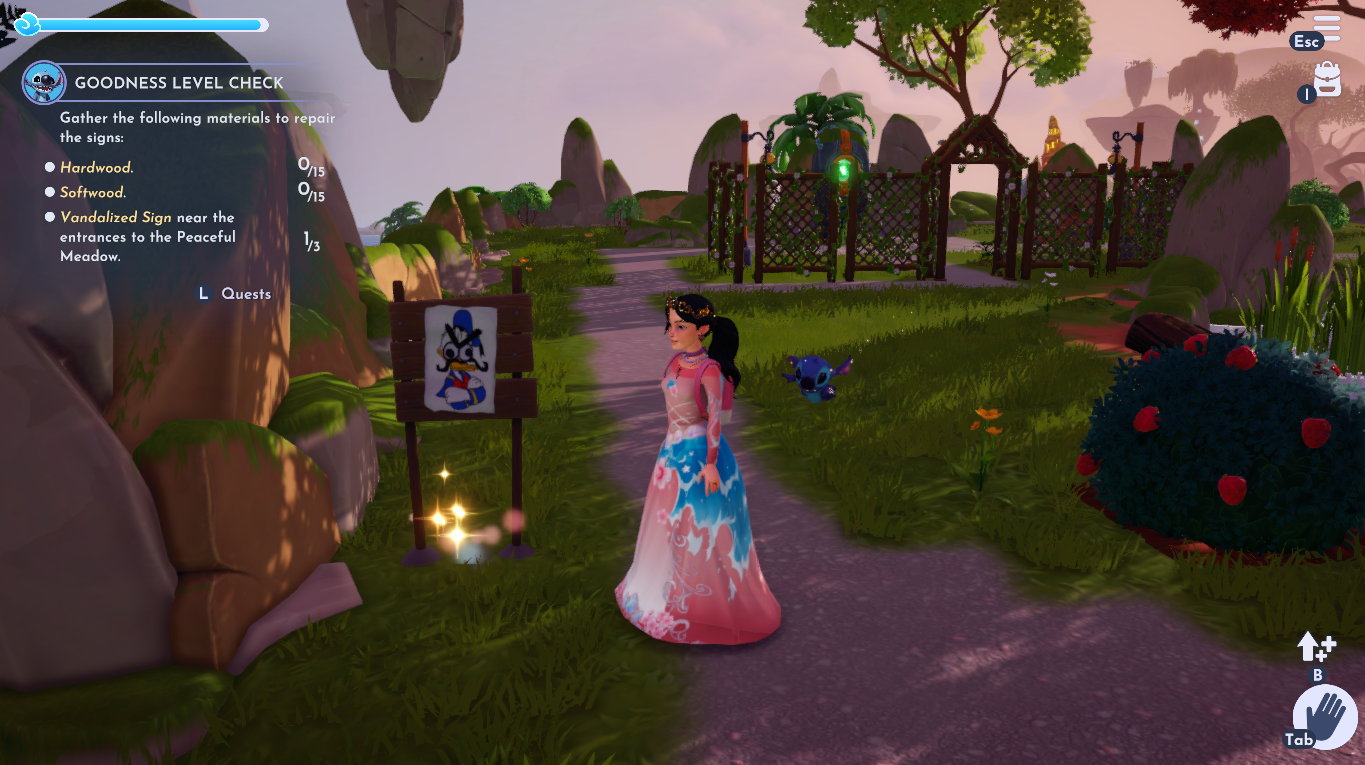 There are two other signs you need to find like it for the quest after activating it– one by the entrance to the Glade of Trust from Peaceful Meadows and one by the Stairs down to the Beach.

After finishing this, it was another hidden requirement needed… This time, I found a Coffee Cup near WALL-E’s garden (do not let the screenshot fool you– this is near where mine is, but the quest very much makes it clear it’s by wherever the Garden you let WALL-E take care of is) alongside a bunch of wheat and soil. 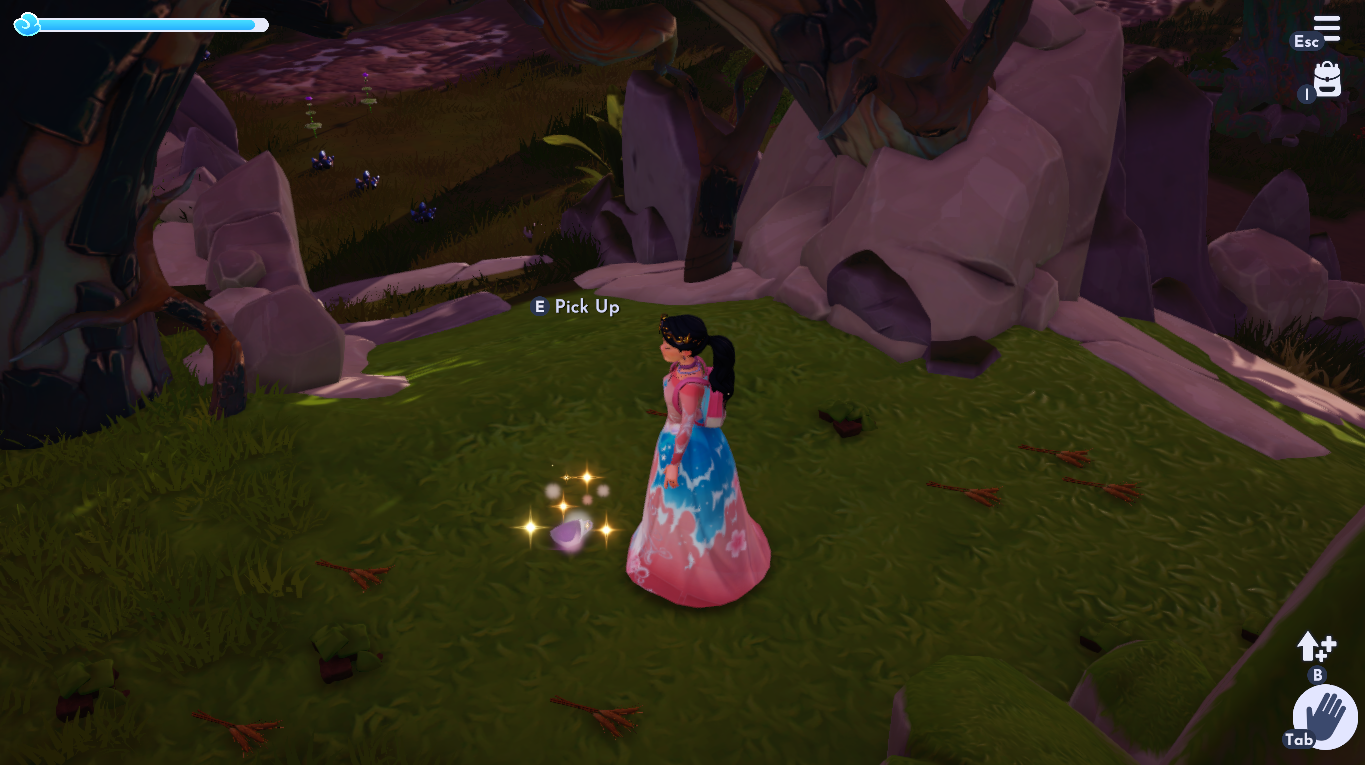 If you don’t see it, try relogging! Or going in a house and back out. Considering the last quest was in Peaceful Meadows as well, if you’re doing them back-to-back like I did, it may not show up immediately.

Stitch explained he messed up the Garden because he wanted Coffee to stay awake and was trying to find some. And while I am not a coffee drinker (Tea is better), I do 100000% agree with this sentiment: 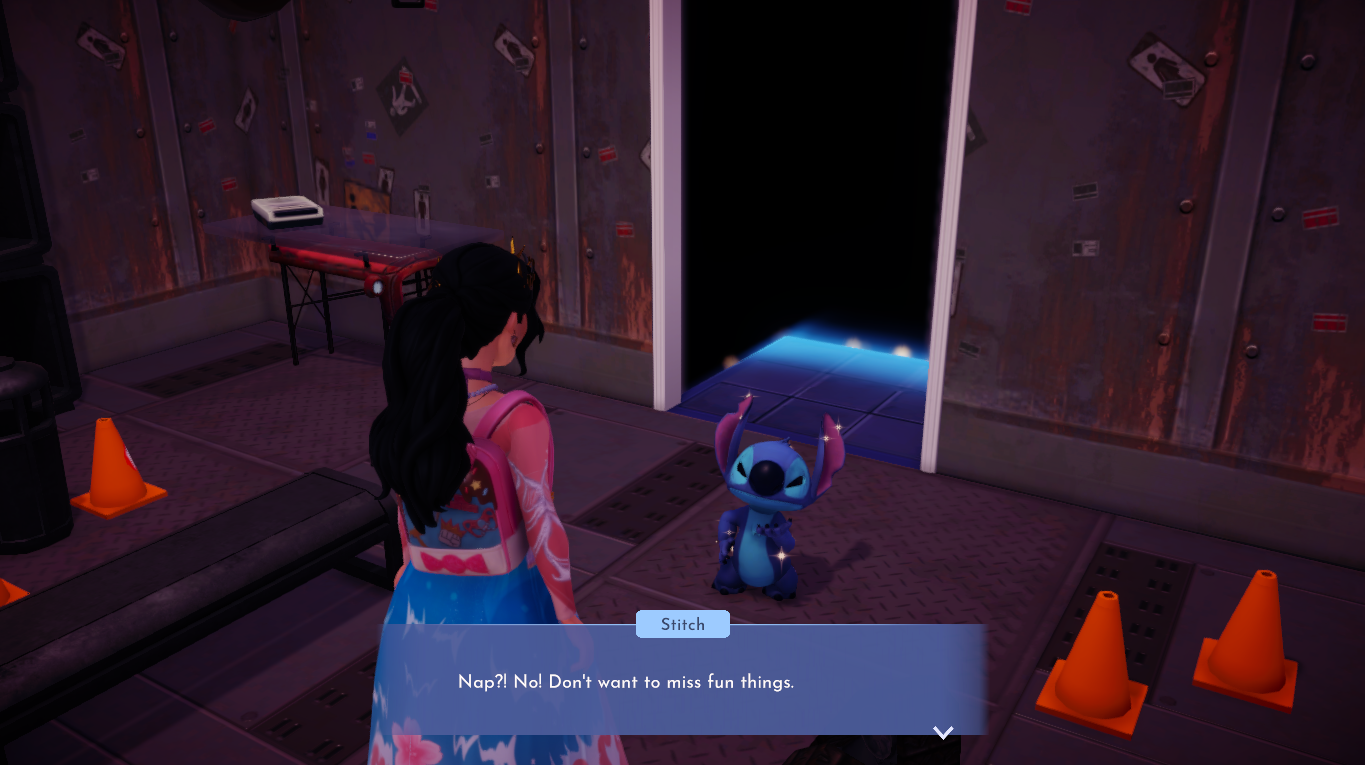 Thanks to WALL-E’s help, we were able to save the Coffee Bean plant. And it grew into a very cute bush (the bushes that grow in the Glade after are around the same size as the Blueberry and Raspberry bushes). 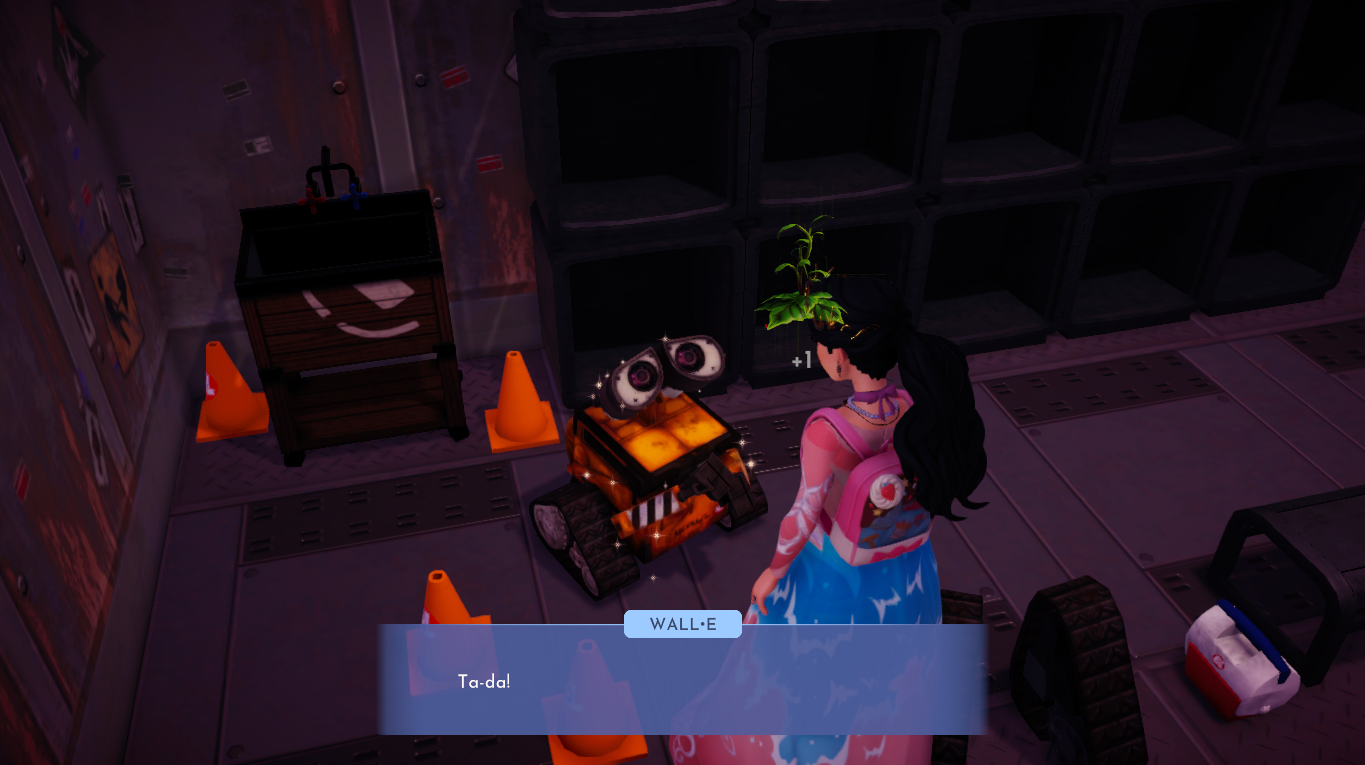 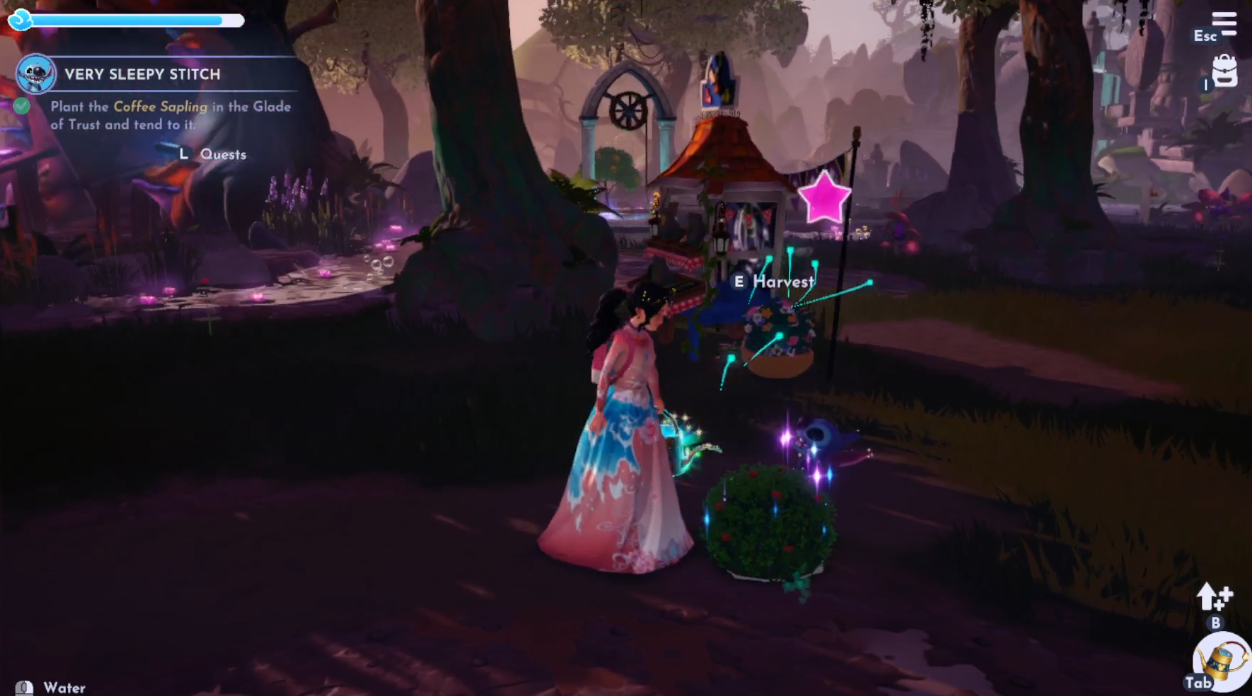 We even managed to get 3 Coffee Beans which is just enough for each of the recipes! Stitch said to talk to Remy about how to make the Coffee, so it was over to talk to him. I did run into a little bug here, but a reset worked out and I was able to continue no problem. 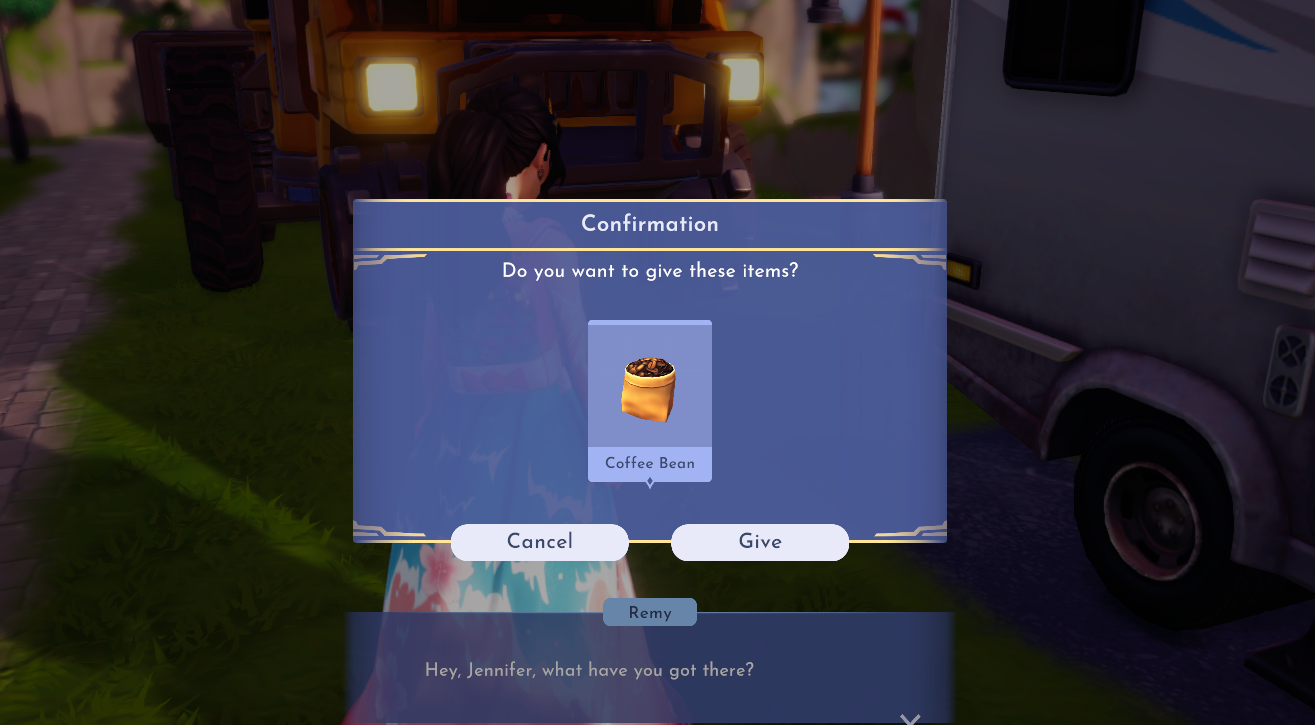 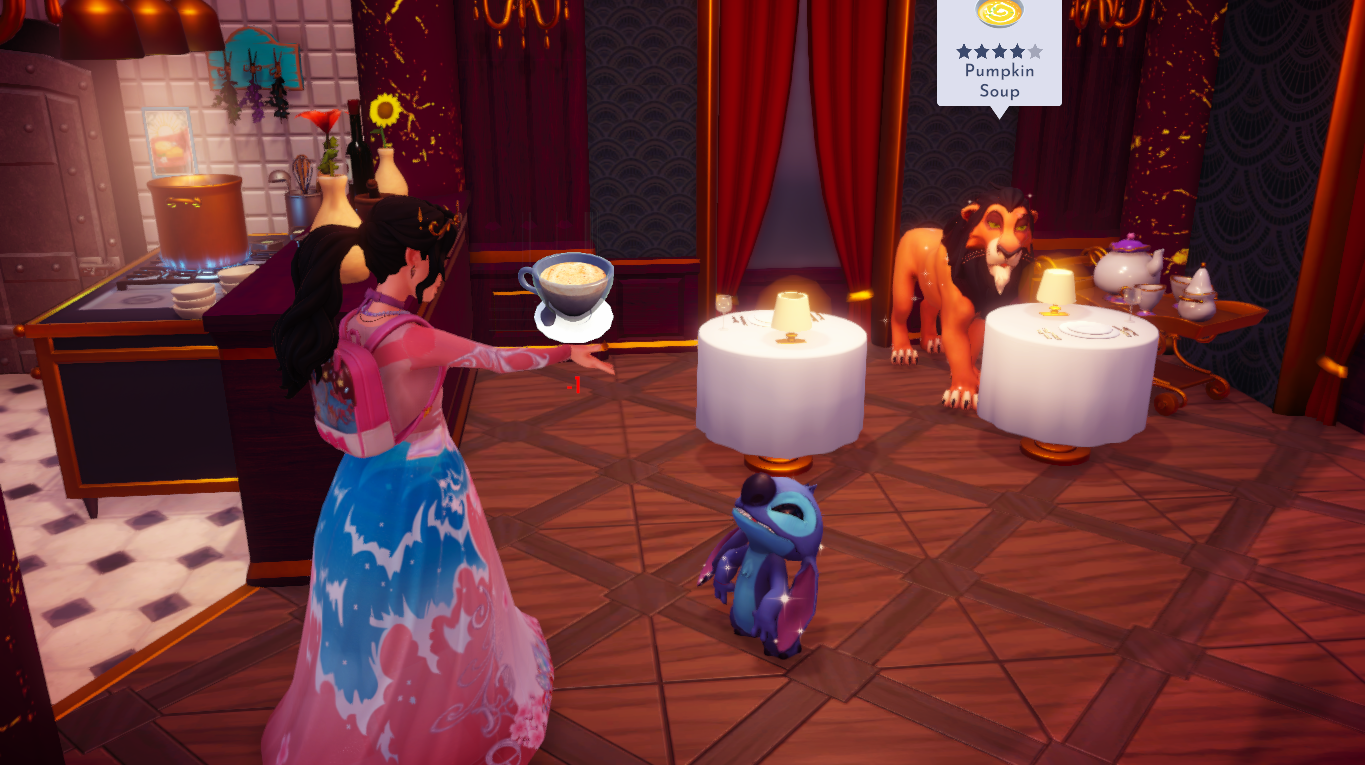 One nice thing is you can ask Remy about how to make the other Coffee Drinks as well and he essentially confirmed what I figured all along:

The next quest didn’t have any hidden objectives, so it was a bit more relaxing. We just had to fix his TV, but I also had to change my outfit to be more of an “Adventurer”. A Princess can absolutely adventure in her Princess Dress, Stitch!! 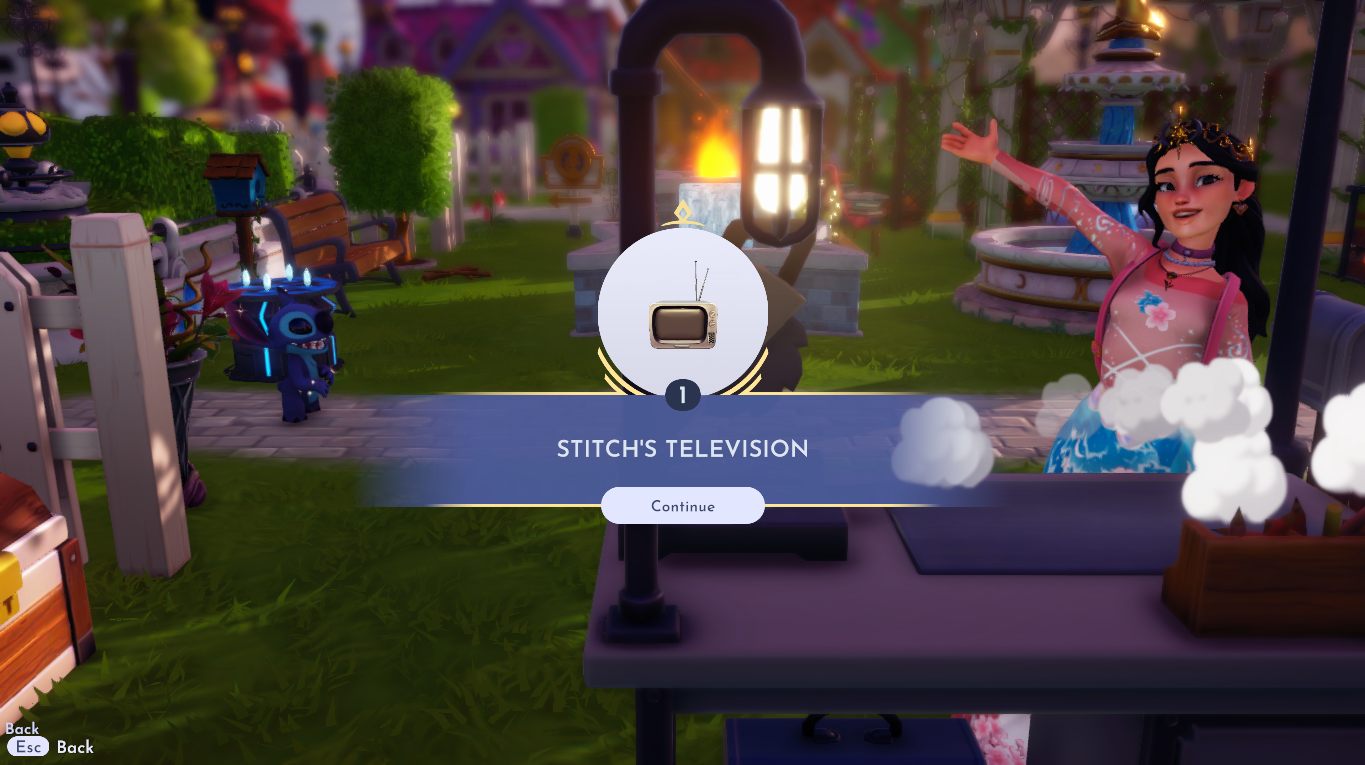 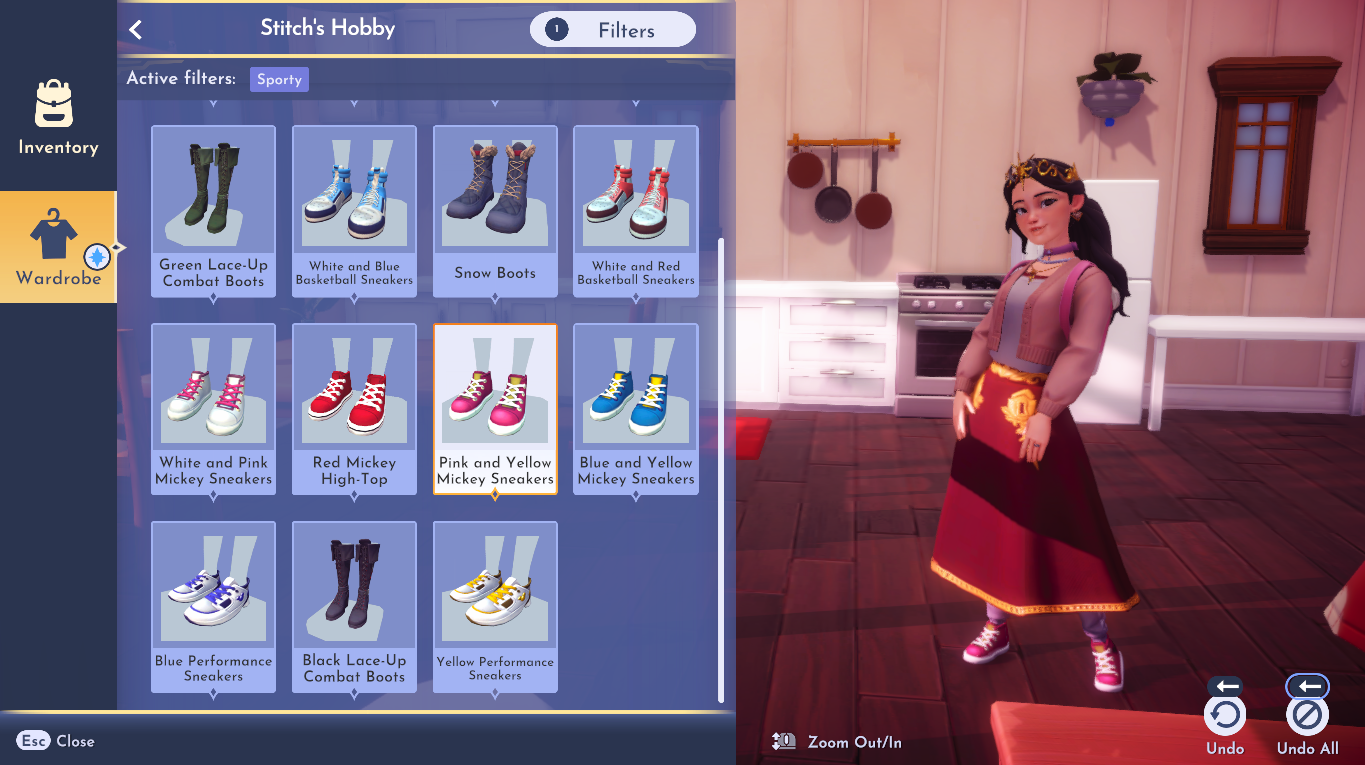 There was then only one quest left… But it didn’t unlock. I have Stitch at level 10 and there’s no other objectives mentioned under the Quest. If it’s the case like Minnie’s and WALL-E’s, I wouldn’t think it’d be in the Quest List at all and if it had a hidden objective or any additional objectives, it’d say that… So, it’s very odd, but regardless, I think it must be bugged in some way and I just hope it’s fixed soon. 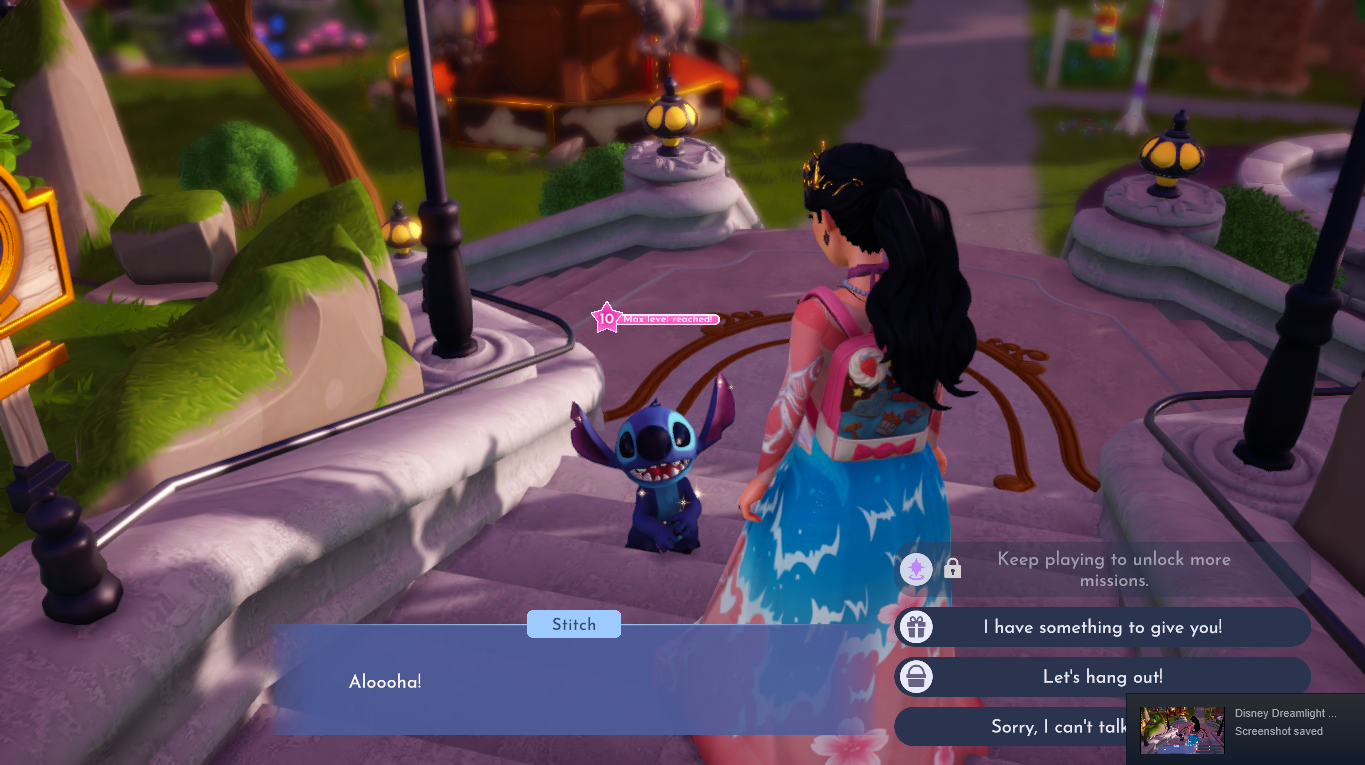 It’s possible it could require an extra day, maybe? I don’t know, we’ll just have to wait and see. For now, I did everything I could! Until the Holiday event starts (Still thinking sometime this upcoming week) and this gets fixed, there’s not much else to do right now… But I’ll update this as soon as I can do Stitch’s level 10 Quest.

As for the Holiday Event, that will get its own post!

Edit for December 17th: Stitch’s Level 10 Quest did unlock today! Essentially, we’re getting a band together and I regret not talking to Merlin as well before talking to Kristoff just for the dialogue/lore. It should’ve dawned on me that would end the objective, especially as Stitch heavily hints that Prince Eric and Kristoff will be the band members (a very royal band crew), but I just ran into them immediately after Remy and didn’t think about it.

I did have to remake the Photo Backdrop for the quest, but thankfully I still had the materials. I also always really like when we do a quest in the Castle. I feel like the Castle doesn’t get enough love. Make sure you use the full camera mode and not the selfie close-up mode for the picture as Stitch has to be at the Backdrop for it to count and he’ll move if you’re in the initial Selfie mode. 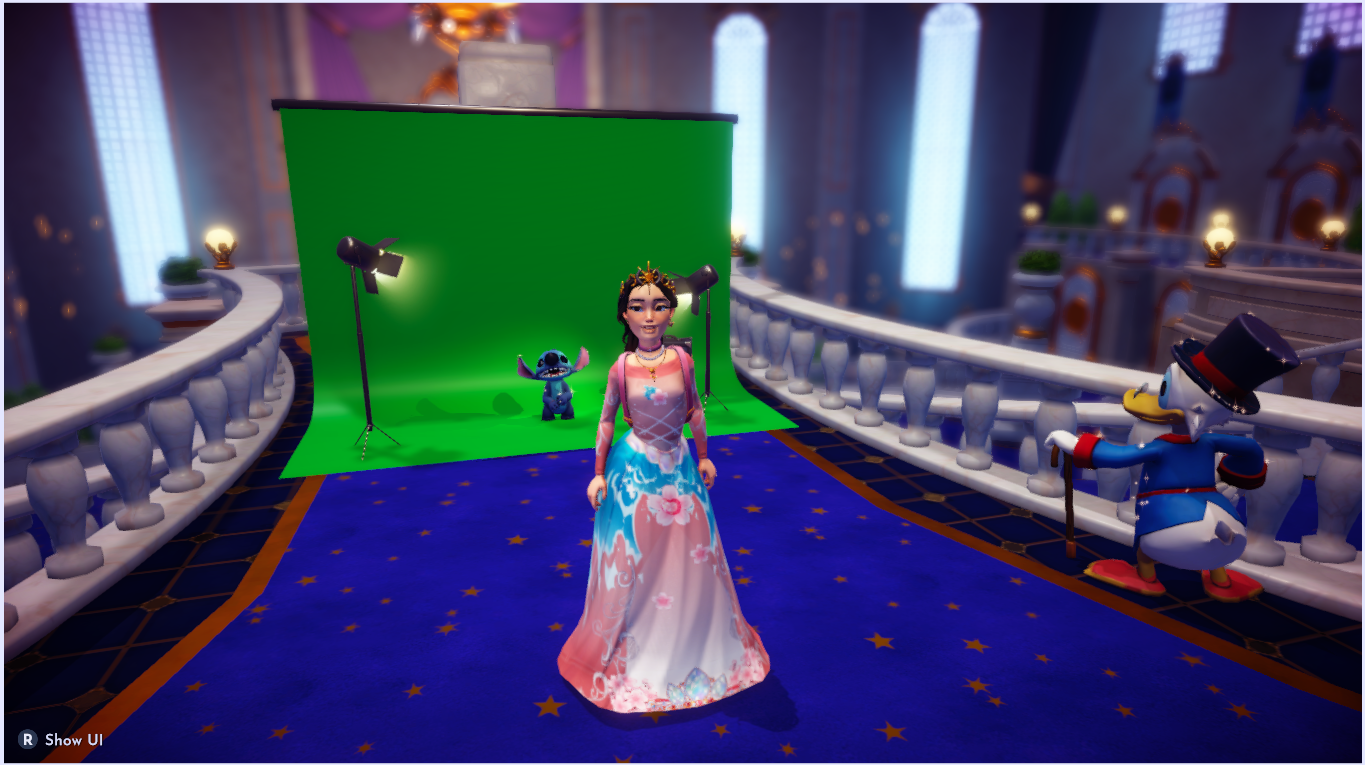 Unfortunately, it’s another day wait before the next part unlocks which I’m kind of bummed about. Especially as it’ll overlap with what’s likely the start of the Holiday event… so I guess stay tuned to a new entry with both tomorrow.

I have mixed feelings on the gating with some of the quests and specific hours as the game is generally really flexible with time-stuff that it stands out. I get that part of it is it won’t feel as much for people when the game is fully out and they are doing everything together, but I think letting people play at the pace they’d prefer, especially as someone who has days where maybe I can play 12+ hours and other days I can only do like 5 minutes, is just much better accessibility-wise and really doesn’t take away from anyone.