So, I’ve been playing Pokken Tournament on and off for most of the day. I’m not a super big fighting game fan or too great at them (I have good days and bad days) so I’m more than a bit nervous that I will be unable to unlock all the items. I believe you CAN get everything through Amiibo though at least so I can just keep trying that. Unfortunately, you can only use 5 a day so it’ll be a while.

Right now, I’m up to the Blue League. I most likely need to beat 5 trainers one or two more times to get in the Top 8 to try and enter the tournament. So far, I have won each of my matches minus overpowered Shadow Mewtwo (though, I did get it to half health), but I am having more and more trouble and I did lose one round (though, I still won the overall match) in the most recent set of 5.

I’ve mostly been using Braixen so far (though, I should try Gardevoir out) and it’s been kind of fun. I still don’t feel very attached to anyone on the roster though and mostly picked Braixen as the attacks seemed more my playstyle. Gardevoir looks like it’d use a lot more strategy than I tend to have in fighting games so I just don’t feel I’d play well with one. I’m still hoping there is a good chance for DLC rosters due to the fact that the roster looks a little silly once you unlock Mewtwo and Dark Mewtwo. I really hope Audino could be considered as I’d love to use a Mega Audino. The only Pokemon with a Mega form that is a support is Latios and considering Latias is a rather similar Mega, there is a chance one could be playable and one could be support.

Moving onto the main point of this entry though… Pokken Tournament’s customization. This is my character currently: 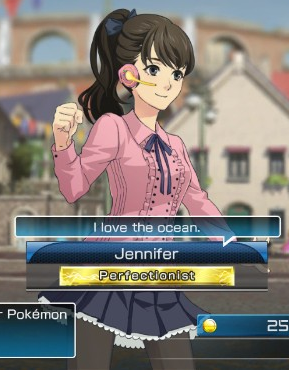 I don’t know if I’ll change the title or speech in the future (there were so many choices though, I felt a little overwhelmed), but I’m happy with those for now.

So far, I have the following outfits unlocked:

I also have these three backgrounds I really like and I can not decide at all which I like best:

And I have these two hearts which I’m not sure if I will get or not–I think they are cute, but at the same time they do seem a bit odd: 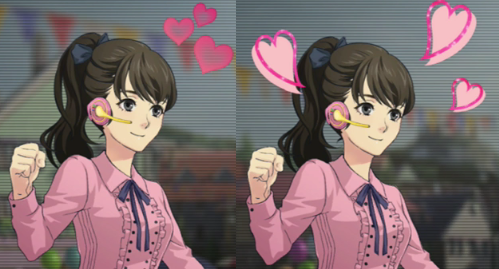 I will say I’m a little disappointed with the options for neck items and Battle AR. There’s only the same AR in various colors while the neck items only has 4 different scarf designs and a pair of headphones you can wear on your neck. I just would have liked to see other neck items and different kinds of Battle ARs.

Moving onto items I haven’t unlocked yet… There’s a lot of outfits that caught my eye: 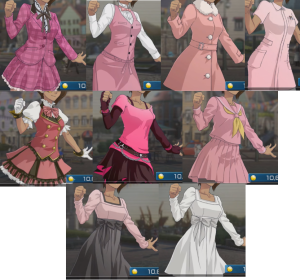 I don’t know if I’d get all of them. I have mixed feelings on the Plaid of the first outfit, not sure if I would get the 2nd, the 3rd is cute but I feel I wouldn’t wear it much… same for the 4th/the Nurse outfit. I like #5 a lot, but I think it could’ve been nicer with a lighter pink and the brown as a different color. The 6th outfit is not my style at all, but I find the color scheme pleasing. I think the 7th outfit would be nicer if the yellow tie was a better color/more complimentary. The last two outfits break my heart though. I hate that all the colors except white are just barely shown and then black for the rest. Meanwhile, the white actually looks really nice in full and just… I wish all the colors were like that. I mean, I put together these quick recolors real quick and I wish they existed: 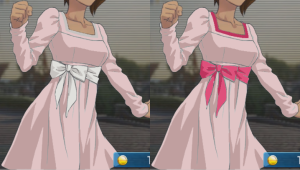 If that dress has some nicer colors, I think it’d have a good chance of being picked. 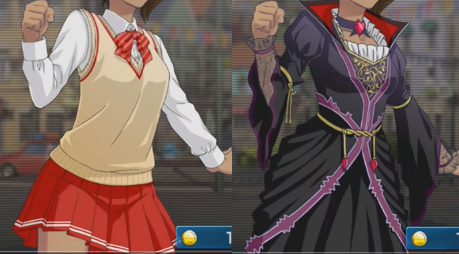 Going back to nice things, there is this adorable Christmas background: 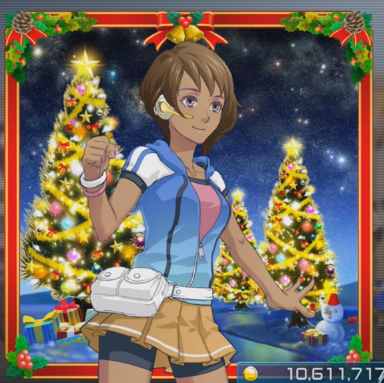 Like the coat, I’m not sure if I ever will really use it, but I think they’d be cute together.

Finally, I will end this with some of the only other hairstyles that caught my attention:

I don’t think any of them will beat out the ponytail I am using though. I would love for the ponytail I’m using to have some ringlets/curls and be longer, but right now it’s a nice length wavy ponytail and that’s good enough for me (even if I wish I could change the bow color).

Also, Credit goes to GameXplain’s Customization video for the photos of all the items I don’t have :)

But yes, moving onto Miitomo… the game came out in Japan on the evening of the 16th (here in the US anyway–that’s the 17th over in Japan :P) and we haven’t really heard much here. Nintendo said yesterday that the game will be out sometime this month, but I am worried we could get the short end of the stick with that.

Right now, the game IS available in English if you find a way to download it (either by having a Japanese Apple account for those with an iPhone or using something like Qooapp or downloading the APK directly with Android). The main thing is you can not connect your Nintendo Account due to the different region (which is why I haven’t downloaded it myself). In fact, if you’re using the English version, even the URL directs to an English version of the albums/site. Considering the game is fully translated and the site seems good to go, I’m really wondering what the delay was. It was said that several different countries (the US being one of them) would get the game the same time as Japan, but that obviously hasn’t happened.

At the moment, for the first week of launch you can get a special bonus each day and a Mario Hat. Will we still get those items here? Will we not get them at all if we start later and then it just never be brought up again? (Similar to how many people did not get the Week 1 shirt for the first LittleBigPlanet due to a glitch causing them to not show up in the store, but as the week had passed, it was never rectified and those who were unable to get it were permanently out of luck) If we do get them will it be for a much shorter time due to starting later? This applies to the various Miitomo Drop items as well–they are only available until April 10th and March 27th. While maybe we can catch the former, we won’t have much time for the latter and we’ll still have significantly less time for both. Will we get an extension on those but get any new things at the same time as Japan? Will there always be some kind of weird delay?

I just wish I knew what the delay was and/or that at least other countries won’t lose out on anything. Whenever Miitomo does come out, I just really hope it’s soon…