So, to everyone’s surprise, a video announcing new Splatoon Amiibo was put out:

Callie and Marie finally get their own Amiibo, which isn’t too surprising in the long run (they’ve had plushies now and are both fairly popular), but it’s interesting how they keep finding more ways to add to Splatoon. They will be sold in a two-pack (retailing about $25) and released July 8th. 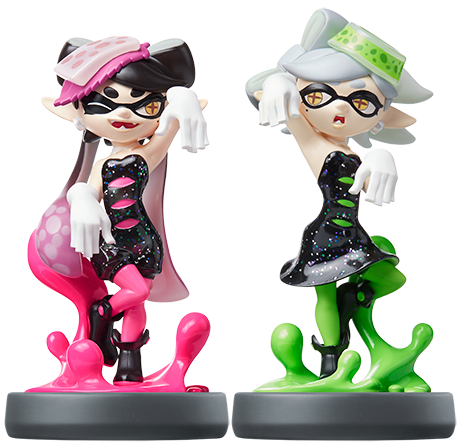 Honestly, they look really great and I hope I’ll be able to get myself a set. They zoom in onto many of the details in the video above, but they are really well-made and look even more HQ than the Splatoon Amiibo we’ve gotten thus far. I am a little disappointed that it seems they just come with new music. While I guess coming with their outfits would probably never happen, I just really want new dresses/clothing in Splatoon. That’s really the only thing that could probably get me to try and play more despite my issues with many of the mechanics in the game. Like I stuck with Mario Kart 8 so long due to my love of the Kart combination I could have :P

But yes, going into the most surprising part… recolors of the already existing Splatoon Amiibo!:

A green version of the female, a purple version of the male, and a orange version of the Squid. There are also some color changes to the clothing and the male Inkling even has a different skin color. I most likely won’t be getting these (well, maybe the Girl Inkling–I really like that shade of green), but it makes me wonder if they plan to do more recolors until they all exist. At the very least, I like that they are doing new color options for things besides just the ink color as well with these. It’s really nice to see. 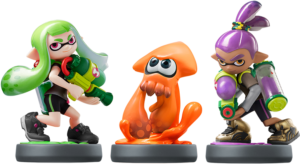 And comparison to the original three: 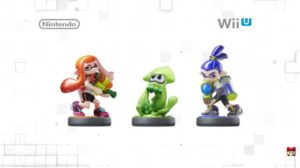 I’m a bit bummed that none of them are matching color sets/the squid still won’t be sold separately as that means someone could have to buy several different sets for all the colors and at the same time, I bought my Inkling Girl & Squid specifically to be customized in a different color and so it feels kind of silly now if they are just going to make other colors anyway… I guess I could just switch the stand out? Decisions. :(

They likely will have the same functionality has the original set with the same challenges and items to get so I don’t know if they are worth getting unless you want an army of different Inklings or prefer these colors.

I do wonder if we more Splatoon Amiibo are in the works as well beyond just more Inkling colors such as the shop keepers, Spike, Captain Cuttlefish, The Great Zapfish, Normal Zapfish (I still want a Zapfish Plushie), and Judd. I don’t think Super Sea Snails have a chance sadly (I love them so much though), but I feel out of those if another was made, Judd would be the most likely.

But yes, along with the announcement you can even watch the second concert that Callie and Marie had in Japan through an official upload from Nintendo of Japan’s Youtube:

And Nintendo of America even uploaded a version of their very first concert:

They are both pretty cool to see so if you love the Squid Sisters and haven’t checked them out yet (or want to see one or both again), be sure to take a look.