So, Pokemon GO is finally out in the US! It came out nearly 24 hours ago for Japan, Australia, and New Zealand and many have been waiting since. I’m not entirely sure what the delay was (At most, I figured it may be they wanted to wait until morning here as it released in the morning there–instead, it’s late evening for a lot of the country and most can’t even play now…), but I’m happy it’s at least finally here! My character: 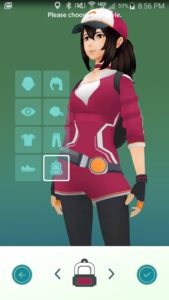 Besides picking Charmander as my starter, I also caught a Doduo! While I have no plans to record the game (it uses up enough battery–don’t need to help it), I am hoping to do daily or weekly updates about Pokemon I’ve caught until I’ve caught all Pokemon currently available. A page will be up soon to keep track of my progress :D

But yes, I hope you look forward to more updates! If we do end up going out tonight despite it being 9:30PM, I’ll edit this with any other Pokemon we may catch.

We’re pretty lucky as there is a PokeStop RIGHT around the corner with another just a couple of blocks away so at least we’ll be able to get some stuff everyday! :)

Edit: So, as promised… we did go out for a little bit towards the first PokeStop! I managed to get 4 Pokeballs and an egg from it! I can’t wait to see what it hatches into.

I also caught a Horsea! :) While I don’t expect to catch anything else tonight, I’m looking forward to walking more tomorrow!

Edit 2: While taking care of some things before bed, a Pinsir showed up! Another Pokemon caught :D

Edit 3: Got a Poliwag! And earned my first medal!: 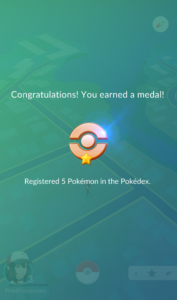