While nothing happened yesterday, I caught a Ponyta today!! It was my first time seeing one and it was a great surprise.

One of my eggs hatched! Just a Tangela though :( I also am only 2 Poliwag away from getting a Poliwrath so keeping my fingers crossed…

Caught enough Poliwag to get a Poliwrath! Yay!

One of the things I’ve noticed is I rarely see Pokemon lately unless near a Pokestop. Normally I’d see several Pokemon while in the car with someone (Don’t worry–I have never been driving in these situations) just along a highway or something, but lately unless there is a Pokestop nearby, the entire area is kind of barren. I ended up only catching a few new Pokemon at the destination despite being out for over 2 hours and that was it.

On a positive note, I did get two new Pokemon though–one of my eggs hatched into Vulpix and I finally caught a Grimer at home.

Not much happened today, but I did get another Gold Medal so yay~ 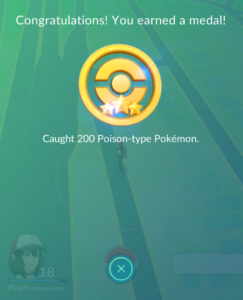 Caught enough Exeggcute for an Exeggcutor! We’re off to California soon for a few days so crossing my fingers for lots of Pokemon :D

While at the airport, I also captured my very first gym! 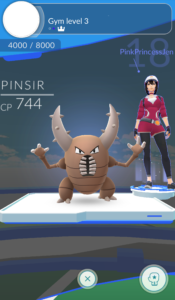 Once we arrived in San Francisco, there were pretty much Pokestops and plenty of lures everywhere: 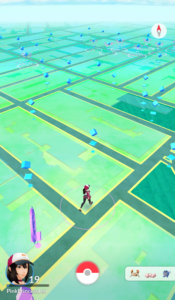 I managed to catch a Kabuto and some of my eggs hatched–the 10KM one hatched into Jynx while two 2KM ones hatched into Rattata and Magikarp, and a 5KM hatched into Goldeen. The Jynx was at least new and I’m not too upset with the Magikarp (I can use the candy), but I wish the other two were better.

We’ve been hitting so many Pokestops that our Eggs fill back up fast and our inventories have been maxing out. I’ve started tossing away some potions…

So, we went out and about today and there are just so many Pokestops and Lures: 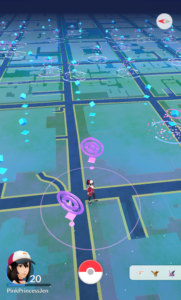 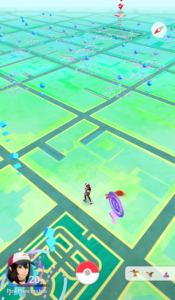 We’re constantly running out of bag space and I’m close to being out of space for Pokemon too. My eggs even fill up right after hatching one… While I didn’t get anything new from eggs sadly (nor any new 10KM eggs), I did manage to catch a Porygon and Machop! Plus I was able to evolve an Eevee into Flareon, an Ekans into Arbok, and a Paras into Parasect so I got some good new Pokemon :)

I also managed to claim one gym twice: 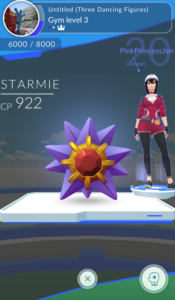 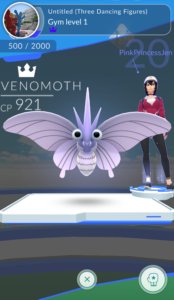 I hope tomorrow goes just as well. The only sad thing today were the three Pokemon we missed–usually because we had just got on the trolley going the other way so we missed Lickitung, Snorlax, and Slowbro :( I hope we might see them tomorrow. Also a Diglett which showed up while at the hotel, but ran away immediately :( So upset…. Now I have 2 more in Seen… I hope we can catch one tomorrow.

I’m super mixed on the new tracking system though. While I don’t know if I agree footprints are the best option, I feel like it takes a lot of the exploration out of it because a lot of people will head to a PokeStop anyway for items… Not to mention I feel like less Pokmon are out and about because of this now too.

Today wasn’t as great as yesterday–I didn’t catch anything new and even my eggs just hatched into extras. I did evolve an Abra into Kadabra at least, but that is bittersweet as I accidentally transferred one too many and now do not have another Abra in preparation for Alakazam… I hope I catch another Abra, Kadabra, or even just an Alakazam soon…

I did, however, take over this gym twice which was fun: 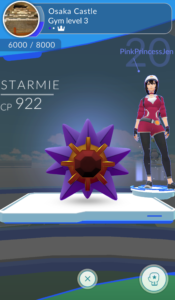 It even let me get my first Training and Gym Battle Medals so yay. Unfortunately, my last Defender bonus had yet to end so I couldn’t get coins for it before it was taken back… I really hate the wait time and wish it rewarded you instantly :/ Some people don’t even get time to get to their Defender Bonus even when their timer is up due to how fast some gyms can go down…

We’ll have a busy day tomorrow though, so I hope I can catch a bunch of Pokemon. 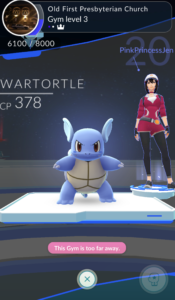 So, today was interesting. I managed to evolve more Pokemon so I now have a Golduck, Jolteon (which finished out the Gen 1 Eeveelutions), and Tentacruel (FINALLY. Now if I could just find a Diglett to match my counts up again…).

I’m also super close to evolving Dratini and Magikarp–I’m only one Dratini away from Dragonair and just 9 Magikarp from Gyarados. Hopefully I can get them while back home. 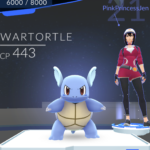 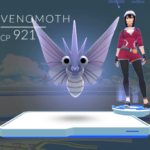 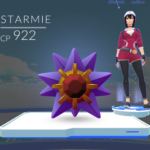 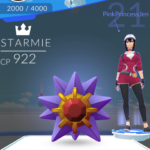 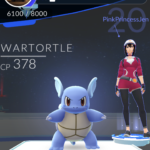 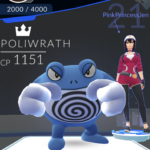 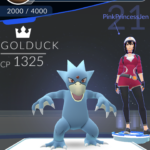 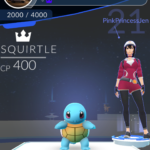