While there’ a lot going on today (March 10th) as well, we still have a lot to talk about leading up to it as well…

With a handful of changes done to fit in the new Mario items, I continued to see how things adjusted, but also work on doing more with the different stages of trees.

With March hitting, we also got a new gift from our in-game Mom– this time some homemade candles. I wish I was as talented as our Mom apparently is. She ended up giving me one of my favorites of the candles too. 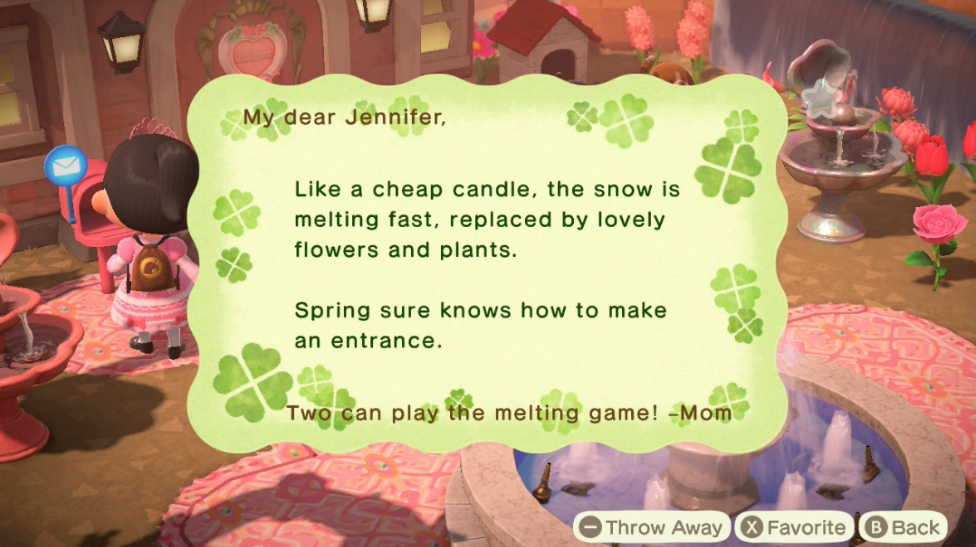 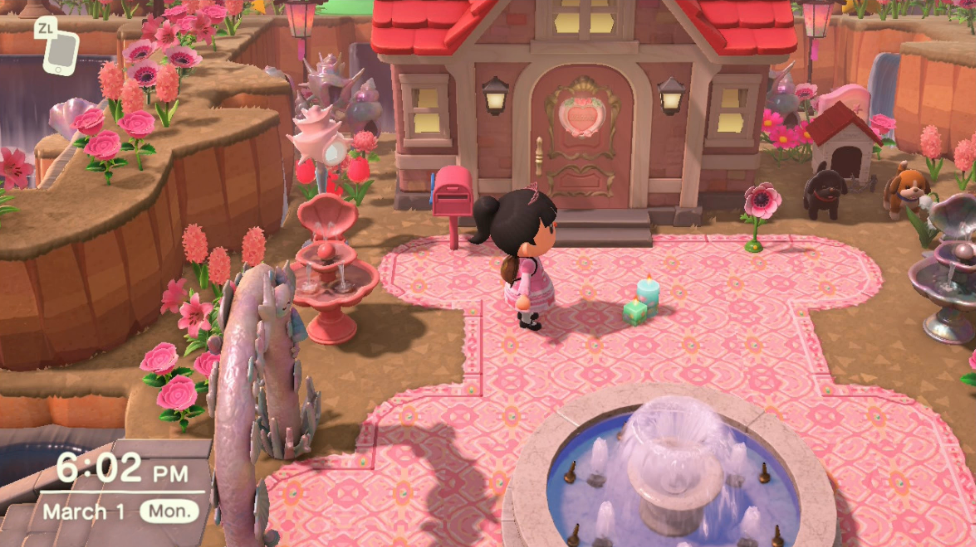 As for the Mario items, I did some coin adjustments as planned and I think this looks a lot nicer. 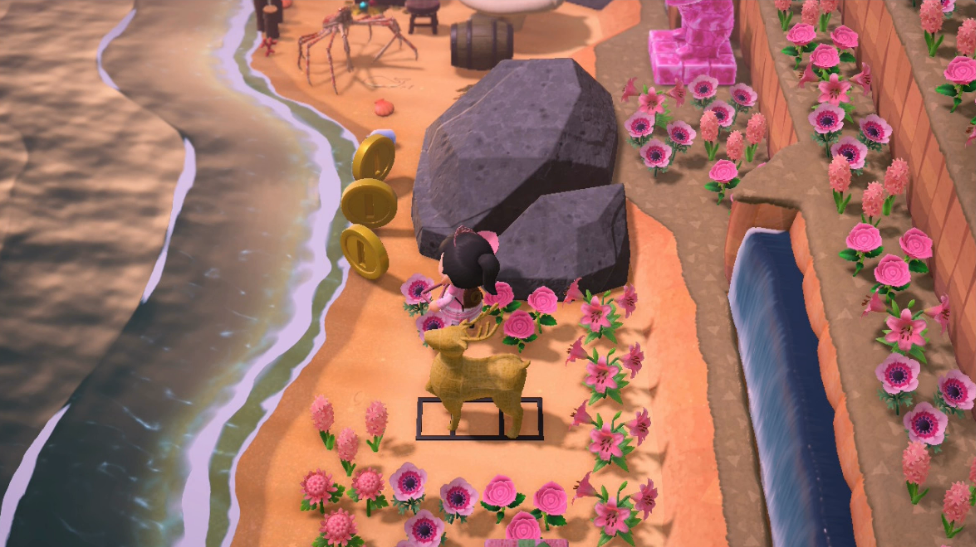 Risha kindly let me stop by her town to pick some flower petals incase of any future flower recipes. Now I have a full stack of nearly every flower. 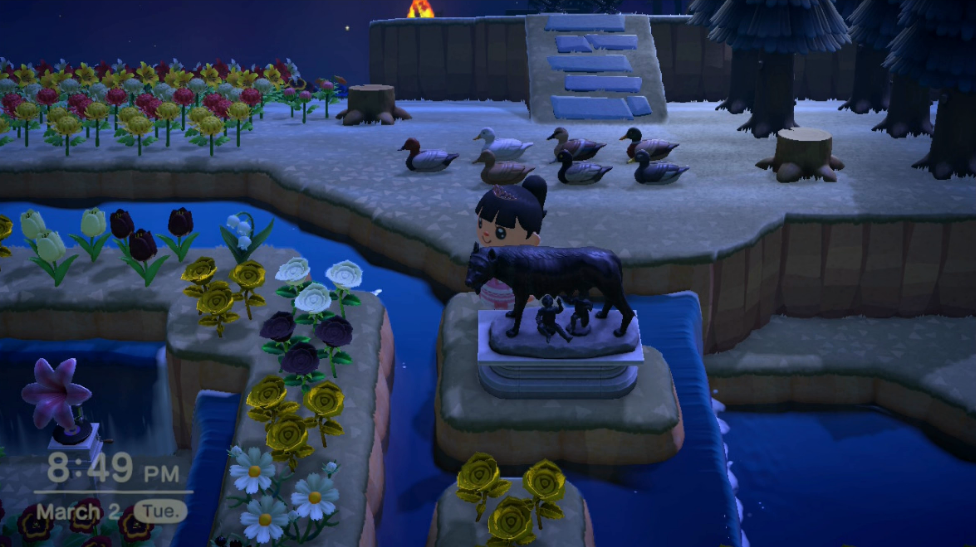 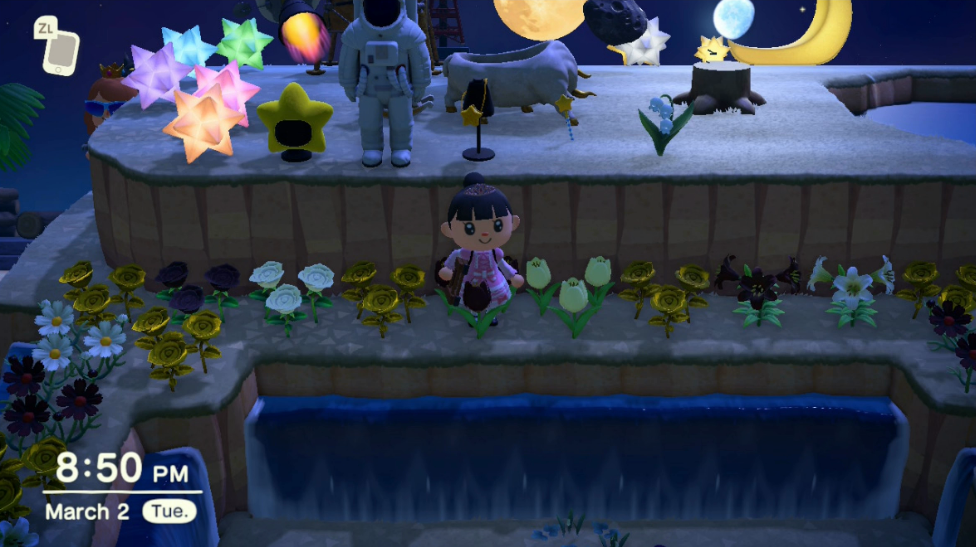 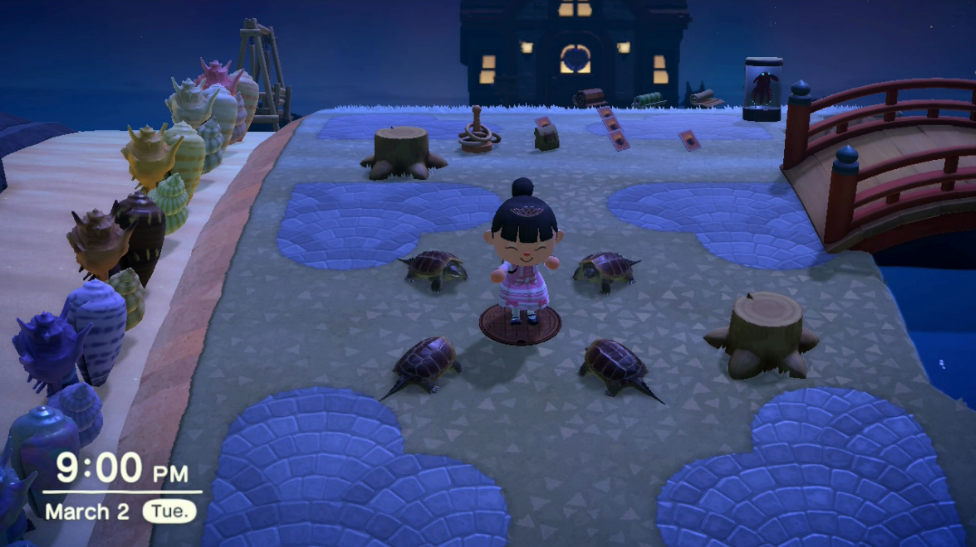 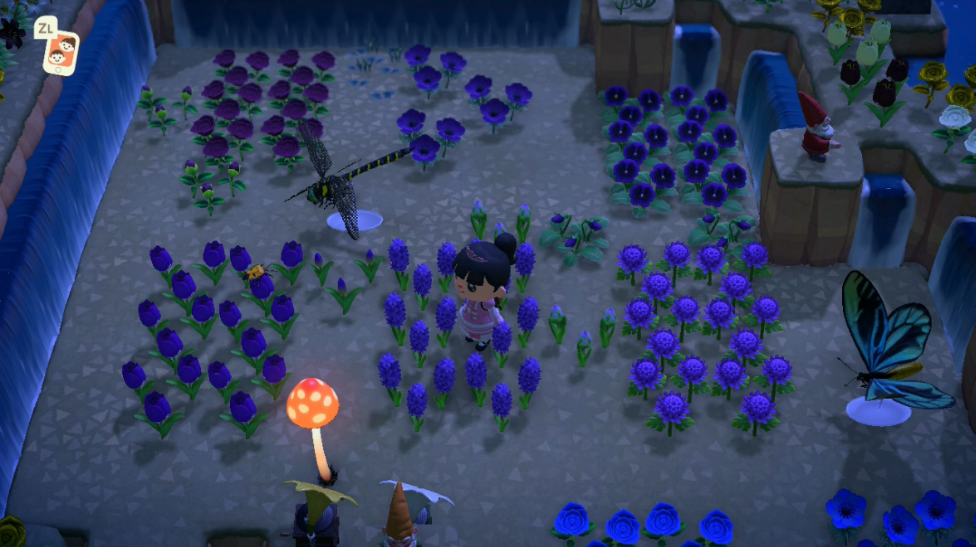 I also ended up running into Teddy and Diana where they were having a Tongue Teaser Battle which wasn’t an interaction I had run into before. Diana won in the end, but how fast could you say “How many books would Tom Nook cook if Tom Nook cooked his books?” (please don’t cook your books) 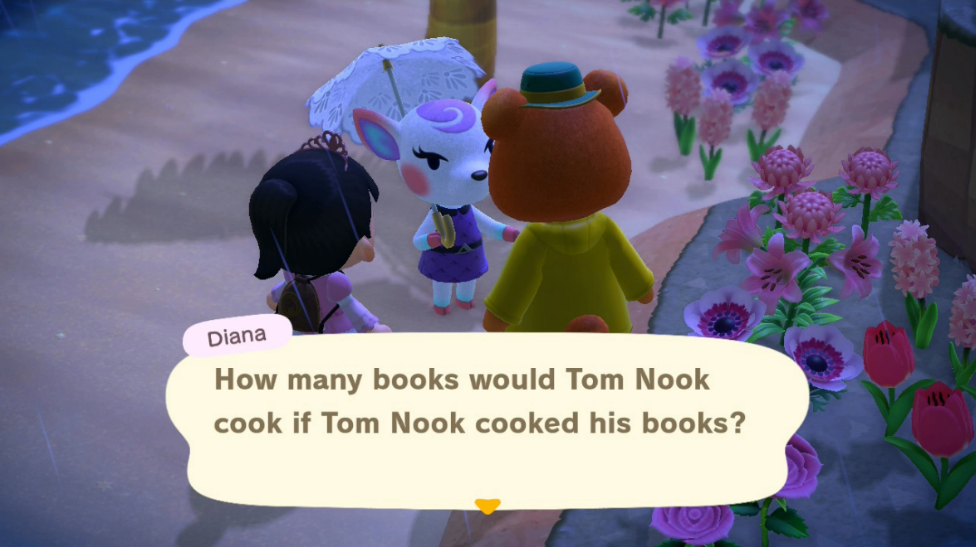 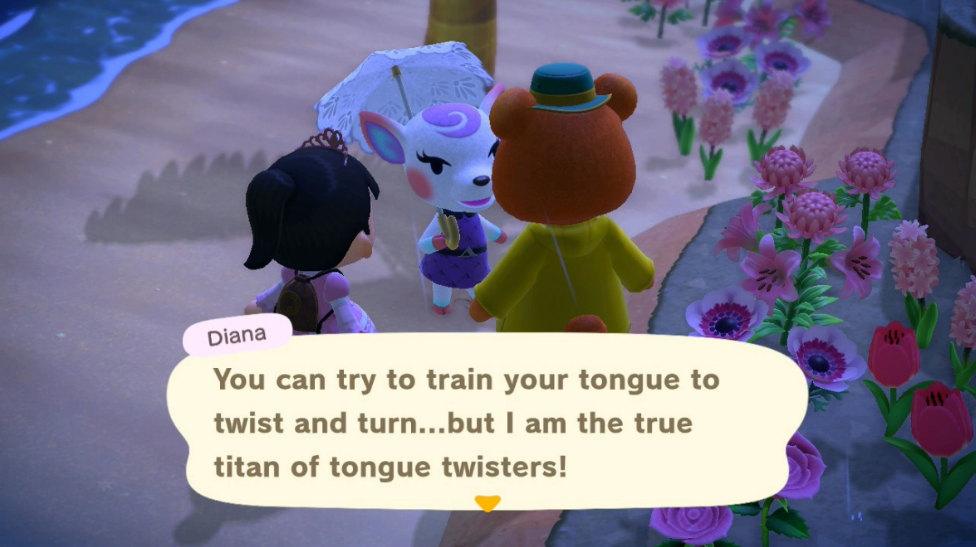 Continuing to make other adjustments around the island, I adjusted my garden, moved a pumpkin to Flurry’s house, and continued to accessorize the beach. I also added some trees behind our lovely Dinosaur friend to give it a little more depth. 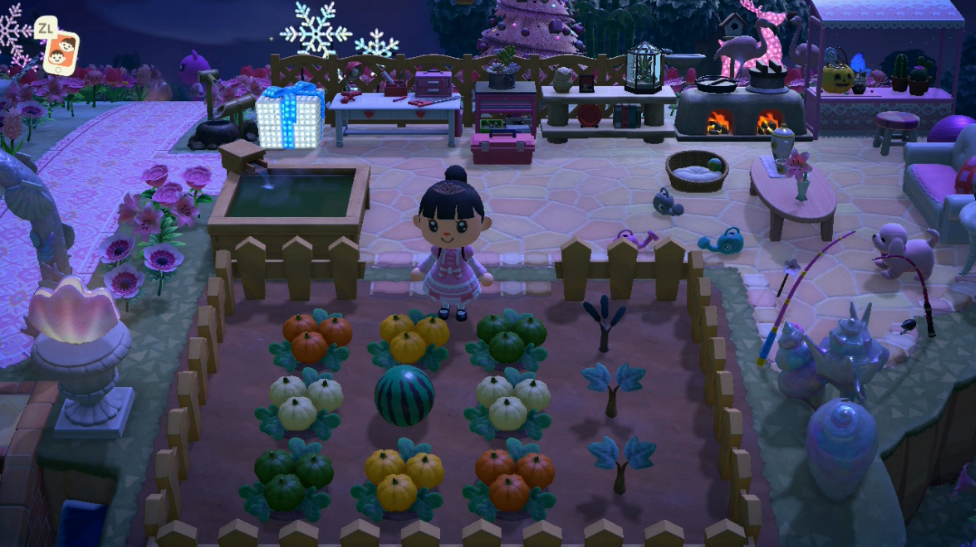 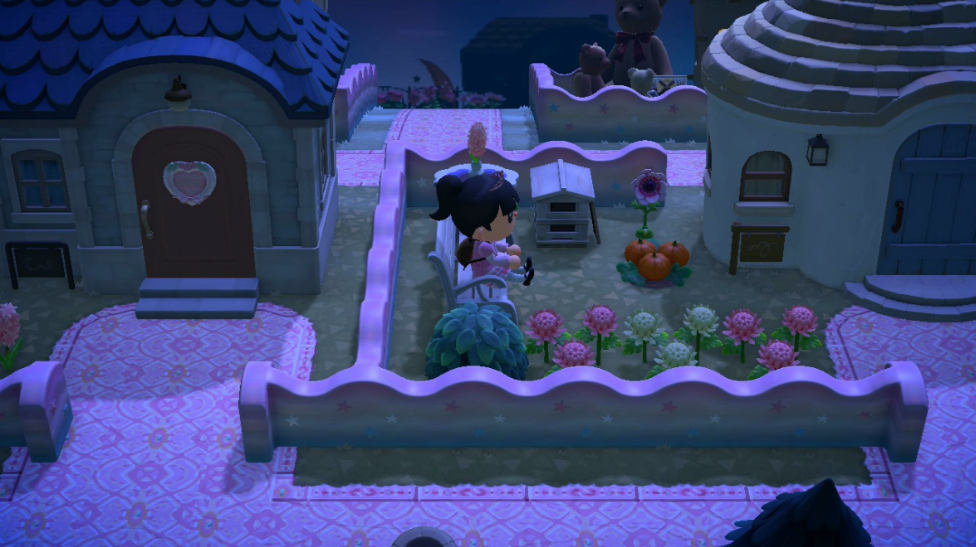 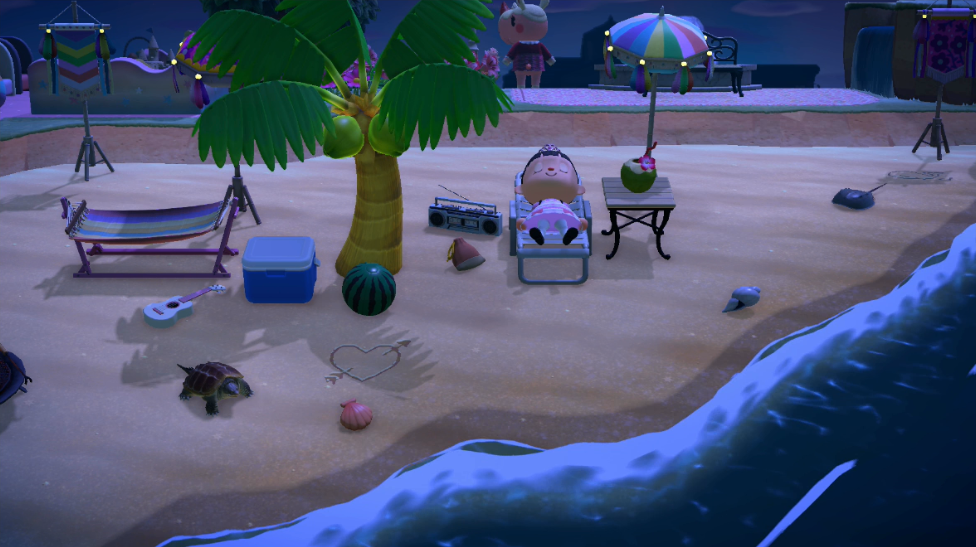 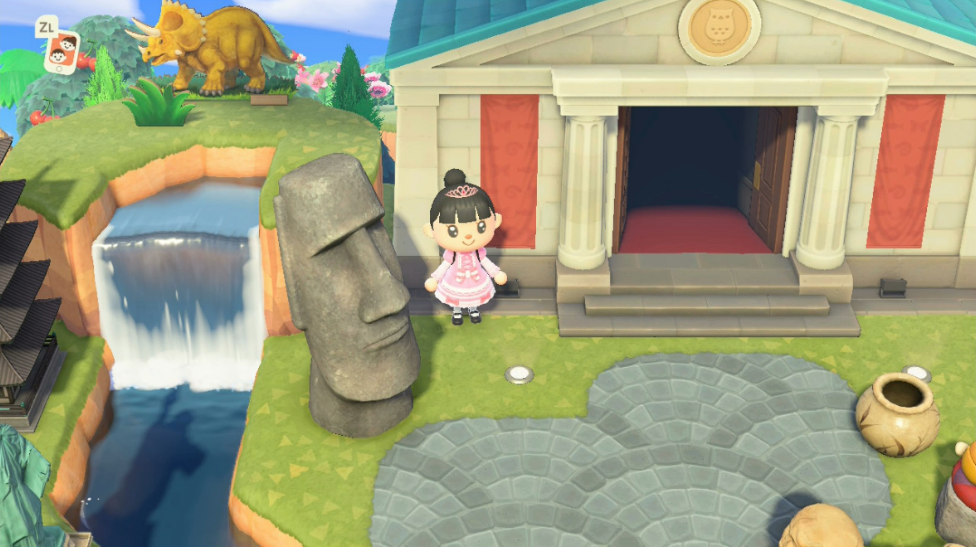 I had tried to control the balloons in order to get a present in a specific spot, but unfortunately, it didn’t work out to say the least. 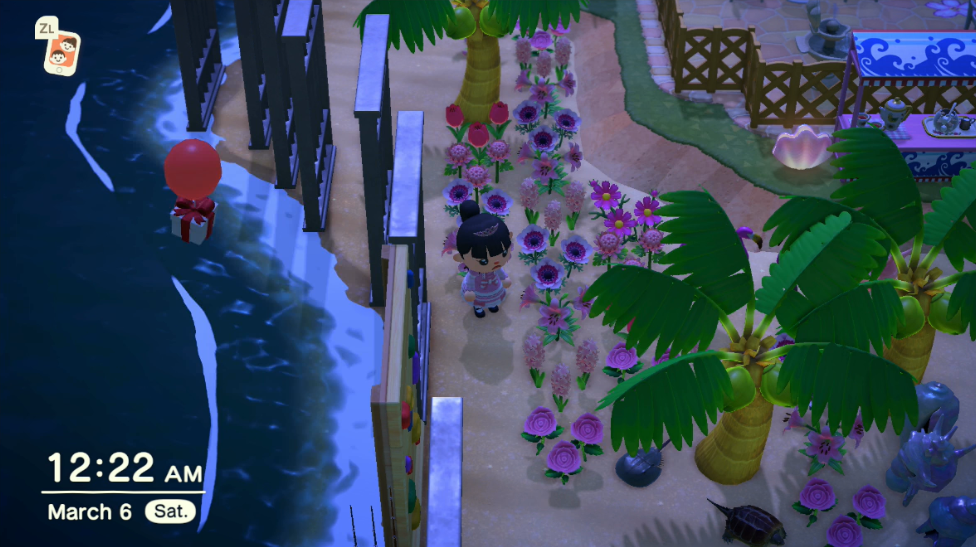 For one, the Jail Bars don’t actually Filter the Balloons so much as they don’t let them pass. This means that a Balloon could still spawn where a Jail Bar is blocking– just it won’t get past and it’ll bounce lower. It’ll ALWAYS bounce lower so if you want it up at a higher point, you just… won’t get it this way. This doesn’t have any effect on the RNG. Similarly, you can’t have Balloons spawn in the highest or lowest acres so it’s just… super close RNG to pray it somehow spawns right below the line between B and A otherwise all I can do with the Jail cells is bounce it down to the very bottom… which is completely useless for me.

Thankfully, Duck is working on a Cyberpunk town right now so I’m glad the jail bars at least didn’t go to waste.

Interior-wise, I flipped around the screen as it felt more likely you’d be looking at it while in a bathtub taking your bath and maybe relaxing over sitting on the toilet. 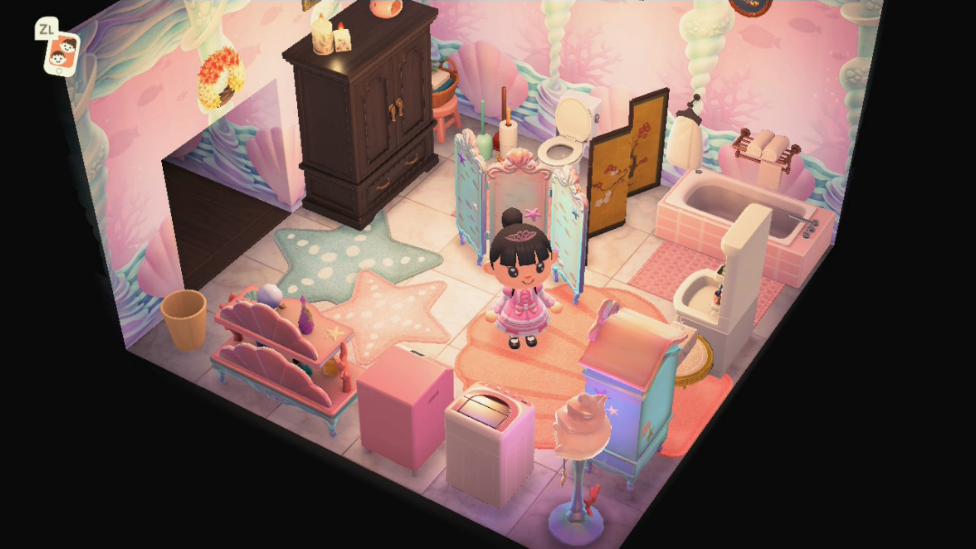 Meanwhile, I got things prepared to finally scan in all 461* Amiibo Cards and during my testing, since it was my first time scanning some, I ended up getting a call from Harvey about the posters. 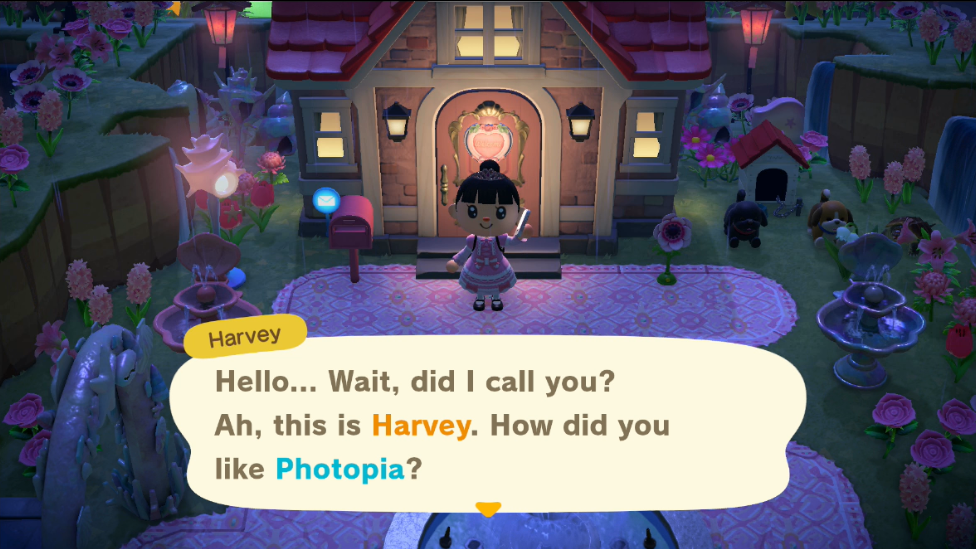 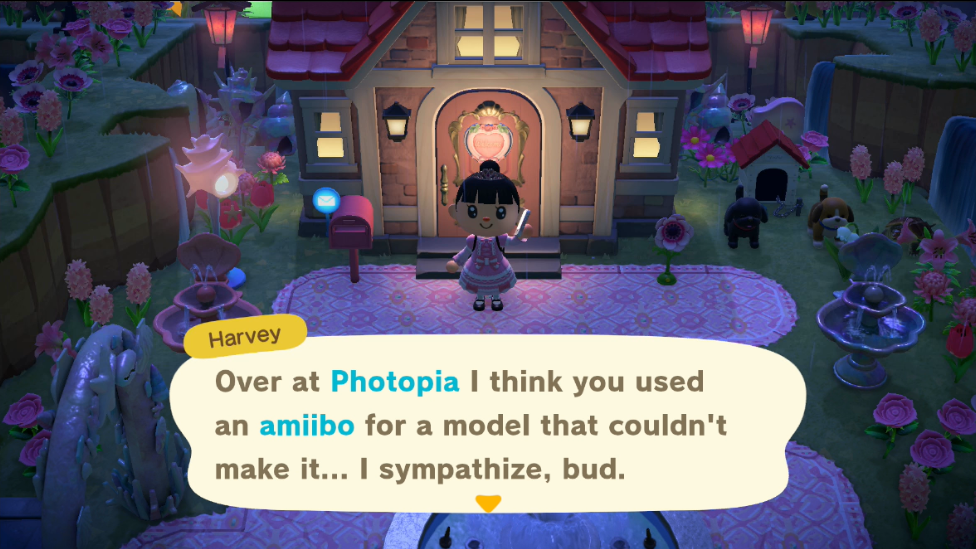 *461 is because there’s 100 cards per series (with four total series thus a total of 400 from the normal sets), 50 Welcome Amiibo RV Cards, the 6 Sanrio RV Cards, and 5 Promo Cards from the original set– the 3 cards from Amiibo Festival plus special ones of Isabelle and K.K. Slider through magazines in Japan.

Finally, March 10th arrived bringing us the new Shamrock items! For one, there’s the lovely Shamrock Soda, a Shamrock Rug, and also a Shamrock Doorplate for your walls or door. There’s also new clothing available through Able Sisters, though, I think I have my own green outfit I like a bit more. 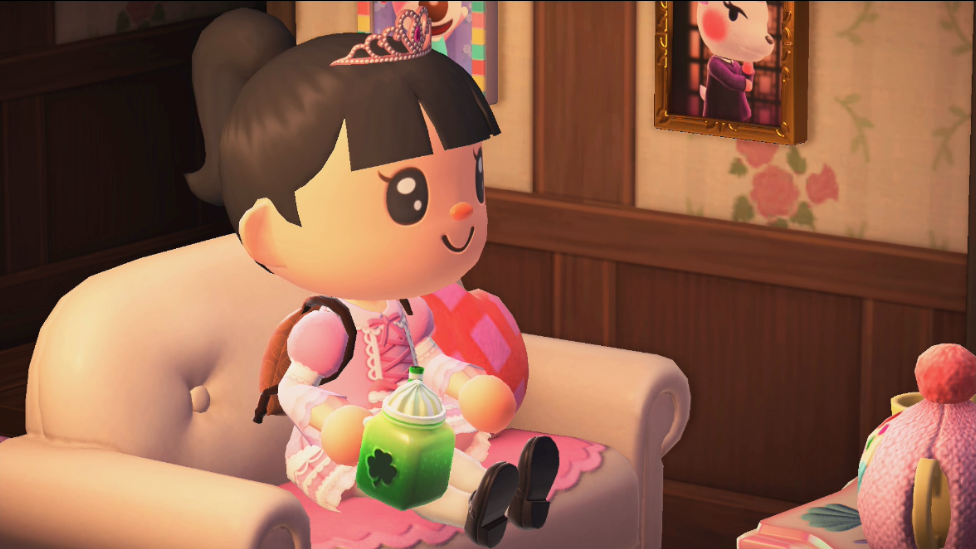 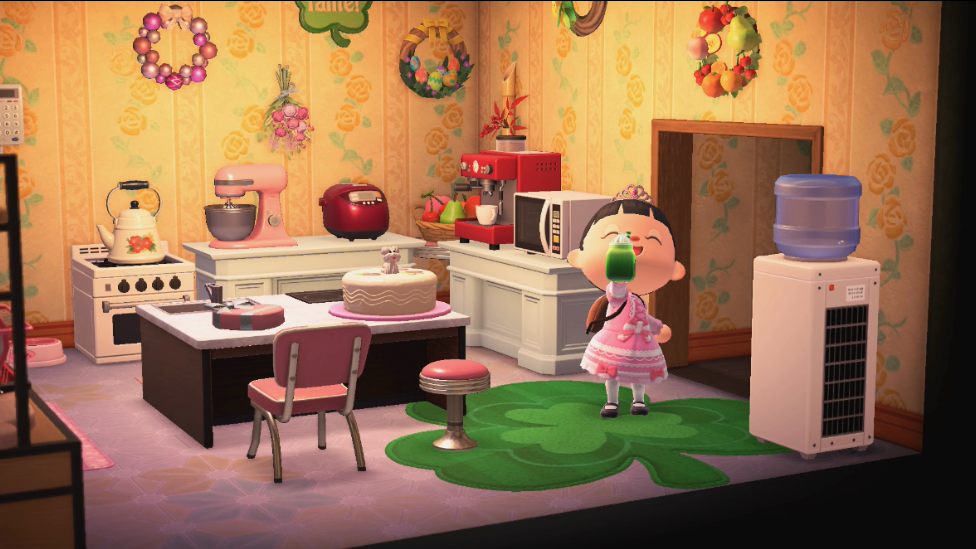 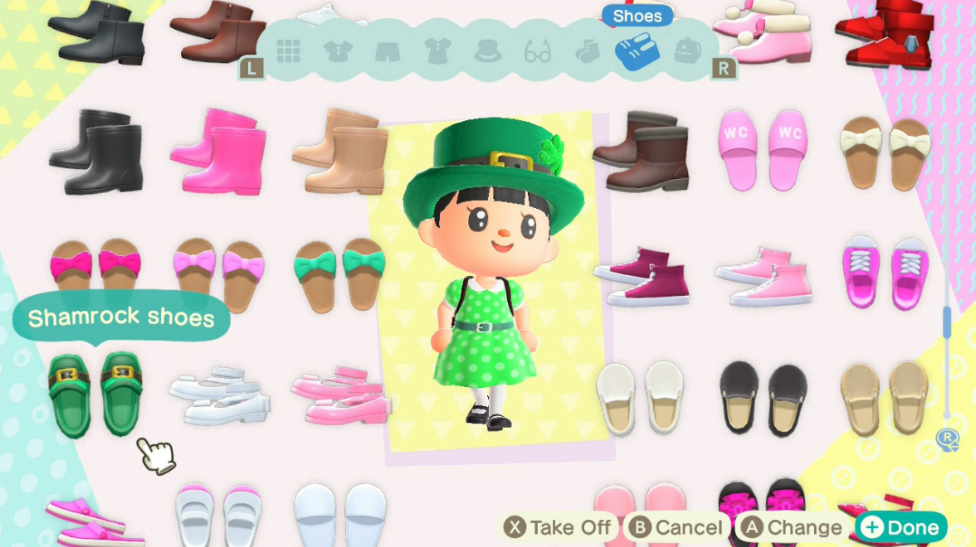 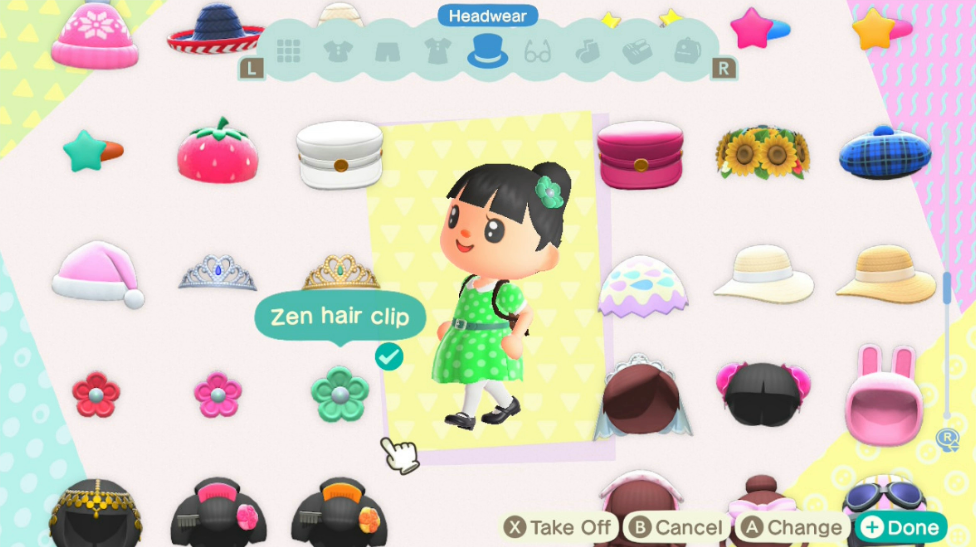 For now, only the Door Plate is sticking around, but can you tell what item is probably my favorite of the new Shamrock Day stuff? :P

Meanwhile, in honor of MAR10 Day, Nintendo updated their official Dream Address once more with some new things set up using the new Mario items. I made sure to dress for the occasion. 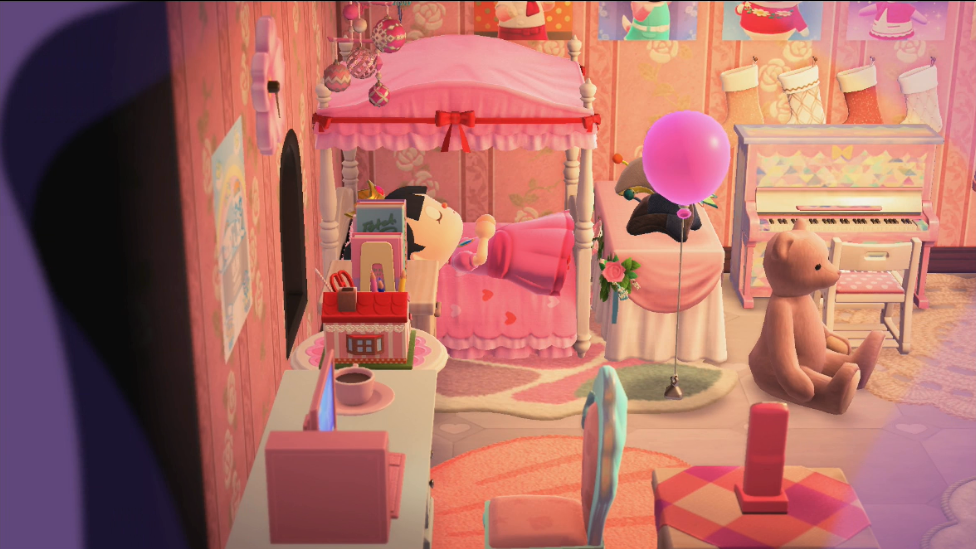 Not too much changed since the first time I went besides literally the season and construction area replaced with the Nintendo stuff, but it was still a lot of fun! If you would like to visit, the Dream Address is 6382-1459-4417 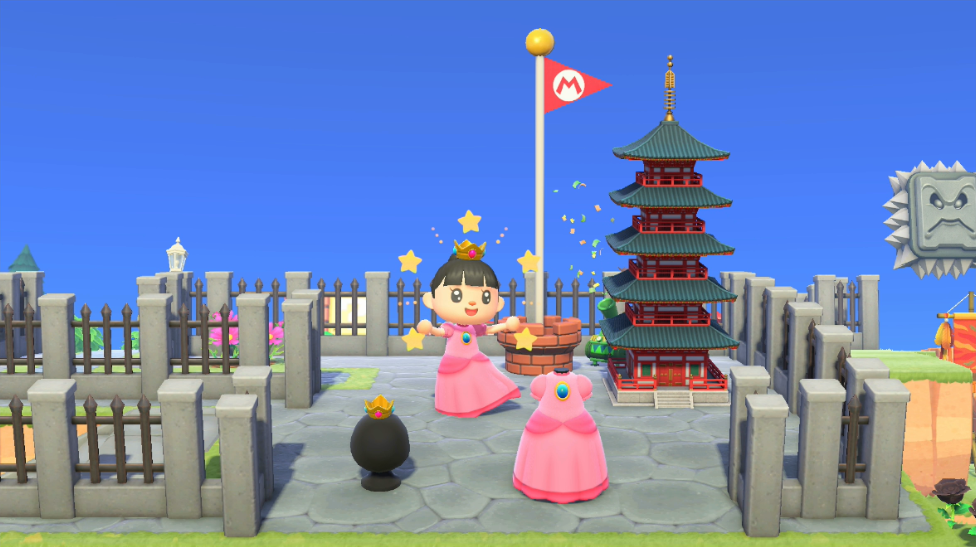 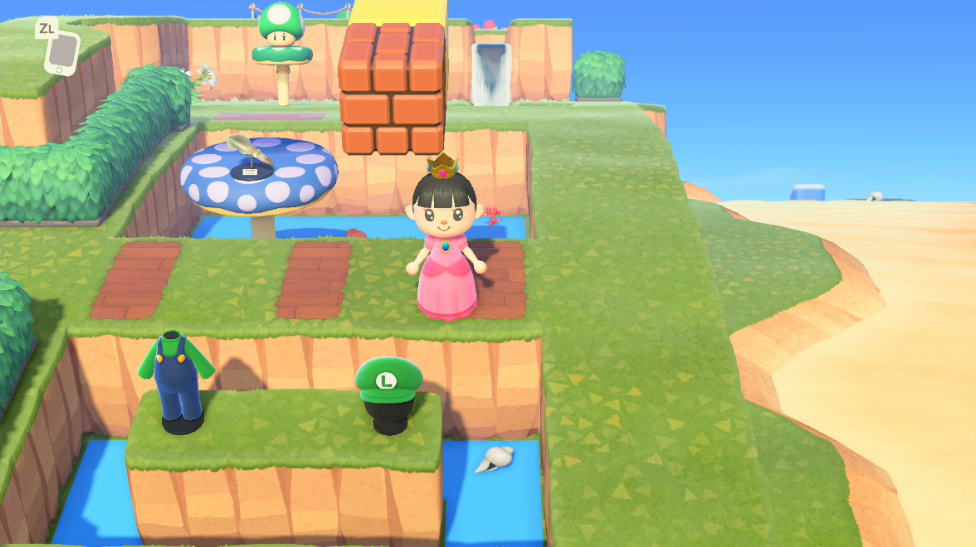 It was also Judy’s birthday today!

Finally, going back to the Shamrock stuff, there’s also a new DIY available through Balloons this week (essentially from the 10th through to the 17th): A Shamrock Wand that essentially just looks like a cane. 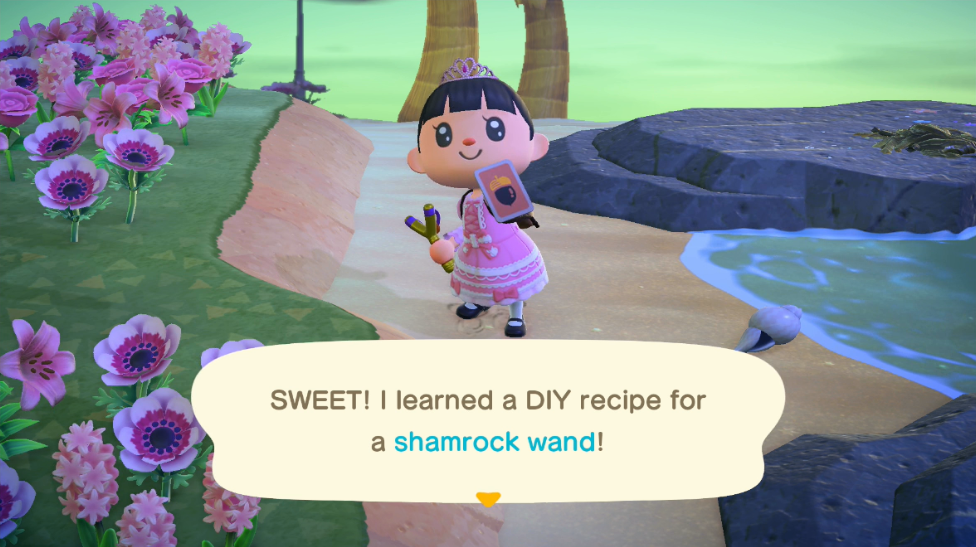 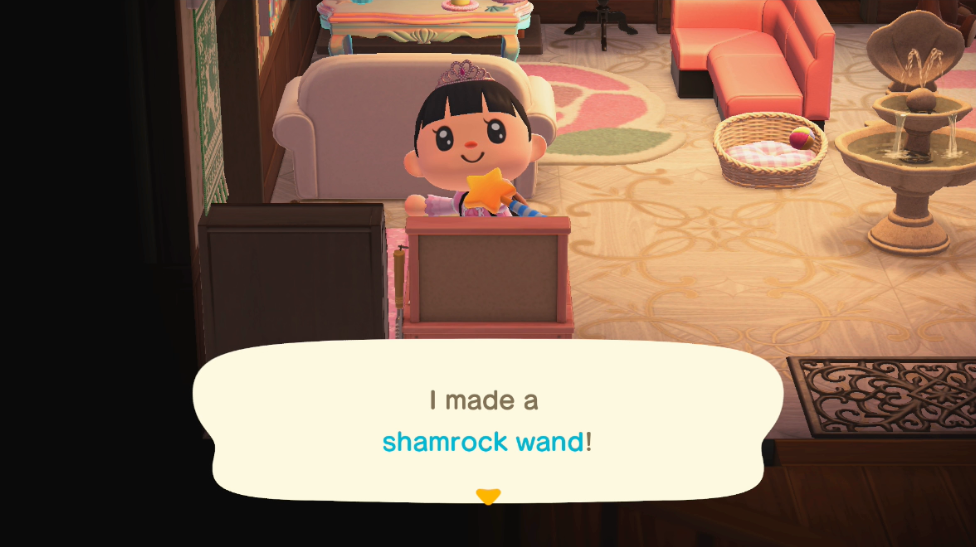 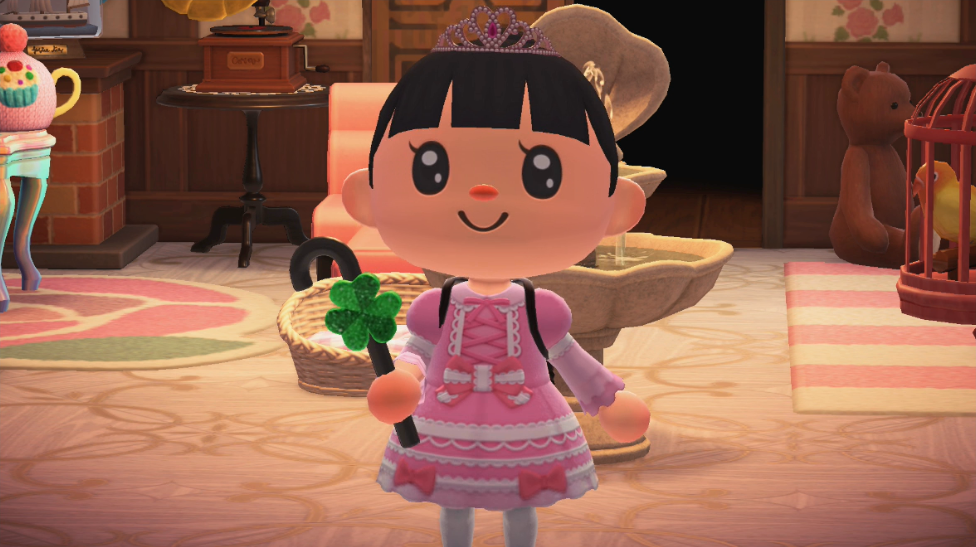 And that concludes the incredibly busy March so far… And we’re not even halfway. With the Sanrio items coming in less than a week now, I finally managed to get all my Amiibo Cards out from their box (as we’re still moving and rearranging things) which means I can finally scan them all. 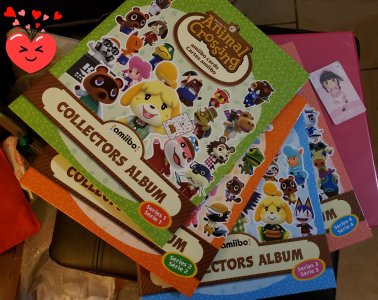 While I won’t be making an entry for it (there isn’t much to say), I will update this post when I finish :) And there will be a video up on my Youtube channel! As for the next main post… You won’t have too long to wait– it’ll be after the upcoming update on the 17th!

To end this off though, just one last picture at my second favorite time of day during my favorite hourly music:

If I could somehow mix that sea green sky with the pink goldeness of everything at 5PM/6PM, I think that would perfectly encompass my island. 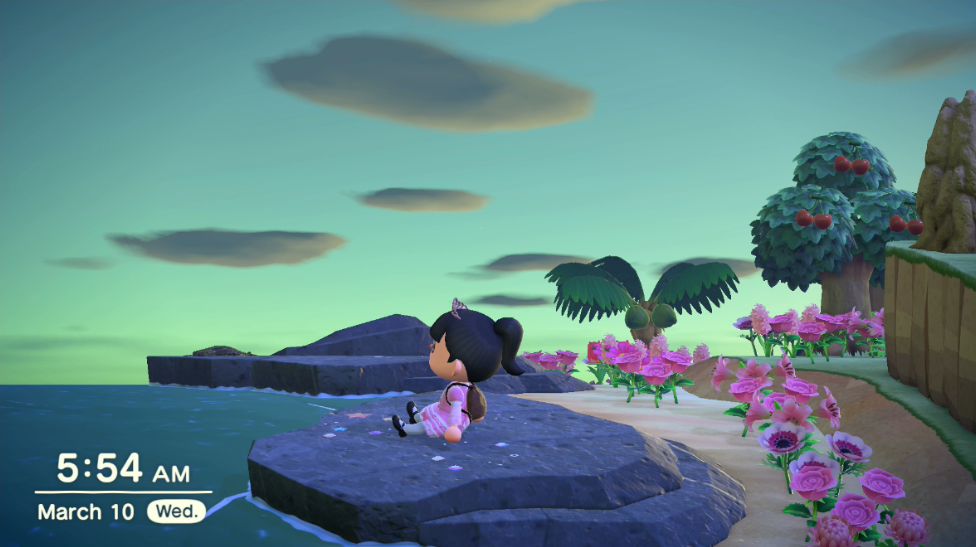 Edit: As promised, I did finish my Amiibo Card Scanning video! All 461 have officially been scanned:

I never realized how finnicky it could be to scan them all in, but I am happy they are all scanned now. I just hope there may eventually be some cards for the new posters too as not having all of them in the Nook Shopping catalog bugs me even more when I’m just missing those 6 now…