So, while I’ve finished most of my main goals to the best of my ability, I’m still logging in each day to do some random things. With the Scar update on the horizon (and with a date!! Next Wednesday!), I wanted to make a post talking about what I’ve been doing since my last update and up until that new patch hits. While I don’t expect too much happening after I make this post, any small things that do will be added on and then you can expect my usual journal entries once the Scar update hits!

The short version of this post is that I’ve mainly been focusing on buying out Scrooge’s Shop, trying to get more memories, and working on completing Dreamlight Tasks.

You’ll notice that Exterior Decorating is not on there so if that’s what you’re hoping for from this post, or even extended Interior Decorating, unfortunately that won’t really be happening just yet. I only find my inspiration when I know everything that can currently be gotten and I’m not even halfway through that furniture collection— I’ve had awful luck with my Scrooge store and there’s a lot of items I’ve seen others get that I am still impatiently waiting for.

Also knowing that there will likely be more characters to move in, I can’t help but want to just keep things more open right now. I do have SOME ideas and maybe even after the Scar or Toy Story update, I’ll consider doing a bit more clean-up and even finally doing the big Peaceful Meadow Revamp I’ve wanted to do since before the game launched, but right now, I’m mainly taking it easy on that front until I manage to unlock more of, well, everything.

With that out of the way, let’s talk about what has happened since my last post a month ago. Despite finishing most “bigger” goals, I’ve actually still been playing every single day.

Despite my lack of luck on some items, I’ve actually gotten several I’ve been really excited for. The round pool was a bit too big to replace the regular pool there, but I hope I can find a nice place to put it eventually. 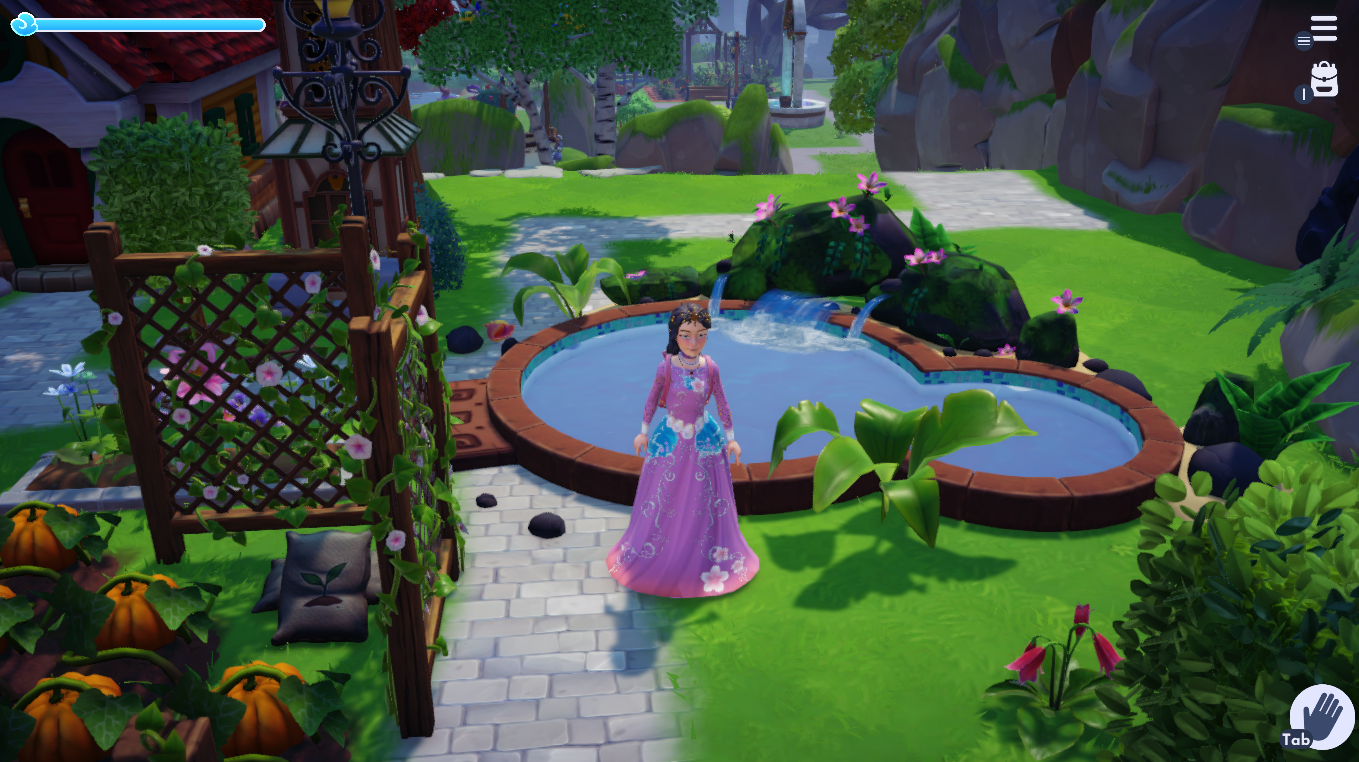 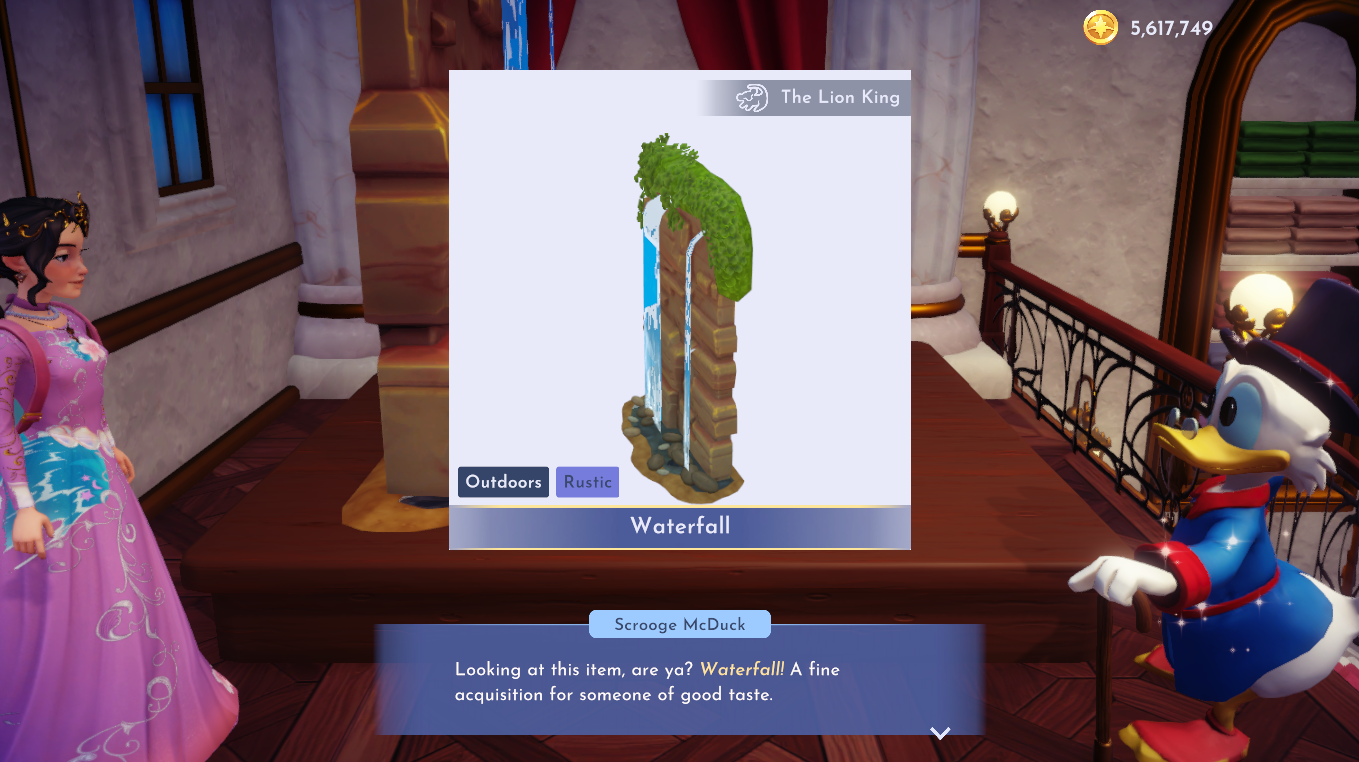 And while I haven’t done much decorating overall, I’ve been making more improvements to the “bedroom” and main room.

I also finally got the top I really liked from the ADT so now I have my full secondary outfit too! 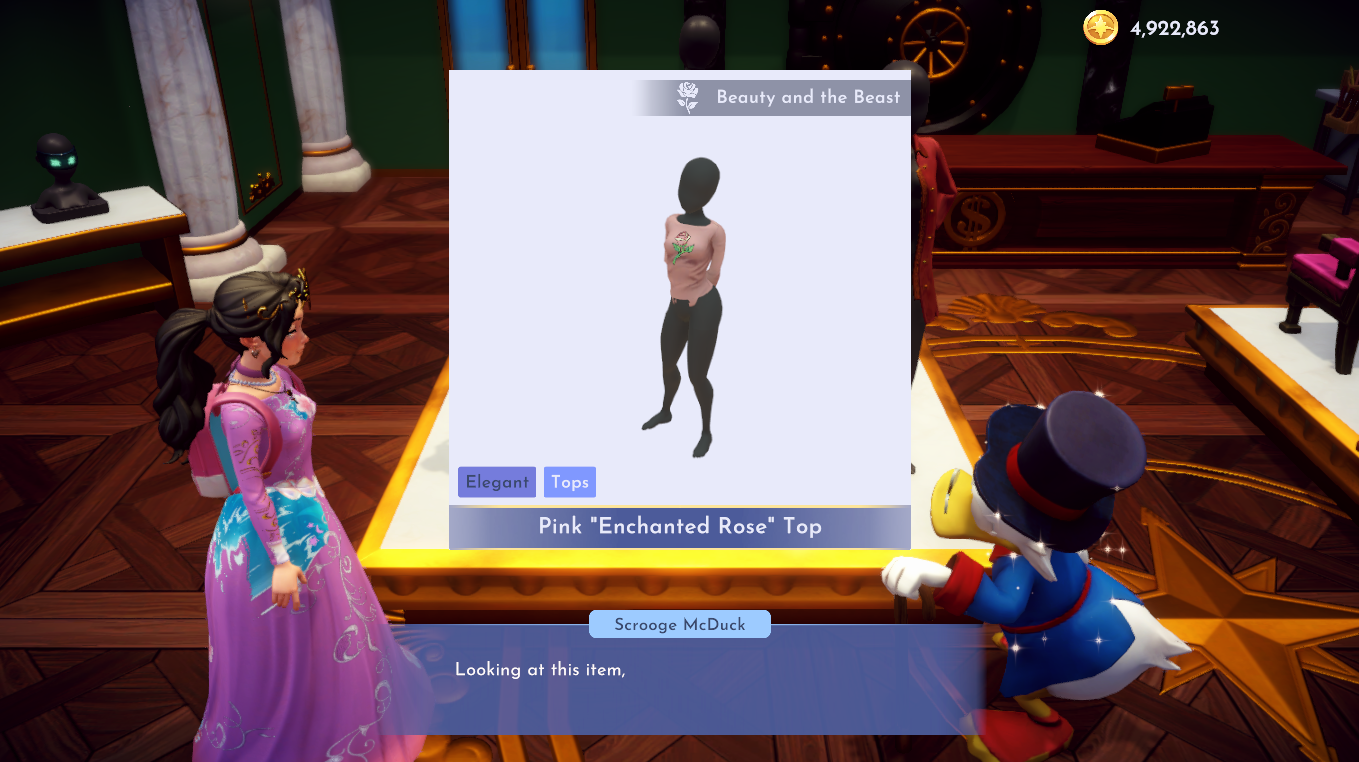 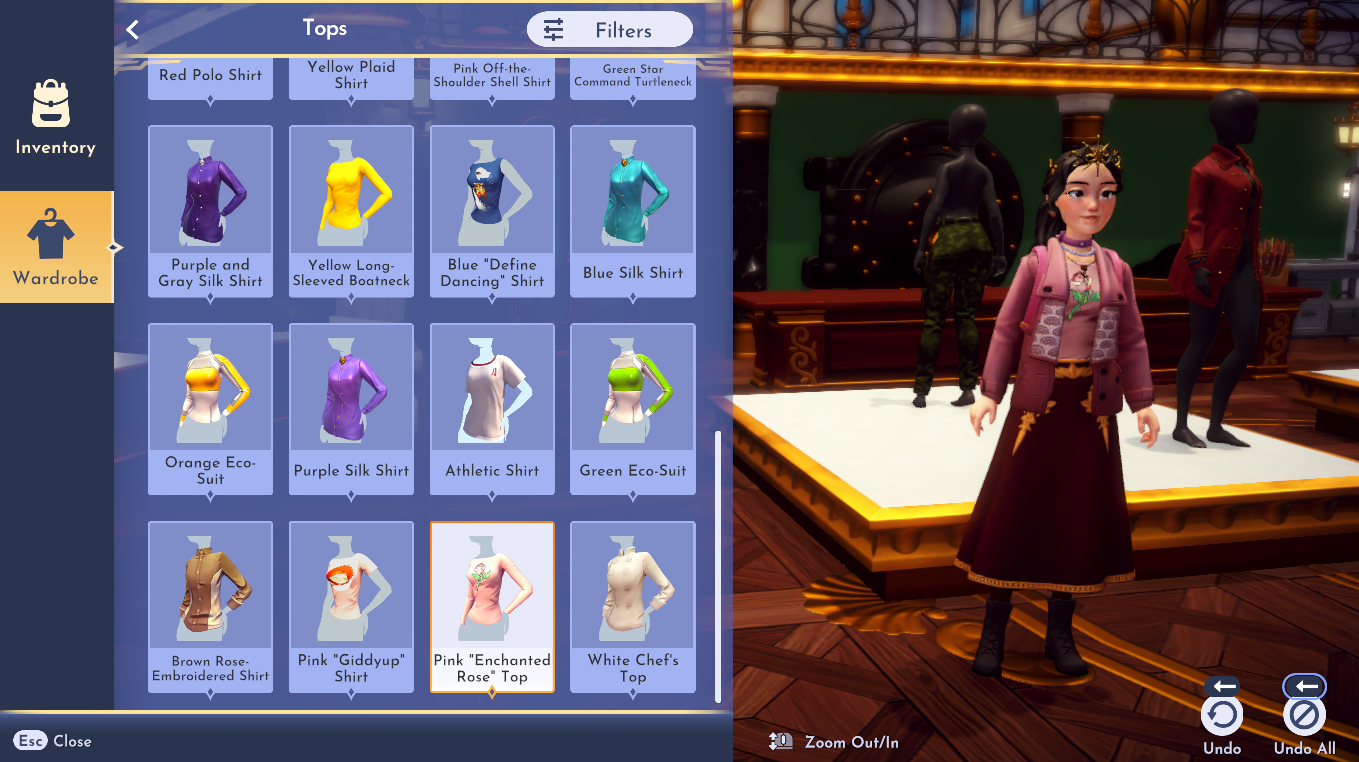 I also seemed to have unlocked all the Motifs, or at least I’m assuming since Critters haven’t given me a new motif bag in weeks, so I added a few extra details to my custom design dress: 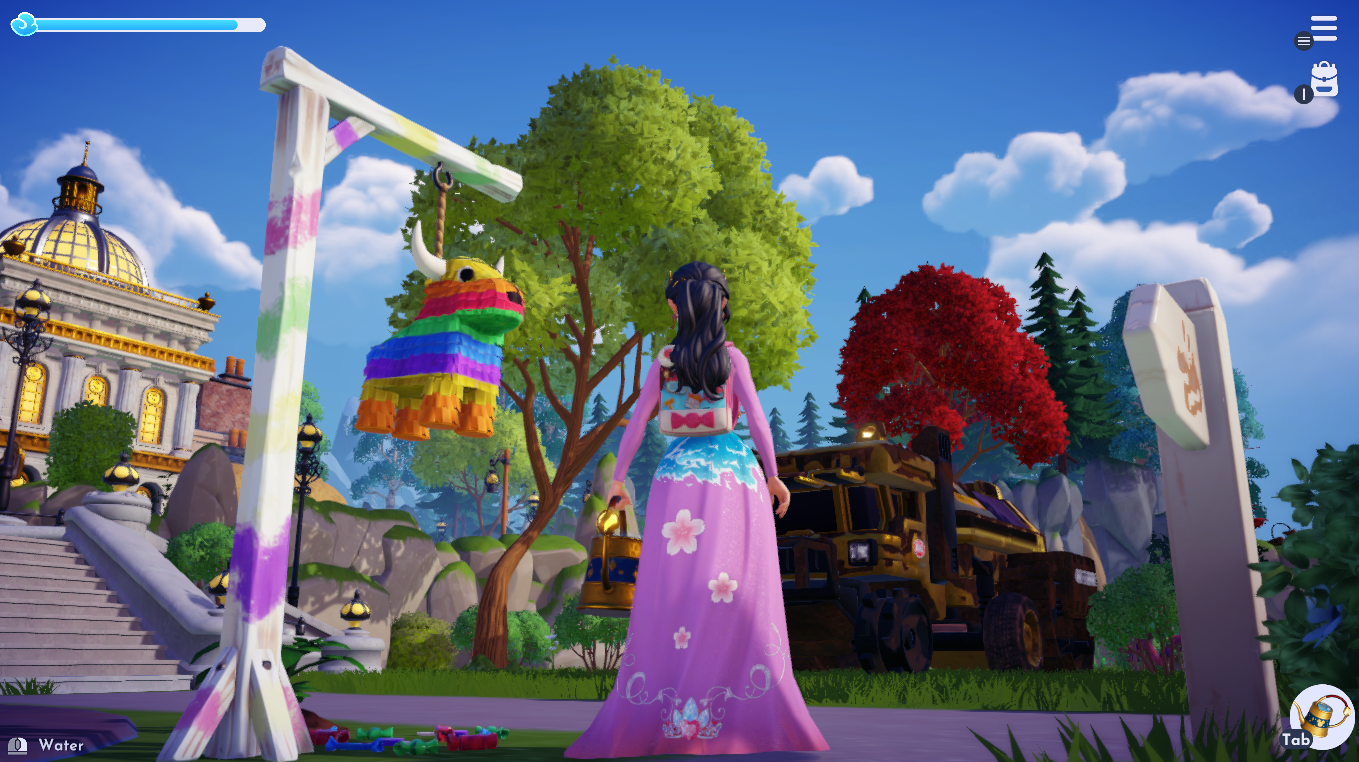 As mentioned earlier, I have been trying really hard to work on Memories, but honestly, I just have really rotten luck. About the only memories I managed to clear out were the watering flowers memories. That may be a lot of memories, but this still took hours of watering repeatedly. 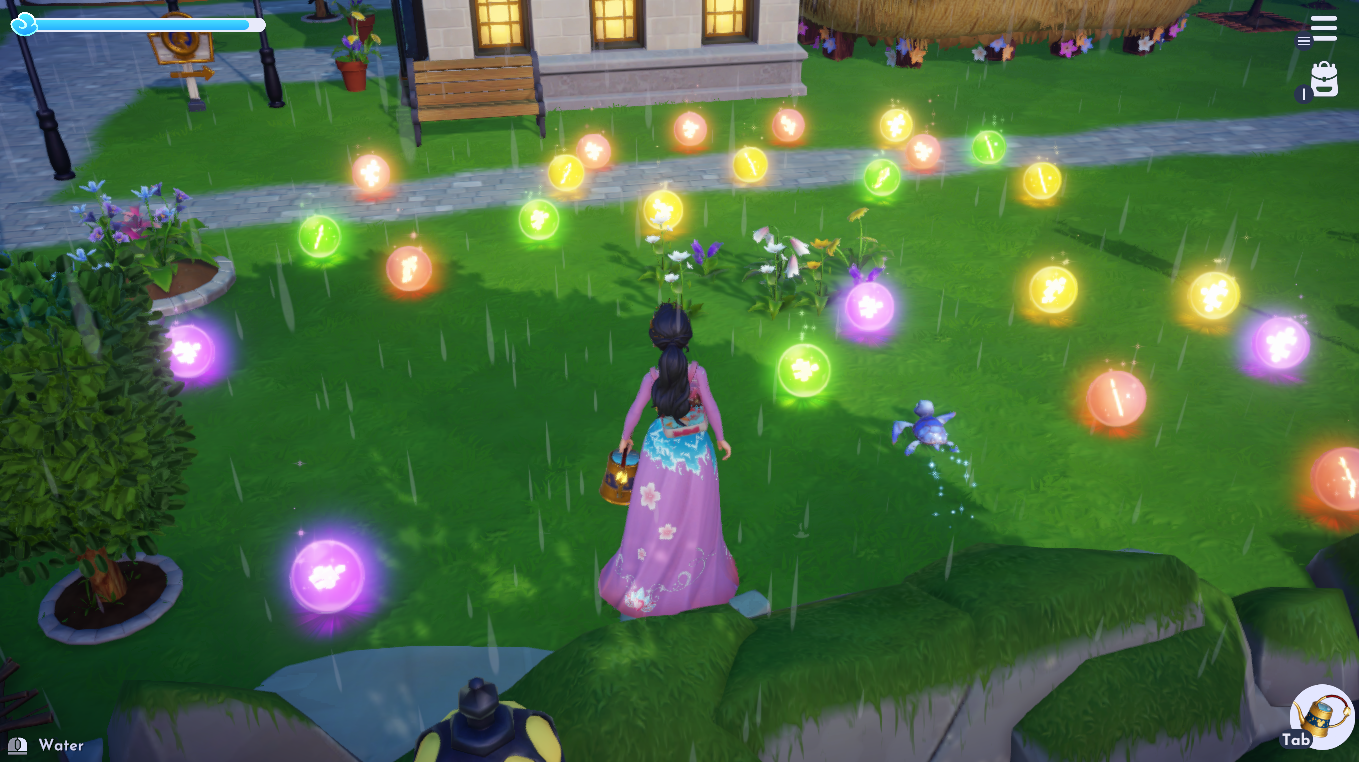 I also finally unlocked all the Critters! I still need Ravens, obviously, but hopefully we’ll see them showing up soon.

Finally… Dreamlight Tasks. I’m not sure when exactly my tree grew to such a point, but I suppose it’s proof of how hard I’ve been working on tasks. Most left are just ones I have to wait weeks on at this point, but the one that continues to allude me is fishing 100 times in a row. I may try and do a stream or something before the update hits specifically for trying to finally hit that goal. 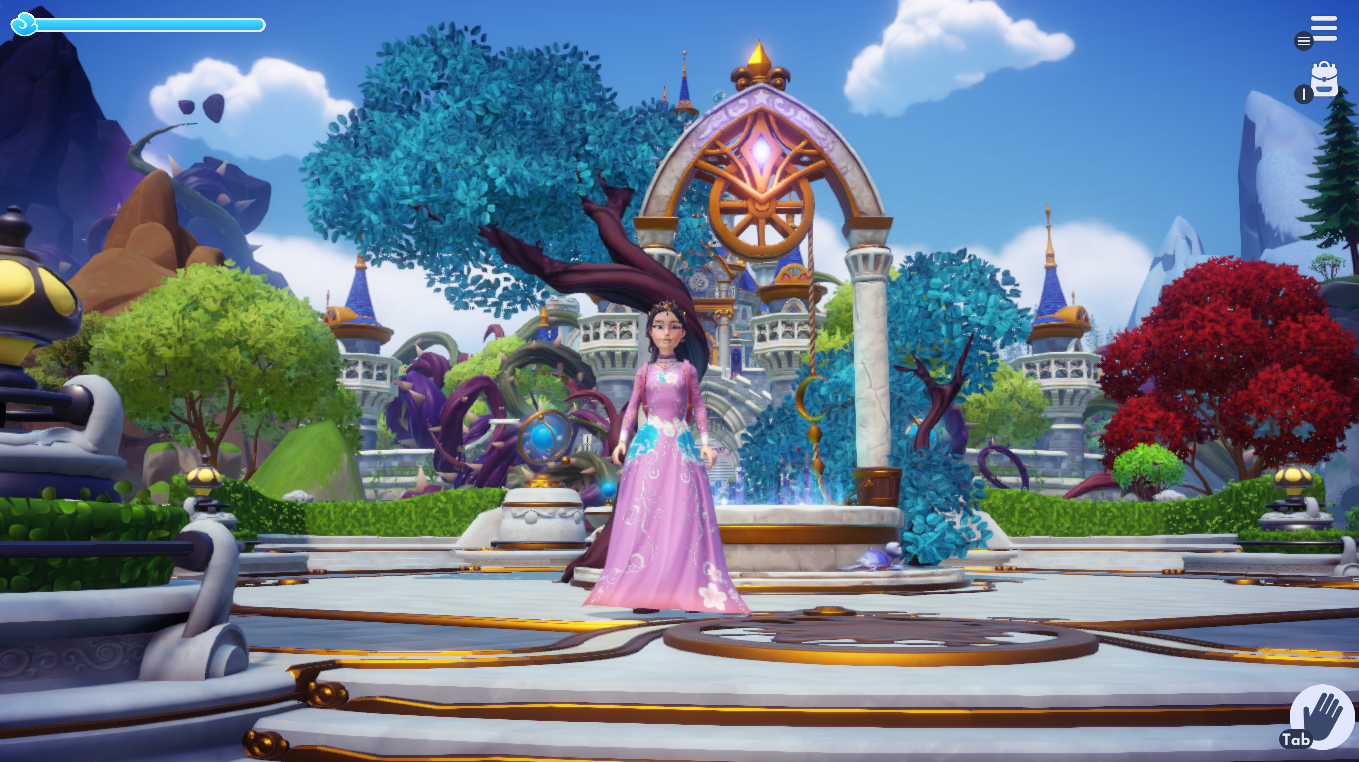 I’m continuing to poke in each day for now. Any other neat things I feel like adding I’ll add on below… Otherwise, look forward to my next post when the Scar update hits next week!

But as one last thing before that, some predictions/hopes for the Scar update:

-Finally set up a proper storage area. I’ve had so many things laying around so… I did add more of the Tables I was initially using since taking this picture. 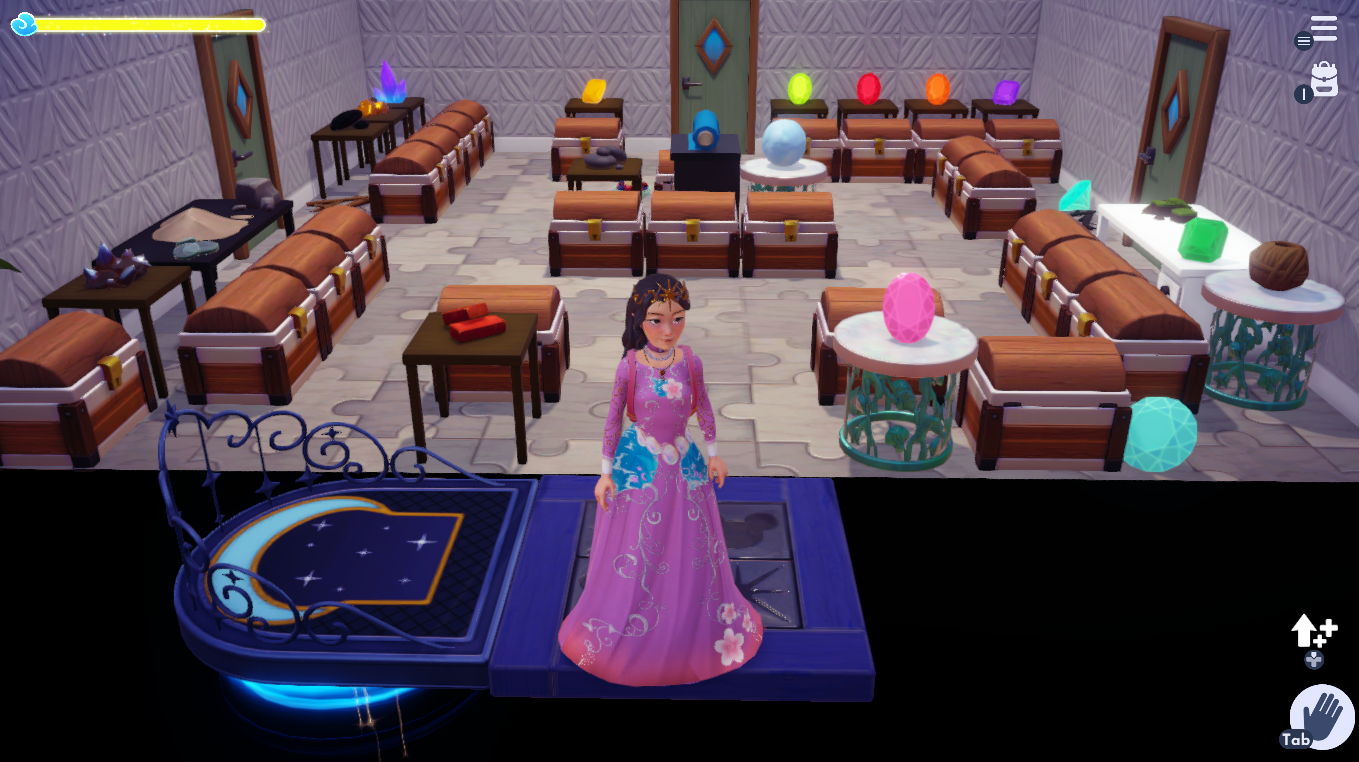 -While I’m still not doing too much decorating, I’ve been wanting to add some of the water lilies to Peaceful Meadow for a while so I finally did so: 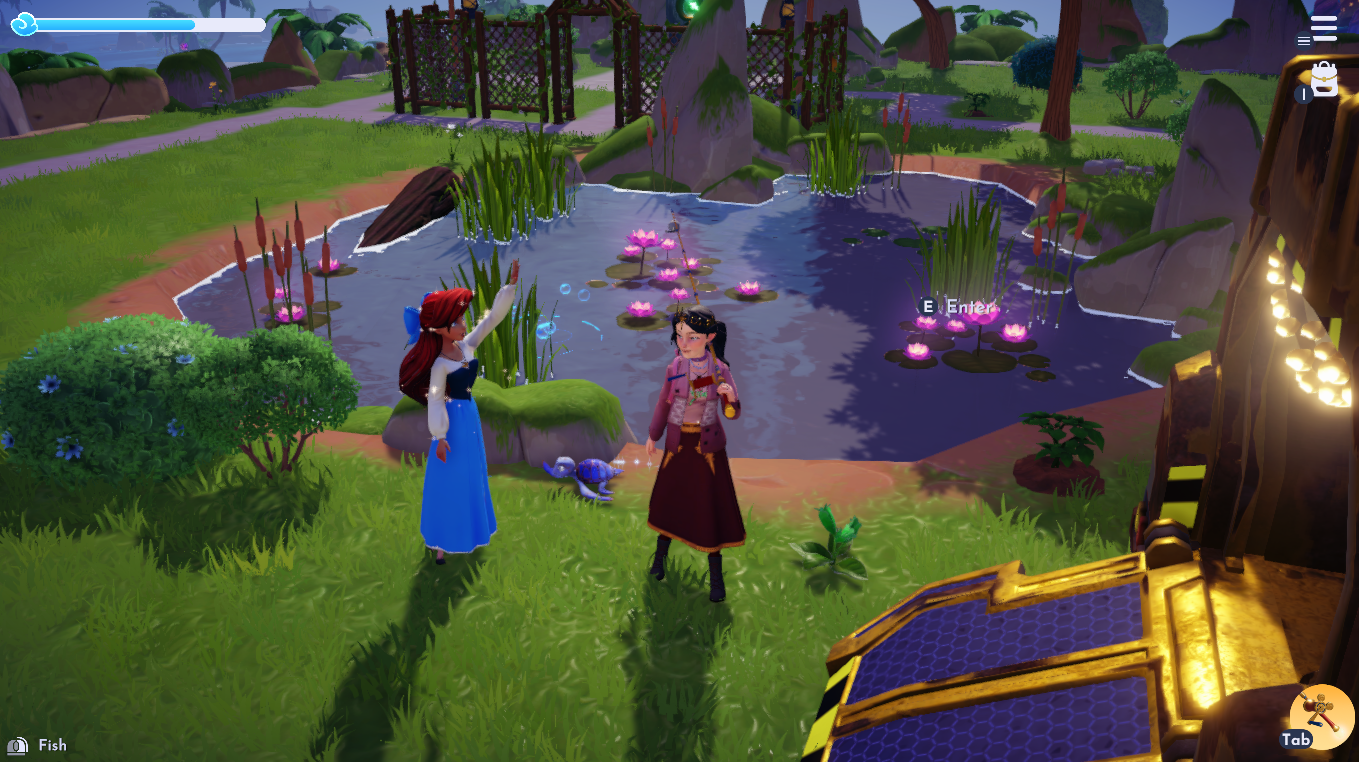 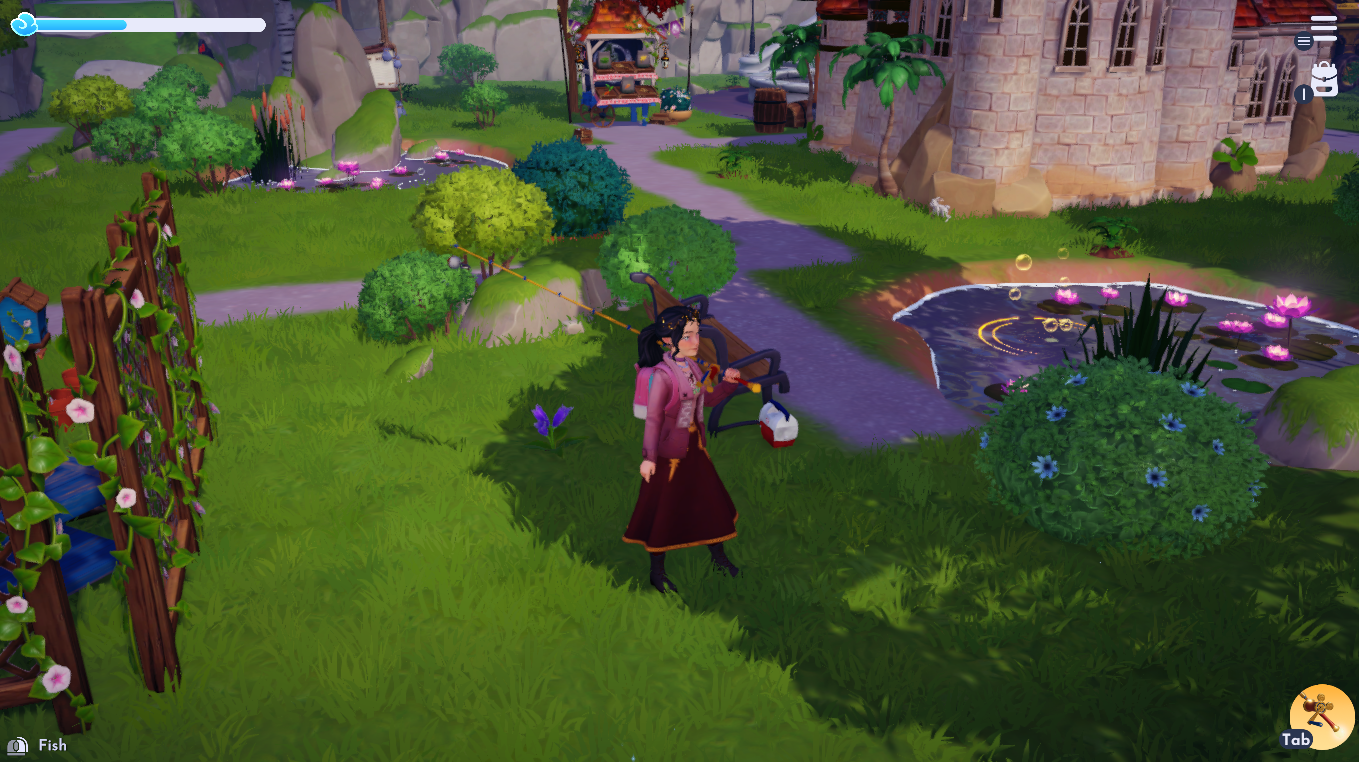 -And the last thing I had been trying to do was focus on Cooking Memories. It had won my poll and cooking at Remy’s would save on coal, but the rate is abysmal. These photos are after roughly 10 hours of cooking each. And more than half were coins despite how many I still needed. In the end, despite days of work, I still need like 20-30 memory pieces and only completed one cooking memory overall :( 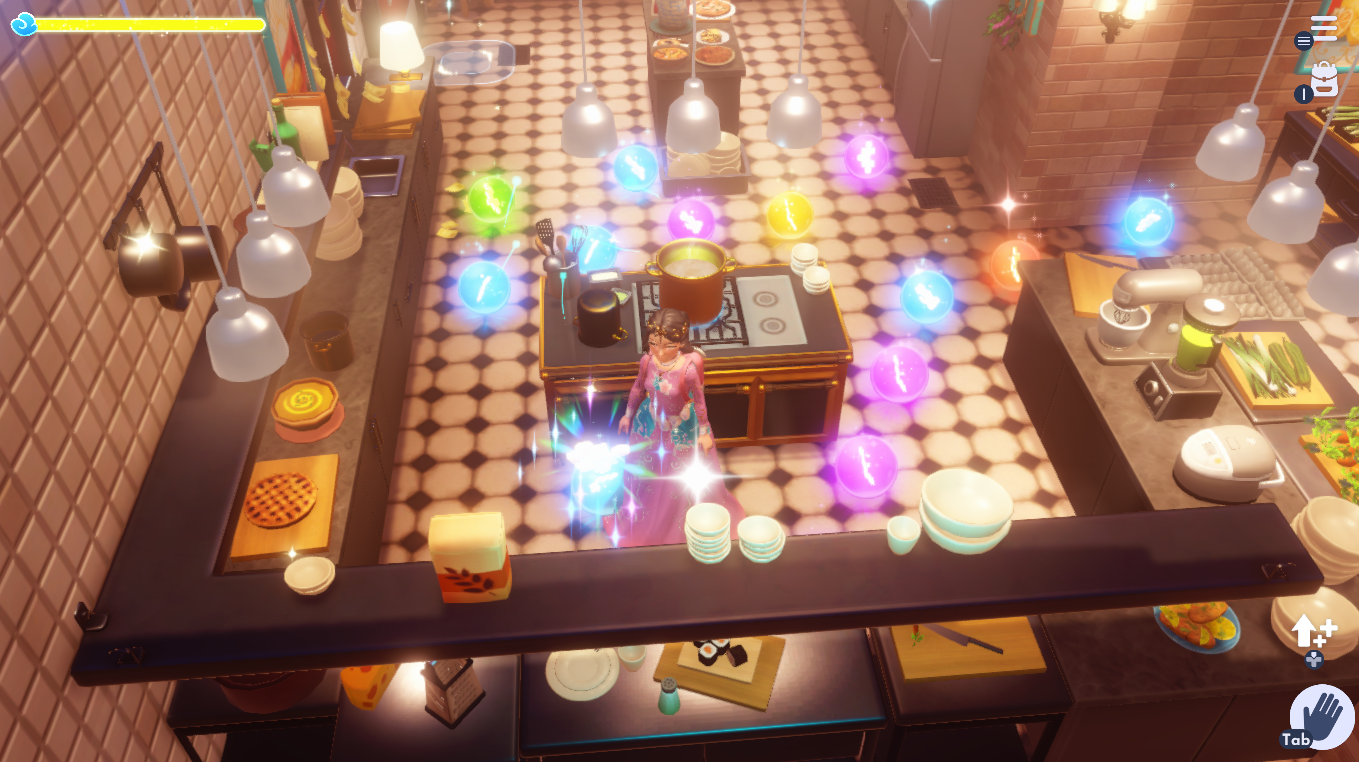 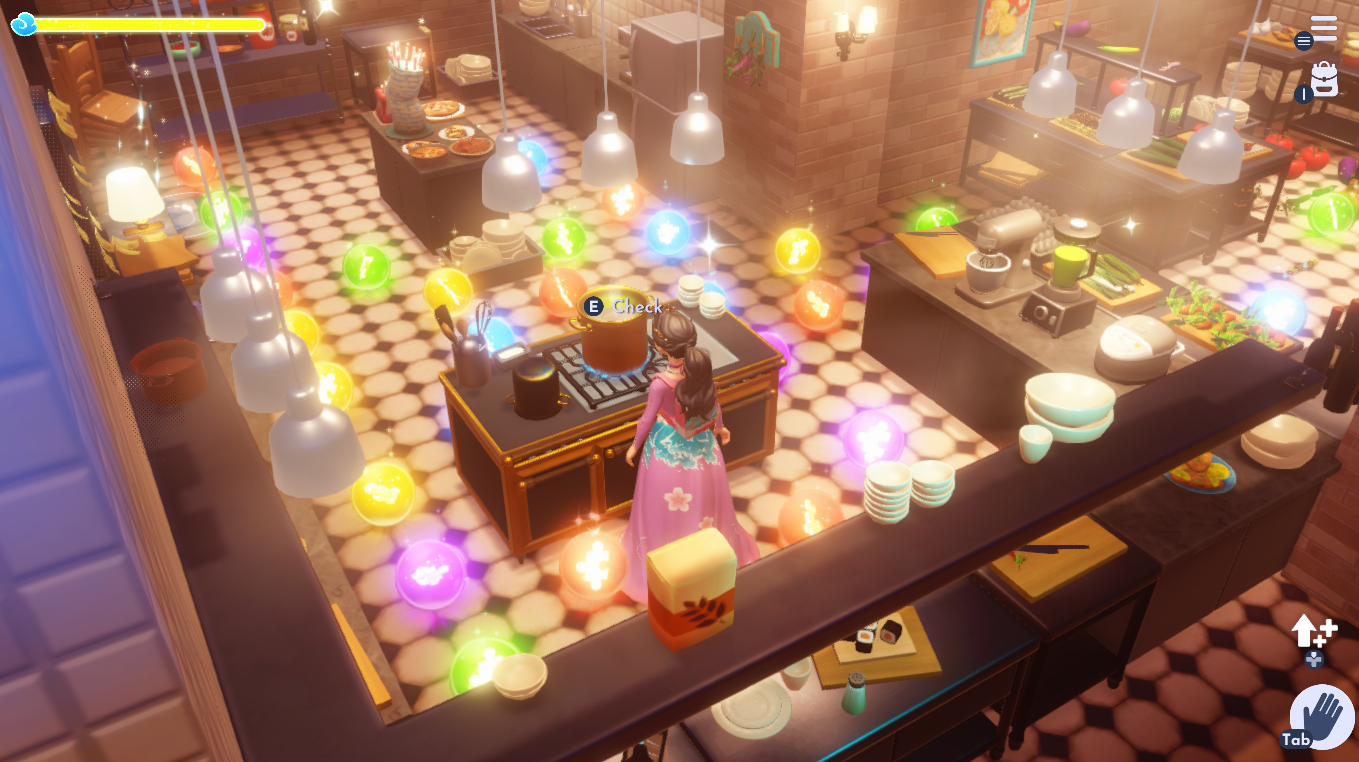